How a Salesman-Turned-Citizen Journalist Covers Conflict in Syria 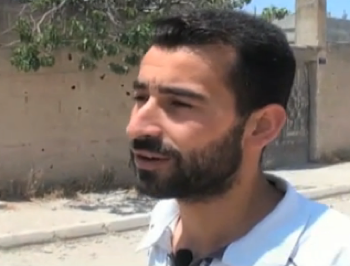 Hussein went from selling apartments in Quasir, Syria, to helping videotape the revolution there, including helping foreign journalists from neighboring countries

Just before the Syrian revolution became increasingly violent eight months ago, Hussein worked for his family’s real estate company showing apartments around the city of Quasir. That all ended when frequent bombings and gunfire between President Bashar al-Assad’s forces and Syrian rebels turned the country into one of the most dangerous places in the world. Most jobs in Syria, including Hussein’s, disappeared.

Blockades and attacks on foreign journalists in Syria have made real-time information about the conflict more and more scarce. Hussein, a pro-revolution activist who asked not to use his last name for fear of retribution, began taking pictures and videos of the violence and sending them to TV stations, free of charge, filling the void for media footage of the conflict and showing the effects of conflict on daily life in Syria.

Broadcasters are increasingly relying on untrained citizen journalists like Hussein for insight into what's going on inside countries where governments restrict access.

Broadcasters are increasingly relying on untrained citizen journalists like Hussein for insight into what’s going on inside countries where governments restrict access. In this short documentary video, Storyhunter correspondent Ricardo Garcia Vilanova treks along with Hussein to see what life is like for the former salesman turned journalist.

A Day in The Life of a Syrian Citizen Journalist from Storyhunter on Vimeo.

Alexander Ragir is a co-founder of Storyhunter, a premier global network of video journalists. With Storyhunter, he helps oversee the production of web documentaries from all over the world. A former foreign correspondent for Bloomberg News in Rio de Janeiro, he frequently contributed to Bloomberg Markets and Businessweek magazines. He’s worked for the Associated Press in Sao Paulo and produced video documentaries for Current TV. Twitter: @storyhunter or @alexragir

This piece is a cross-post from Storyhunter, a network of professional video journalists that produce online documentaries from all over the world, and was published in Spanish on Yahoo Mexico. Follow @storyhunter for Twitter updates, here on Facebook or go to www.storyhunter.tv