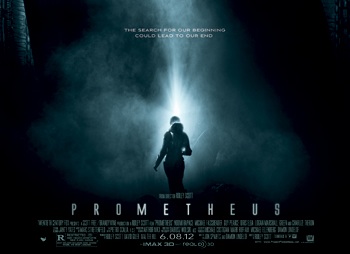 Ari Karpel, writing for Fast Company's Co.Create describes the marketing campaign for Ridley Scott's "Prometheus" as "unquestionably, one of the most original and absorbing in recent memory."

Our mass media ecosystem relies on a constant flow of money to sustain itself in its present form. This money comes from many directions, including but not limited to TV advertising revenue, basic and premium cable subscriber fees, and movie box-office receipts. This revenue is gathered by various gatekeepers, who take a cut and then send monies back to production companies, movie studios, and cable networks that provide the programming that keeps the ecosystem filled with content.

A new crack in this mass media ecosystem is now affecting that money flow.

Suddenly a billion dollars gets shaved from movie studios' annual TV ad spend. That is a billion dollars less in revenue for the major broadcast and cable networks that have traditionally shown movie ads to their audiences."

Ironically, this crack is being created by one of its own players, the movie studios.
In 2011, the movie studios collectively spent $2.9 billion on television advertising to convince people to show up at movie theaters for their new releases. Today, however, new media strategies allow studios to promote movies more effectively and at a substantially reduced cost, all while bypassing TV advertising altogether.

This new method involves creating online experiences that replace what TV advertising has usually done: create the desire that leads to a consumer action. This takes advantage of what Tim O’Reilly refers to as the “architecture of participation” that is built into the Internet.

Part of the marketing campaign for ‘The Hunger Games’ movie included this site, on which fans can interact with the plot of the movie.

Fast Company analyzed two movies that used this approach, ”The Hunger Games“ and “Prometheus.“ Read both pieces to get a glimpse of a future that will replace TV ads. The details are fascinating.

In both cases, the studios’ marketing teams created large story worlds that immersed their participants in a variety of media. These story worlds have game play, various kinds of video, and user-generated content that is spread across multiple platforms, (Facebook, Twitter and tumblr, among others), and move across multiple screens. They weave a story that’s inspired by the film’s narrative and additional narrative that is created by fans.

This has nothing to do with buying ads online.

Instead of buying ads online, the studios create an online world that invites the user in, gives her a special experience (that she helps shape), and creates a desire to see the movie. The platforms that support this world do not require any permission or money from the world makers — they are all free for anyone to use. Thus costs are drastically reduced.

Think of it this way

A movie studio can now get rid of an approach that requires them to hand over large amounts of money to a centralized TV network to reach consumers and replace it with an approach that allows the studio to reach users directly — without paying a distributed network a dime.

In a recent article by Ronald Grover of  Reuters, it was estimated that Lionsgate spent between $15 million and $20 million less in TV advertising on “The Hunger Games” because of its successful social media efforts. It cut a third of its normal spend on TV ads and still got a large box-office return. Lionsgate dramatically increased its return on investment.

Imagine this occurring across all movie releases. Suddenly a billion dollars gets shaved from movie studios’ annual TV ad spend. That’s a billion dollars less in revenue for the major broadcast and cable networks that have traditionally shown movie ads to their audiences.

That is a lot of money to be pulled out of the mass media ecosystem.

We do not know how fast this will occur. However, rest assured that it will happen, and this approach will quicken its pace as more movie releases make it part of their plans and slash their TV ad budgets.

This is just one more example of how the Internet helps one business find a new way to connect with its customers at a much lower cost and, as a result, disrupts another legacy business.

And what makes it even more fascinating is that as a result of many media mergers, that other business is often another division in the same company.

Funny how the world turns when innovation runs rampant.

Chris Dorr is a digital media consultant. His clients include MTV Networks, Samsung Electronics of America and the Tribeca Film Festival. He can be followed on Twitter @chrisdorr. A version of this post also appears on Digital Dorr.