The Pirate Party Gains Steam Overseas; Will It Catch in the U.S.? 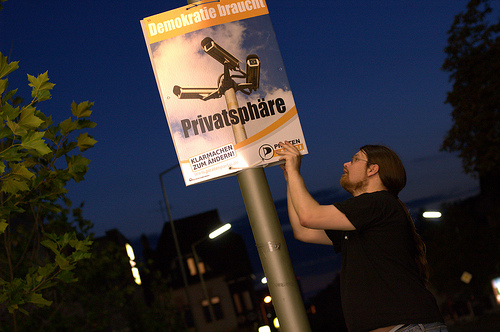 A worker puts up a sign for the Pirate Party in the run-up to the 2009 parliamentary elections in Karlsruhe, Germany. Photo by "Mela Eckenfels on Flickr":http://www.flickr.com/photos/felicea/3855042180/sizes/m/in/photostream/ and used here with Creative Commons license.

Meet Jan Hemme: mild-mannered public relations executive by day, Pirate by night — specifically, a strategist for Berlin’s Pirate Party. This new political movement, with roots in the tech culture, is shaking up politics across Europe and hopes to make some noise in the coming U.S. elections.

Given the exponential influence of digital media in the life of political parties, it was only a matter of time before a new party would be founded on a platform of digital activism.

As the public loses patience with Superpacs and lobbyists, 'Liquid Democracy' may offer a glimpse of political life to come."

Pirates of the Baltic

The party was founded five years ago in Sweden, a country that prides itself on its “good hacker” culture, by Rick Falkvinge, a self-described “tech entrepreneur who loves whiskey.” Falkvinge’s platform originally focused on copyright and patent law reform, online privacy, and government transparency. The movement has grown dramatically, and there are now an estimated 40-50 national Pirate Parties, plus at least eight state parties in the U.S.

Falkvinge (who changed his name to the Swedish word for “falcon wing”) was a high-flying campaigner until he ran into financial difficulties. In 2011 he resigned as head of the party to become a “political evangelist,” and was succeeded by Swedish author and publisher Anna Troberg.

The Pirate Party has made a splash in Sweden, but its real muscle has emerged in Germany. The German party has elected members to state parliaments in four regions, with 7-9 percent of the vote in each case. As Angela Merkel’s Christian Democratic Union struggles with the economy and the ailing European Union, the public has responded to the Pirates’ post-modern approach. The party has stuck to core issues around Internet freedom, but avoided any pigeon-holing on the left-to-right spectrum. (This elusive quality has led media such as Berlin’s Cicero magazine to label them The Party Without a Plan.)

The Pirates’ real intent is to disrupt politics-as-usual. The Berliners are approaching this mission through an online project they call Liquid Democracy. The idea is that an individual member of the party can introduce a motion on an online platform called Liquid Feedback, which is divided into policy areas. Party members then discuss the motion through channels such as mailing lists, Twitter, and Mumble.

The proposer can accept or reject amendments, and other members can offer counter-motions. If at least 10 percent of the members registered in the policy area participate, a vote can take place, which moves the idea towards inclusion in a party platform. According to Jan Hemme, “Liquid Democracy allows people to vote at any time.” He added that the software is currently in beta for a 2.0 update. “The new interface will be more Facebook-like.”

Hemme claims that the strength of the platform is that it allows people to vote on single issues, bypassing special interests and gatekeepers to elected officials. He gives the example of citizens who might be affected by the noise levels of an airport, and could use the channel to object. This could be an invitation to nimby-ism, given that party members may promote their individual interests. (After all, who actually wants a noisy airport in their backyard?) On the other hand, the platform allows voters to bypass the political potholes of lobbyists and financing that currently stand between voters and policy-making.

According to Hemme, “Liquid Feedback has been very successful in Berlin,” where the bungling of new airport construction has been at the forefront of the public debate. (Hemme’s particularly pleased that the Pirate Party will be heading the parliamentary inquiry on the matter.) The Pirates have worked closely with the environmentalist Green Party, and recently the head of Occupy Berlin became Pirate party whip.

Hemme reports that although the party is tech-based, it also struggles with technology. “We have a party member who’s trying to connect with Ushahidi,” he says. “We have experience with low bandwidth, because at our assemblies the Internet always breaks down.”

In France, the Pirate Party made its official debut in the June 10 elections, where its laconic slogan was “Voter Pirate, pourquois pas?” The Pirate Party has also been active in the former Soviet bloc, including the Czech Republic and Russia, where it’s had difficulty winning official status. (The Russian government helpfully sent the party a letter explaining that its application was turned down because piracy is defined as an attack on river or sea vessels, a crime under Russian law.)

It may be that the multiparty parliamentary systems of Western Europe offer the Pirates their best opportunities, since minority parties can achieve influence through coalitions. It will be a bigger challenge in the two-party system of the United States, where minority parties have more trouble gaining traction. On the other hand, as the public loses patience with super PACs and lobbyists, and global netizens gather strength, “Liquid Democracy” may offer a glimpse of political life to come.

Anne Nelson, a specialist in international media, teaches New Media and Development Communications at Columbia’s School of International and Public Affairs and consults for a range of foundations. She is the author of a series of CIMA reports and a 2009 book, Red Orchestra, on anti-Nazi resistance in wartime Berlin. Her publications can be found on academia.edu and she tweets as @anelsona.