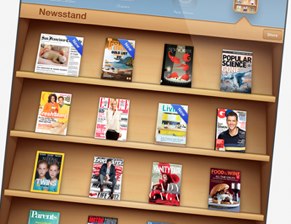 Being a successful iPad magazine means knowing how to market, including how to interact with Apple's Newsstand.

It seems like publishing a digital magazine on the iPad should be pretty easy. With some basic design skills, time, and a bit of money, publishing an independent iPad magazine is possible. But being successful — rising on the Apple Newsstand charts, continuing to gain readers, and making money? Those are much tougher goals.

I feel like with the iPad, I can make the magazine personal as much as I can, and can keep it cheap enough for people to buy." -Tim Moore

Michel Elings co-founded TRVL, an iPad-only travel magazine, with Jochem Wijnands. Based in Amsterdam, TRVL has now published 60 individual “issues,” each an in-depth, photo-rich feature on a specific destination. Elings, a self-described “Apple fanboy,” met Wijnands, a travel photographer and writer. Both wanted to change magazine publishing for the better and saw an opportunity to collaborate.

A recent issue of TRVL.

MediaShift: How did you start TRVL?

Elings: Jochem has always been responsible for the content. I was responsible for design and technical stuff. I had to learn InDesign in a day. It is quite funny to see now what I did then. We started off with all the mistakes that others are still making. We did all the conventional stuff, like having a cover with multiple articles in the magazine, publishing once a month. We had a free app with paid content, and no one liked that. We decided to make everything free, and to publish by the article. All our issues are timeless. This added some great advantages. We have one destination per week. We publish it for free, and every week, a new one is added. After [these changes], we had only five-star ratings.

Elings: We are really into less is more. I turned off 90 percent of what you can do with WoodWing [design software] because I don’t think it helps the user … [Also,] I don’t think a monthly magazine works because you never use the algorithms of the App Store. When you publish new content, the App Store ranks you higher the next day, so when you publish, you are in a good position for the weekend. When you only do this once a month, you never use your advantage.

Elings: We try to make the content feel really personal. We don’t crop photos, and we don’t put text on photos. We respect the photographer and writer. We want to give people the feeling that a writer and photographer went to Amsterdam, and this is what they’ve seen. We really try not to put a filter between it … We don’t talk about how much it costs to drink something at Times Square, but we try to get the feeling of when you step out of a cab in Times Square, the wind blows through your hair, coming through the buildings … From a technical standpoint, we try to make our issues as small as possible. We really believe in the human scale. When you don’t have paper in your hands, it’s hard to see when something ends. You need to have the feeling of when the magazine will finish. People know we’re 50 to 60 pages and about 3,000 words … Also, we only go from left to right [in page navigation]. That’s the only convention I still love, because you won’t feel lost.

Elings: We are going to do different things. We will publish one issue a week, growing our library. We’ll be doing some new titles within TRVL. We will extend our photobooks. We’ll translate TRVL into multiple languages. I think we’ll grow even faster. We just have to work harder and have more patience than the major publishing houses.

Letter to Jane is an arts and culture magazine featuring photos and interviews. Creator Tim Moore is now finishing his fourth issue of the magazine, which became an iPad publication after unsuccessful experiments with selling PDFs and print-on-demand issues through MagCloud. The fourth iPad issue has been funded partly through about $6,000 in Kickstarter support, and some donors will receive Moore’s code for the magazine so they can build their own magazines.

MediaShift: How did you start Letter to Jane on the iPad?

Moore: I had a big tax refund, and I bought [an iPad]. It was one of the few pieces of technology I really fell in love with … I started really small. I found simple code things on YouTube, and the software got a little easier with each update. The first issue was really bad, but people liked it … I devoted a lot of my time to learning how to code. I’ve really been learning as I go what I want to do. I feel like with the iPad, I can make the magazine personal as much as I can, and can keep it cheap enough for people to buy.

Moore: Time is the biggest thing … I get a lot of emails saying, “I’d love to do what you do.” But even if you’re an expert at something, it’s such a new market. No one’s really cracked it yet. It takes a lot of time if you design something to test it, to live with it. People have this other thing and just want to create a new revenue stream, but you really have to want to do [a magazine] — you can’t just tack it on.

Moore: When the iPad and apps first came out, it was, “Look at all the capability this device has.” I always felt kind of insecure about this, but … I did something simple, and I kind of got rewarded for it … The New Yorker app is the best on the Newsstand. It does simple well. Others are so graphic-intensive on a small screen … The industry is starting to learn that readers don’t necessarily want to be blown away. They don’t need a new layer on top of what you’ve already been giving them. That’s something that indies do very well.

What are your plans for the future?

Moore: I’m still really into print. I go to newsstands a couple of times a week. I’ve seen a big change in print, that magazines keep getting bigger. That’s the place where [iPad magazines] can fit. There have been huge stretches of time between my apps. After this [fourth] issue, I want to move Letter to Jane into a space where I can do four interviews quicker. I can do smaller, more focused things on a more frequent basis … I have this theory that I might be able to have a social life again some day.

The newest magazine in this group, the Toronto Tempest, just launched in March. James Burrows, co-founder and co-editor, is a recent college graduate who was dissatisfied with mainstream Canadian journalism and wanted to provide a different perspective on politics and activism.

The first issue of The Toronto Tempest.

MediaShift: How did you decide to start an independent iPad magazine?

Burrows: I did some stories alongside [the CBC] as a student journalist and was very disappointed in how they were covered. Plus, journalists are feeling the squeeze from cutbacks there. We had the idea to start a newspaper, and we eventually turned that into a magazine … Last fall, [co-founder Simon Wallace] approached me, and said the costs for an iPad magazine were coming down. We thought that would be an opportunity to take a chance and see what would happen. We wanted something more interesting and more grassroots — on-the-ground journalism that had the time to look into more important questions, that would cut across traditional narratives and party lines.

Burrows: Being clear about what your project will accomplish is really important. If you’re not really mainstream, or are trying to do something different, having a clear program is really important. And a lot of the back-end stuff was a challenge — knowing how to work with Apple, with Mag+ [design software]. Figuring that out took more time, and designing a magazine from scratch took awhile.

Burrows: During the next few months, we’re going to look at a bunch of things — fundraising campaigns and advertising. We have other things on the go, but we’ve been so focused just on getting out our initial media push a couple of months ago. It’s a long-term plan to try to grow our readership slowly.

Burrows: When you search for magazines in the Newsstand, you get, like, Field and Stream and the New Yorker. It would be nice to have some sort of alternative media community that would support alternative projects that aren’t necessarily trying to compete with [established mainstream magazines], to have a space on the Newsstand for alternative publications … There should be a way of getting our magazine promoted in the digital world, especially because Apple is just dominated by these large, already established magazines … Although we are alternative, we want to interact with the mainstream. It’s that dialogue between the alternative and the mainstream that we want to participate in.