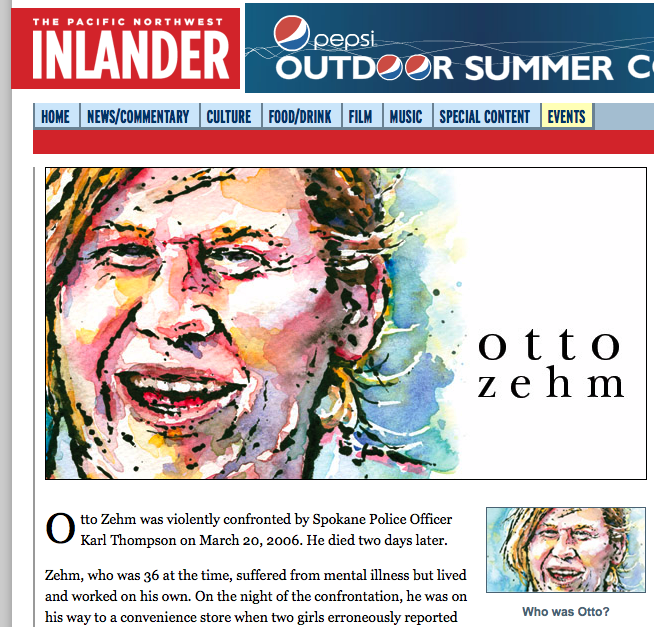 The story of Otto Zehm, a janitor in Spokane, Wash., who died after being beaten by police, has captured the narrative of the entire city's media landscape for more than six years.

SPOKANE, Wash. — For years, Otto Zehm lived an unassuming life on this city’s margins — working as a janitor during the day, eating dinner in convenience stores at night, playing guitar with his friends. In the spring of 2006, that quiet life ended after Zehm was taken into police custody for a crime he didn’t commit.

Today, Zehm, who died at age 36, is memorialized with a Wikipedia page, a Facebook page, and various Twitter hashtags.

By sharing and dissecting the stories online, this community provided a continual feedback to the city's journalists, affirming that the Zehm story -- even as the years passed -- remained an issue of critical public interest."

Zehm’s story didn’t simply go viral, a momentary blip on the mediascape. In Spokane media, Zehm’s story went viral and stayed there — for six years. In a 24/7 news universe — where a story that breaks in the morning often feels stale by the 5 o’clock news or the next day’s printed paper — the saga of Otto Zehm has captured the city’s media narrative for more than 70 months.

To understand how, it’s important to look at what digital and social media provided — and did not provide — to one of the most sustained efforts ever at covering a crime story in the Pacific Northwest.

how the story landed

It has been de rigueur for the past decade to attribute some aspect of a media narrative to social media, technology or citizen journalists. In the Zehm case, social media played a relatively small role in how journalists reported the story. Yes, reporters tweeted from the trial of a police officer, providing real-time updates to online followers. But the reporting — from public records requests to court filings to interviews — was classic shoe-leather journalism.

Rather than informing or directing the reporting, however, an online community of readers and viewers shaped how that reporting landed within the community, which was critical to propelling the Zehm story from one news cycle to the next. By sharing and dissecting the stories online, this community provided continual feedback to the city’s journalists, affirming that the story — even as the years passed — remained an issue of critical public interest.

Yet still, the public appears to have a ravenous appetite for the story. So far this year, four of the Spokesman’s five most-discussed stories deal directly with Zehm, often sparking more than 200 comments per story — a remarkable number for the midsized metro. That instantaneous feedback helped validate the story’s importance for readers and journalists.

“I can assure you that not one reader, online commenter or letter writer has suggested to me that it is time to drop the story,” Gary Graham, executive editor of the Spokesman, said in an email last month. “There’s more to come, and I think readers understand that now.”

There is, however, a danger in overemphasizing the role of online commenters in driving the story, which undermines the work of the journalists. Indeed, when the Zehm story first broke in 2006, the newspaper’s website didn’t even allow comments on online stories.

But once Spokane journalists began uncovering the tragic missteps of the night’s events, as well as the strange happenings after Zehm’s death, the online community demanded more and more.

“I firmly believe that if the Spokesman-Review had not continued pressing, this would have disappeared with nary a ripple,” Addy Hatch, the paper’s city editor, said in an email. “Now, it’s been one of the catalysts to driving real reform in the police department and contributed to a mayor’s ouster.”

‘All I wanted was a Snickers’

For the city’s journalists, the Zehm case provided classic narrative archetypes. Zehm represented the city’s most vulnerable: innocent, ill and voiceless. Zehm had no criminal record, but a long history of mental illness. He worked diligently, looked out for his co-workers, and on the night of his arrest had committed no crime. A 911 caller erroneously suspected that Zehm — who had stopped taking his prescription medication — had stolen money from an ATM. Responding police beat Zehm with a baton, Tasered him repeatedly, and used ties to restrain him on the floor of a north Spokane convenience store. Twenty minutes into the encounter, he went into cardiac arrest. He died two days later.

His last words on the floor of the convenience store: “All I wanted was a Snickers.”

Meanwhile, in a city with a strong libertarian streak, Officer Karl F. Thompson Jr. and the Spokane Police Department came to be viewed by the public as classic protagonists. Thompson, a former Los Angeles police officer, favored an ironwood baton, and witnesses said Thompson didn’t say anything to Zehm before he raised that baton. Surveillance tape showed him repeatedly striking Zehm, who held a bottle of Pepsi. That videotape — grainy, raw footage of the encounter — also appeared to contradict official accounts of the night’s events. The Justice Department investigated, labeling the city’s response “an extensive cover-up,” and online community raged against the city’s leaders.

“Aggressive questioning by the print and television media of police and other city officials collapsed the false story that the city’s legal department had crafted,” Breean Beggs, attorney for the Zehm family, said in an email. “Once the cover-up was broken, the media relentlessly challenged the city until it finally admitted that it had been wrong … Both the process and outcome of community change would have been far different and far less positive without an engaged media in this case.”

Or an engaged online community. Armed with surveillance footage of the encounter — obtained via a public records request by journalists — the average citizen could watch the tragedy unfold from numerous angles. Zehm casually enters the store, followed moments later by Thompson, in a tragic encounter that has been debated by both experts and online viewers at home.

The surveillance footage not only launched an alternative account of the night’s events, it also provided a visual element to each emerging story. Something as banal as a legal filing could be juxtaposed with the pixelated image of Thompson striking Zehm, again and again, online and on nightly newscasts for years and years.

“I think the video was key in sustaining interest for this story,” Hatch said. “It’s rare that you have evidence showing that an incident perhaps didn’t play out the way it was initially portrayed. The continual trickling out of details also helps keep interest up.”

Release of the security video of Otto Zehm’s beating changed how the story was covered and played out.

Today, on local television and on the web, the video lives on. (Audio files could be listened to as well.)

“The Internet allowed community members to watch the Zip Trip video of Otto’s beating and death over and over again, regardless of how far removed it was from his actual death,” Beggs said.

Even with the videotape, the city’s journalists needed to find new story lines. The city, its attorneys, police officials, and federal investigators obliged. Local journalists archived a series of missteps by the police department: The city’s interim police chief withheld a public records request because he was “upset” with the newspaper’s coverage, according to a police spokesman. Detectives sought and received a search warrant for Zehm’s medical records — even though Zehm had died nine days earlier. And the city fought a request from news organizations for copies of security videos taken from the convenience store, relenting after the threat of a lawsuit.

By the time federal investigators got involved, the city’s journalists were fully engaged, tracking every angle, from the aftermath of Zehm’s death to the criminal conviction of Thompson last fall to the announcement of the Zehm family’s $1.67 million civil settlement with the city this spring. At the Spokesman-Review, new stories seemed to emerge continuously, led by veteran reporter Tom Clouse, former investigative reporter Bill Morlin, and Jonathan Brunt the paper’s city government reporter.

“Every month something else is released about the Zehm case,” a commenter wrote on the paper’s website. “What I see is corruption and cover-up at the highest level.”

At times, the story just got weird. In one of the stranger twists, The Pacific Northwest Inlander, the city’s weekly publication, reported this year that three people connected to the case experienced “incidents” at their home. One attorney for Zehm’s’ family said a water line was sliced at his house, flooding the basement; another said police entered his home without permission in 2009, after receiving a 911 hangup from the home — though no one was home at the time.

Clouse, who has been the Spokesman’s lead reporter on the Zehm case, learned his home was burglarized while he was in Yakima, Wash., covering Thompson’s trial. When Clouse returned home, he found an open copy of the newspaper by his door, displaying his front-page story on the trial, according to an article by the Inlander.

“The appearance was that someone was sending him a message,” said Jacob Fries, managing editor of The Inlander. “But (it) seems no one will ever be held accountable, so we’ll never know.”

Every narrative has its arc and ending. The conviction of Thompson would seem a natural end. Yet the story has continued.

In discussion on The Spokesman’s website, commenters saw few shades of gray. The Zehm case was either an example of police abuse of a vulnerable man, or clear evidence that the press had hastily tried and judged a police officer. Commenters railed against the city’s police department. On Facebook, several Spokane police officers changed their photos to Thompson’s badge number, sparking more outrage online.

“This is a good day,” longtime commenter Ed Byrnes wrote, “for justice and the people of Spokane.”

Others were less enthusiastic. At spokesman.com, commenter Shadedmuse said, “May the jury burn in hell with Ottoa (sic) the crazed maniacfor ruining a man life and career.”

Readers have encouraged the paper to enter its work for a Pulitzer Prize, but measuring a year’s worth of work is inadequate in the Zehm story. To understand the commitment of the media — and the online community — to the story, one must follow a story that has unfolded for more than 70 months.

“In a way, until the public confidence is truly restored in the police department — via a strip-down by the Justice Department, a strong ombudsman or something else — the Zehm saga goes on,” Fries said.

Benjamin Shors teaches journalism at the Edward R. Murrow College of Communication at Washington State University. He contributed a small number of stories to the Zehm investigation in 2006.