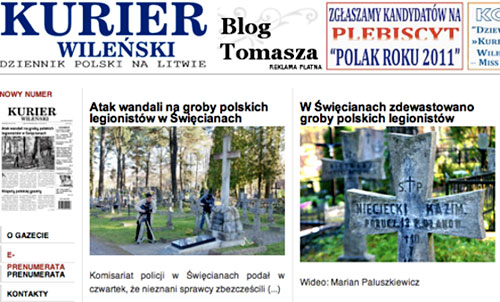 Kurier Wilenski is the newspaper of the Polish community in Lithuania.

What do you do when a longtime friend invites you to come over for a chat? Surely, you perk up and hurry to meet your buddy.

But in mid-April, when Polish President Bronislaw Komorowski personally invited Lithuanian President Dalia Grybauskaite to join him in a meeting with the other two leaders of the Baltic States, Andris Berzins of Latvia and Toomas Hendrik Ilves of Estonia, Grybauskaite snubbed the courteous offer, arguing that she had already discussed Baltic issues and the agenda of the upcoming NATO summit with him.

This is the ultimate price we are paying for the firm stance we take on Polish issues in Lithuania. In other words, it is a state-ordered persecution." -Robert Mickiewicz, editor of Kurier Wilenski

Did the media play a role in the presidential refusal?

Very likely so. The relationship between Lithuania and Poland is already strained over an amended law in Lithuania which enforces the use of the Lithuanian language, even in Polish schools. Relations have soured even more lately as media on both sides exchange jabs and take threatening lunges.

The question of loyalty

Kurier Wilenski, the newspaper of the Polish community in Lithuania, has gone to extremes, striking nationalistic chords and publishing insulting remarks against Lithuanians.

“Lithuania’s ethnic policies are all about the assimilation of the Poles, stripping them of their language, history and cultural heritage,” reads a recent article in the paper, which is traditionally known for its vociferous stance against Lithuania.

It is estimated that the Polish community in Lithuania represents nearly 7 percent of the Lithuanian population.

The newspaper’s position even triggered a broader discussion on the “loyalty” that can be expected from a minority publication.

“If you go to Germany or the United Kingdom, you won’t find any local Polish, Lithuanian, Romanian or Bulgarian minorities’ newspapers instigating readers against their host country,” said Martynas Vilkiunas, a freelance journalist and political analyst.

Robert Mickiewicz, the editor of Kurier Wilenski, retorted: “Do our critics expect us to drum according to their tunes or the melody of the state? Isn’t Lithuania a free country with a free press?”

“We are simply reflecting the concerns and burdens of the Polish minority in Lithuania,” he added.

He Who Pays the Piper Calls the Tune

Already back in 2007, the Polish newspaper instigated Lithuanian animosity when it published an article by Krysztof Buchowski titled “Poles’ views on Lithuanians between the world wars.” The Lithuanian Journalism Ethics Ombudsman ruled in 2008 that Kurier Wilenski had violated journalism ethics and breached the law.

The immediate financial fallout was severe for the Polish publication: According to the rules, the paper was not eligible in 2008 for funding from the Lithuanian Media, Radio and TV Fund (LMRTF), a state organization in charge of distributing money for educational programs to newspapers, radio and TV stations.

As it turned out, the ethical violation had far-reaching consequences for Kurier Wilenski, since its quest for funding continued to be declined in the following years, including in 2012.

“This is the ultimate price we are paying for the firm stance we take on Polish issues in Lithuania. In other words, it is a state-ordered persecution,” Mickiewicz said.

For many small newspapers such as Kurier Wilenski, LMRTF funding is a matter of life or death.

Depending on a newspaper’s subscription and circulation figures, funding allocations can range from a mere several thousand litas to substantial five-digit payouts.

This year, the LMRTF shared 6.2 million Lithuanian Lita ($2.2 million) with over 100 media outlets, but no Polish publication or radio stationi in Lithuania received any funding.

“Obviously, we are being ignored because of political reasons. Basically, the Fund is saying: Beware that he who pays the piper calls the tune. Certainly, we don’t fit in those state-ordered tunes,” Mickiewicz said.

Last year, the Polish newspaper filed a complaint at the European Court of Human Rights, urging it to overturn the Lithuanian court decision which chose to uphold the adverse ruling of the Lithuanian Journalism Ethics Ombudsman.

The Strasbourg Court has not announced its verdict yet.

Who Should Fund Minority Media Outlets?

The topic of the refusal of funding is awkwardly surfacing even on the political stage, and LMRTH heads are in defense mode.

“The speculations of the editor of Kurier Wilenski that the newspaper isn’t receiving funding because of political reasons are absolutely unfounded,” said LMRTH director Mykolas Karciauskas. “The experts we hire to evaluate the projects submitted for funding say that they notice the same thing every year: Kurier Wilenski’s projects don’t meet the required standards in terms of preparation, thematic depth and outreach. That is the reason why the newspaper’s projects are turned down.”

Mickiewicz fired back: “Lithuania’s claims that it takes good care of its ethnic minorities go against the facts. On the contrary, when it comes to supporting ethnic minorities’ media, Poland has been much more supportive.”

He noted that Poland, unlike Lithuania, allocates funding to minorities’ media outlets not through a state fund and its “biased” experts, but directly through the Ministry of Foreign Affairs.

“The bottom line is that whoever applies for funding, gets it. Lithuanian language newspaper publishers in Suwalki — harboring a large Lithuanian community — are well aware of this as they rake in Polish state money every year. Nothing like the LMRTH lottery in Lithuania and the political game surrounding budget money distribution,” the Polish editor stressed.

Petras Maksimavicius, the chairman of the board of Lietuvos namai (Lithuanian Home) that publishes Ausra (Dawn), the biggest publication of the Lithuanian minority in Poland, agreed that the uinterrupted annual financial assistance of the Polish government is “crucial” for his newspaper.

“Besides, we receive funding from the LMRTH too,” the chairman added.

Refusing to elaborate on the two states’ differing approach to local minorities’ media organizations, he nevertheless acknowledged “the political factor.” “Ethnic minorities’ newspapers both in Poland and Lithuania have long gone beyond being keepers of ethnic heritage as they have become very important political tools,” he said. He also noted that “Kurier Wilenski goes to extremes.”

Dainius Radzevicius, the chairman of the Lithuanian Journalists Union, doesn’t approve the allocation of state money through a government-established fund to minority newspapers. In his opinion, it’s hard to avoid raising the suspicion that governments want something back for their money — loyalty.

“Newspapers have to stand firm on their feet, regardless of their subscription, sale and advertising money. This is the bottom line,” Radzevicius said.

To alleviate Kurier Wilenski’s heavy financial burdens, the Polish Ministry of Foreign Affairs agreed to grant it 30,000 euros at the end of 2011.

Thanks to the money, the newspaper has hiked up its production — from three to five times a week — and ramped up the fringe rhetoric.

Linas Jegelevicius, 40, Lithuanian, obtained his master’s degree in journalism at the Vilnius University Institute of Journalism. Between 1994 and 2004, he lived in New York and Miami, where he contributed to the Miami newspaper Wire. From 2001 until 2003, he edited and published his own newspaper, South Beach AXIS. Jegelevicius currently works as an editor for the regional newspaper Palangos tiltas, in the resort town of Palanga in the west of Lithuania. He also contributes as a freelance journalist to several English language publications, including The Baltic Times and Ooskanews.com. He has published two books, and his interests include politics, economics, journalism, literature, the English language (particularly urban English), psychology, traveling and human rights.