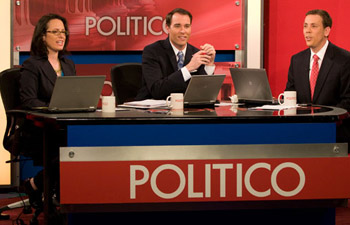 As I’ve read up online about the 2012 campaign news in recent months, I’ve noticed I’m doing a lot less, well, reading. I’ve checked around a bit and confirmed that websites that traditionally focus on text-based journalism — like Politico.com and NYTimes.com — are indeed ramping up their video offerings to add a new dimension to their campaign coverage.

The New Yorker’s Ryan Lizza recently profiled “Politico Live,” a live election-night show that’s being produced by the 5-year-old website, and which was broadcast by C-SPAN nationally during some recent GOP primary contests. Also, Ann Derry, the editorial director for video at the New York Times, discussed with me in an e-mail this week’s launch of the Times’ twice-weekly live politics edition of its TimesCast video news program. Derry noted, “We will be covering the conventions in live video, as well as the debates and election night. And we will produce video reports from the field and regular video enterprise reporting throughout the election season.”

How long will it be before Politico begins competing with CNN and Huffington Post takes market share from MSNBC?"

So in the future, newshounds will have ever more choices for watching political debates and election night results than simply the network or cable news outlets.

All this leaves me wondering: Is this the beginning of a longer and broader trend? Will online journalism begin to take on more qualities of television than of print? How long will it be before Politico begins competing with CNN and Huffington Post takes market share from MSNBC? Or am I dramatically over-thinking this? (Side note: The irony isn’t lost on me that I’m commenting textually for PBS, which most people regard as a television outlet.)

From a Textual Web to a Televisual Web?

Long before MSNBC unveiled its “Lean Forward” slogan, the Internet was touted as a “lean forward medium” that, unlike the television, prompted the user to sit attentively as she read articles, clicked through to links, and commented on blog entries. In short, surfing the web was active while watching television was passive. The conventional wisdom suggested that people wouldn’t have the patience to watch online video longer than three minutes or so.

As media continue to converge, that assumption is being abandoned. User behavior trends have changed and, with many people able to stream their favorite television shows on their desktop monitors, the personal computer is essentially doubling as another television.

The Internet may prove to be the petri dish where the lines between visual and verbal dissolve. As web users begin to treat the Internet as a variously “lean forward” and “lean back” medium, news outlets will be able to transcend the medium on which they traditionally appear. We’ve already seen this promiscuity play out in the other direction, as television channels such as Fox News, MSNBC and CNN all expand their text-based online content. While CNN is confronting the lowest ratings among the three, it launched an ad campaign boasting its large “on-air & online” audience and claiming “the largest integrated audience in media.”

If, ultimately, TV channels hope to compete with print reporting online or text-based outlets hope to compete with TV channels over web video, that future may be distant. As Lizza’s reporting reveals, Mike Allen and Jim VandeHei over at Politico Live are really just producing “hours of unfiltered banter by Politico’s motley writers who revel in how untelegenic they are.” It’s basically a humble reality show for political junkies that emphasizes the news-about-the-news over the actual news. And, as Derry at the New York Times pointed out to me, the Times essentially transitioned its documentary television unit into the newsroom department that produces the NYTimes.com videos. This may be why the Times videos still have as much a documentary feel to them as a newsy feel.

As web video continues to surge among traditional and newer news outlets alike, one wonders whether, in the future, textual content will take a backseat to televisual content. With cheapening bandwidth and constantly improving streaming technology, the technological barriers for this shift would be fairly low. And with text-based news organizations ramping up their capabilities on this front, there will be a steady supply of video. And video ads are booming as well, with eMarketer predicting that online video ads will make up 15% of all online ad revenues by 2016, up from 7.9% this year.

It will come down to whether the demand for print journalism remains strong. As Derry suggested to me, “A story can be told primarily in video: Great characters, strong visuals, lively action can be captured in moving pictures in a way that text can’t hope to duplicate.” This is certainly true, and I’m looking forward to seeing how the Times video programming evolves.