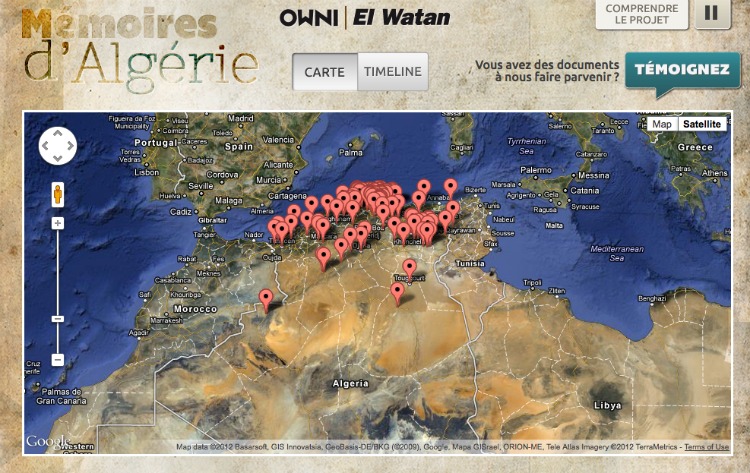 When it comes to the French-Algerian war, which eventually led to Algeria gaining its independence from France, and arguably caused the collapse of the French Fourth Republic, there’s the official story and there’s what really happened.

The idea was to tell another story to the official story that's approved by the French and Algerian states, to tell the story of this war and this particular time period in Algeria from the point of view of those who lived it." -Julien Goetz

So on the 50th anniversary of the end of the war (the war took place between 1954 and 1962) on March 19, French news site OWNI (of which, I am the editor) and Algerian newspaper El Watan launched a collaborative application, Memories of Algeria (Mémoires d’Algérie), which offers people an opportunity to explore the history of the war themselves.

The application offers users the chance to browse thousands of official military archives and personal accounts related to the war.

Via a timeline or a map, the user can discover the minutes of a meeting between French ministers and military leaders, the personal family history of an Algerian militant, or personal photographs taken during the period. As you browse, an audio track of actors reading from the accounts plays. The documents are all in French, the common language of the war.

Sidi Mammar Meziane joined the underground in 1956 at Akfadou, and ran arms from Morocco. He was killed in battle in 1960, in the mountains of Djurdjura. Photo courtesy of OWNI.

“In Algeria, the official story dominates and overwhelms the rare work of historians that exists,” said Mélanie Matarese, an editor at El Watan who worked closely on the project from Algiers. El Watan began collecting personal accounts of the war from Algerians in January 2011. “We thought that devoting a public space to personal accounts would make for an interesting alternative. We set up a forum where hundreds of stories, photos and documents were sent.”

In Paris, journalists at OWNI had scanned and photographed the French military records of the war, officially only accessible to students and researchers. Following a meeting in Algiers, the idea was born to combine the two resources.

“We wanted to cross-reference the two, using keywords, locations and dates,” explained Pierre Alonso, a journalist at OWNI. “The aim was to create a sort of ‘digital museum’ that could be expanded and enriched over time.”

“The idea was to tell another story to the official story that’s approved by the French and Algerian states,” explained Julien Goetz, head data journalist on the project, “to tell the story of this war and this particular time period in Algeria from the point of view of those who lived it.”

“There’s been a lot of denial, especially amongst generations older than us,” Alonso said. “Until 1999 in France the official name of the war was the ‘Algerian Events.’ At school I studied the war as a war, but Julien [Goetz], who is a few years older than me, didn’t for example.”

“It’s not really discussed,” Goetz said. “And it’s the same in Algeria.”

Officially, the French military records were only accessible to researchers and students. OWNI chose to ignore the ban and publish the records, risking the wrath of the state. In the end, common sense — and France’s strong public interest laws — prevailed.

The intention to make the project as objective as possible was made a priority from the start.

“We wanted to avoid imposing a filter, a translation, a reading,” Matarese said. “We have no pretensions to be writing history — just to create a database with documents from different backgrounds, that everyone can appropriate as they see fit.”

Beyond the enormous task of reading, scanning and tagging some 7,000 individual documents, the sensitive nature of the information provided an editorial challenge. For instance, some of the documents include reports of confessions gained by torture.

“Initially we didn’t want to delete any names and to publish everything,” Alonso said. “But we discussed the issue with the historians working with us on the project, who advised against it. In those instances we redacted the name of the person who was tortured.”

“It would be difficult for somebody’s family to read that their father or grandfather was tortured, or that he gave information that might have led to other people being killed,” Goetz said. “It’s complicated. The goal was not to facilitate people researching who was responsible for what, or who was to blame. The app is intended to serve as a memorial. It’s not about blame.”

The project was a unique collaboration between Algiers and Paris, involving a team of 17 journalists, developers, historians, data journalists, and a designer, working together from day one.

Ali Hassani was expelled from Algeria in 1947 for shooting a man in his village. He moved to France and worked as a foreman. In 1949, he moved to Paris and began to campaign for the independence of Algeria, fundraising for the FLN. Photo courtesy of OWNI.

“It’s a process of back and forth,” Goetz said, “lots of discussions, trying to find compromises between development and design and journalism, with the goal of making the site as comprehensible as possible for the user.”

“We’re talking about a website that shares hundreds or thousands of largely military documents,” said James Lafa, who worked on the development side of Mémoires. “It’s not necessarily the type of media that people are going to want to be reading through on a computer.”

“The application had to stand out and be attractive to make people want to dig into the documents and maybe add their own, but also be understated,” explained Marion Boucharlat, lead designer on the project. “The information shouldn’t be disturbed by too many colors and graphics. So we developed a design inspired by antique maps and antiquated materials, reflecting some of the photos from the time. We wanted users to feel as though they were immersing themselves in an era.”

“To allow users to search through thousands of documents via dozens of different criteria, and get a result within milliseconds, it wasn’t possible to work with the tools that we were used to using,” Lafa said. “I made the choice to go with technology that I didn’t know at all but which I’d read a lot of good things about: Node.js and MongoDB. With this we created an API that responds in 10 milliseconds — far beyond my hopes!”

So far it seems as though the risks taken with both the material and technology have been worth it. The site is clocking up to 2,000 visitors a day who are staying for an average of seven minutes. “They’re staying and reading through the documents,” Lafa said. “It works.”

Reaction, on both sides of the Mediterranean, has been positive.

“Many users sent us new documents within the first few hours of the site going live,” Matarese said.

“We didn’t know how former soldiers and survivors would react,” Alonso said. “Particularly for les pieds-noirs (French citizens who lived in Algeria before its independence) and les harkis (Algerians who supported the French regime during the war), this issue can be very sensitive for them. We were nervous about that.”

The most pleasing statistic of all has been the divide between the origin of visitors. “Exactly 40% from France and 40% from Algeria, with the rest from around the world,” Goetz said.

A second version, launching on July 5 — the 50th anniversary of Algerian independence — will allow users to tag themselves in documents, and add their own notes.

The painstaking tagging of each individual document also means that others can now use the database as a starting point for their own research. Meanwhile, survivors of the war continue to add their stories. “Users are depositing new documents every day,” Matarese said. “On July 5, we’ll have greatly increased the content that’s online.”

Anyone with technical skills is also welcome to suggest improvements to the site’s hardware. “The project is open source so anyone can contribute to its development,” Lafa said.

Aidan Mac Guill is the editor of OWNI.eu, OWNI’s English language sister website. He has written for The New York Times, the International Herald Tribune and Wired, amongst others. You can follow him on Twitter @aidanmacguill. You can also follow the Memories of Algeria project on Facebook.