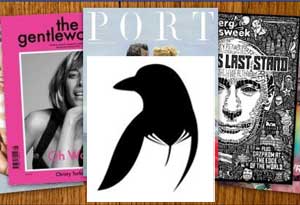 "Magpile":http://magpile.com/, a new social site for magazine lovers, offers enthusiastic readers a place to share their favorite magazines and discuss them online.

Reading a print magazine doesn’t have to be a lonely experience anymore.

Magpile, a new social site for magazine lovers, offers enthusiastic readers a place to share their favorite magazines and discuss them online. Founder and print magazine fan Dan Rowden, a web developer, noticed that although a number of websites let readers rate and discuss books, magazine fans were lost in cyberspace.

I want Magpile to be like the magazine database, or like a portal, for people to go to if they want to find out about a certain topic or to find magazines on a topic." -founder Dan Rowden

Magpile lets users view a variety of international magazine covers, add more magazines and individual issues to the database, track issues they own in a personal “pile,” and save issues they would like to buy someday on a wishlist.

Rowden currently lives in Saudi Arabia, which inspired some of these features. While he also reads magazines from outside the country on his iPad, his true love is print magazines, in spite of obstacles to getting them.

“The post here is quite slow. For example, I’m a Monocle subscriber. Issues normally turn up just as the next one is coming out,” Rowden said. “When I come back to Europe, I bring a stack of magazines back with me, but otherwise I have to rely on family and friends to get them.”

Rowden found his growing print collection difficult to track, and realized other print magazine devotees probably had the same problem. He coded Magpile in just a few months as a side project and launched it in March 2012. Since then, he’s received a steady stream of invite requests, and users have added over 1,000 magazine issues to the site. Magazines and issues can be edited wiki-style by users. Most of the magazines added so far are British and European titles. Monocle is currently the most popular magazine in users’ “piles,” or personal magazine collections.

Rowden would like for the site eventually to include “every magazine ever.”

Magpile lets users track which issues of a magazine they own — in their ‘pile’ — and which they still need to complete their collections.

“I want Magpile to be like the magazine database, or like a portal, for people to go to if they want to find out about a certain topic or to find magazines on a topic,” he said.

In addition to managing their personal collections, Magpile users can follow each other’s activity on the site. Users can comment on specific issues and discuss them with each other. Rowden plans to add the capability to comment on entire magazines, and hopes interaction will pick up as more magazine fans join the site.

“I don’t know that there’s another place online where people can yak about magazines, but I think people who are into magazines are quite passionate,” he said.

Rowden sees Goodreads, the successful, book-focused social site with more than 8.5 million members, as a potential model for Magpile.

Rowden doesn’t have professional experience in the magazine industry, though he’d like to work in it eventually. Instead, his drive to create Magpile comes entirely from his enjoyment of magazines.

“It’s something I enjoy doing in my spare time. Combining magazines and web design is quite fun,” he said. He’s now developing a variety of ways Magpile can make money.

Some sponsors have already signed on with Magpile, such as Stack Magazines and the magazine Offscreen. “I tried to pinpoint some smaller magazines and some online shops, to give users useful ads,” Rowden said.

Because Magpile helps users build their print magazine collections, a future option might be to link issues of magazines directly to publishers’ back issue ordering systems, then collecting a referral fee from sales.

One of Magpile’s own ads.

“There’s a few different ways of monetizing the site,” Rowden said. “As the site’s so young, there’s a lot of development that still needs to happen first.”

In the meantime, Magpile’s user base is growing through social media — Twitter, Facebook and Pinterest. Rowden doesn’t have an official Magpile blog, so he’s used Twitter and Facebook for updates on Magpile’s launch and new features. He also used Twitter to distribute a special round of 50 invites announced through the MagCulture blog. Bloggers’ posts about Magpile have generally been the most consistent source of new invite requests, Rowden said.

While it has the sleek design and features of a cutting-edge, niche social network, Magpile is at heart a celebration of the print magazine. By offering users the chance to inventory and talk about their print magazine collections, Magpile unites new and old media in a surprising way. The name “Magpile” and the use of “piles” as the term for users’ personal inventories evoke images of print magazines.

“I don’t want Magpile to become somewhere that digital is ‘the thing,’ because I think print is really important,” Rowden said. “Personally, I prefer print. I want to push the print issues as much as possible. It’s more about the social impact of magazines.”

Magazines with time-sensitive content and less artistic presentation might better serve themselves and their readers today by moving to digital platforms. However, it feels like there’s also growing momentum behind a movement to create and support publications with greater print sophistication.

These magazines delight print enthusiasts who, like Rowden, appreciate the medium’s potential for “social impact.” Magpile might be ahead of the curve in providing an online gathering place for celebrating the best that print magazines continue to offer.