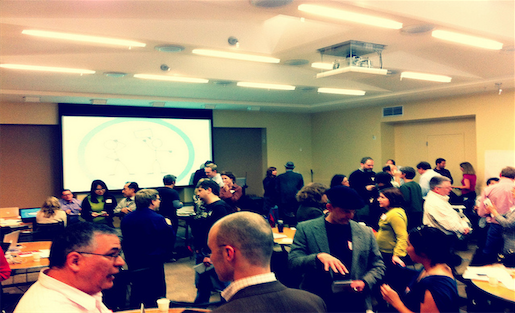 Attendees at Collab/Space 2012 at the David Brower Center in Berkeley. Photo courtesy of Don Loeb (@donlbe) via Flickr

As the recent Collab/Space 2012 event made clear, the longevity of individual news outlets increasingly relies on a willingness and ability to collaborate.

Journalists, technologists and other media makers from a range of news, public media and non-profit organizations came together from across the country for the daylong event, which was hosted by the University of California at Berkeley’s Investigative Reporting Program (IRP) and PBS MediaShift.

The benefits of collaboration -- from gaining additional resources to cover a story, to reaching a wider audience -- have come to outweigh individual egos."

“It’s not about us,” PBS MediaShift Executive Editor Mark Glaser said. “It’s about the people. It should be about how we can do it together to serve people in a better way.”

Glaser described a culture of “I” in journalism: I want to get the story. I want the award. Collab/Space 2012, he said, was designed to help shift the journalism community’s thinking beyond “I” and back toward what brought people into this profession to begin with.

Before the age of the Internet, collaboration was a terminable offense, observed the IRP’s Lowell Bergman. But the benefits of collaboration — from gaining additional resources to cover a story, to reaching a wider audience — have come to outweigh individual egos, something that was evident as attendees openly discussed challenges and solutions over the course of the day.

Speaker after speaker reiterated that as financial resources continue to evaporate and social media enables more and more people to be content producers, the industry is going to have to adapt or die.

“If journalism institutions are shrinking and anyone with a smartphone is a journalist and deep investigative stories are being replaced by web hits, maybe it’s time to start thinking outside the organization,” Investigative News Network Executive Editor Evelyn Larubia said.

“When change comes, who survives?” asked Ulrich Nettesheim, an organizational psychologist at Berkeley’s Haas School of Business, who ran an interactive exercise with the group. “The ones ready, willing and able to adapt.”

The first half of the day was dedicated to introducing companies that can help facilitate the collaboration process.

Wendy Levy grabbed the crowd’s attention when she introduced Sparkwise, a cloud-based platform that transforms raw metrics into easily digested and compelling stories using video, audio and text. Although Sparkwise wasn’t explicitly created for journalists, Levy argued that in order to collaborate it will be necessary for the industry to find expedient and intelligent ways to publish data in a place where it can be aggregated with information from similar organizations. The largest obstacle, she said, is getting reporters to be willing to share their data.

Storify co-founder Burt Herman described how Storify allows journalists to curate social media, thus collaborating with users to tell a story. “Everybody is a reporter. Not everybody is a journalist,” he said, emphasizing the value of the journalist’s curatorial role. Read Herman’s Storify coverage of Collab/Space here.

Another platform that enables real-time collaborative storytelling is ScribbleLive, which MediaShift used to provide live coverage of the day’s events, including tweets, photos and videos. GitHub, which creates tools for open-source code development, was also present. GitHub has grown into the largest code host in the world and makes it easier to collaborate and share code.

While attendees spent a good amount of time talking tools and strategies for managing collaboration, the overarching theme of the conference was relationships, which are at the core of any team effort. A few truths emerged: All players in a collaboration must trust each other, be willing to show their hand, and have faith in the common goal.

Some even wondered if relationship management should become part of journalists’ core training. “Should a class on managing relationships be taught at journalism schools?” asked Meghann Farnsworth, distribution and online community manager at the Center for Investigative Reporting and California Watch, via Twitter — to which Andrew Haeg, Public Insight Network co-founder, responded, “Yes”:

Do you agree? And if you were at Collab/Space, what did you think of the event? Any highlights I missed? If you weren’t there, are there any questions about the day’s discussion that I or one of the other attendees or speakers can answer for you?

Meghan Walsh considers herself a print journalist but is always looking for creative ways to tell a story. She covered sports and breaking news for the Arizona Republic and then government and crime for The World newspaper before becoming associate editor of InWithSkin, a lifestyle and beauty magazine. As a graduate journalism student at UC Berkeley, she has learned to incorporate photography, video and multimedia into her storytelling. Meghan also works for the Investigate Reporting Program.