Collaboration, Competition and Consolidation: Where Is the Line? 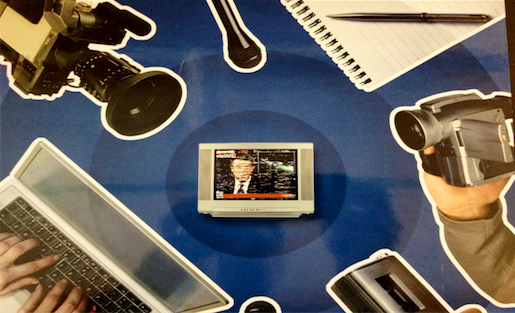 As this site explores the promises and pitfalls of collaborative journalism, I’m particularly interested in the invisible and often porous boundary between collaboration and consolidation.

Many of the same technological changes and economic pressures that have driven the development of collaborative journalism are also driving media consolidation; in both cases, proponents argue that benefits include reducing overhead costs and pooling resources to provide quality journalism to the community.

Finding a yardstick to assess the impact of journalism partnerships on local communities is essential if we are to encourage more partnerships that serve the public good.

But collaboration and consolidation are very different animals. The distinctions between the two were highlighted in testimony at a future of journalism workshop held by the Federal Trade Commission in 2009. Vivian Schiller, then CEO of NPR, argued to the Commission, “What we need are deep partnerships — not mergers. There must be independent newsrooms.”

Barbara Wall, a vice president at Gannett Newspapers, shrugged off the suggestion: “You all call it partnering; we call it mergers or acquisitions or other things along those lines.”

The quotes from Schiller and Wall highlight a key distinction between collaborations and consolidation. A collaboration is a partnership among separate and independent entities that work together to produce more and better journalism, while consolidation results in one news organization co-opting another. Evidence shows that independent newsrooms decrease the concentration of power, increase the number of diverse voices in the public sphere, and act in the public interest. Consolidation, on the other hand, inhibits competition, harms diversity, and runs counter to the value of localism.

Ohio’s media ecosystem offers a dramatic snapshot of how collaboration can benefit a local news ecosystem, while consolidation can harm it. Recently the Toledo Blade broke the news that a so-called collaboration between two local television stations would result in 63 journalists and station staff losing their jobs. According to the details of a shared services agreement, the stations will share content, personnel and equipment. There are already four other such agreements in place between local television stations in Ohio, and more than 100 similar agreements nationwide; in addition, eight of Ohio’s major newspapers share content through the Ohio Newspaper Organization.

In filings at the Federal Communications Commission, broadcasters have claimed that shared services agreements like those in Ohio actually increase the amount of local news reporting. In practice, however, these deals often result in the same newscast being broadcast on multiple stations. These duplicative newscasts do nothing to expand the range of stories, voices or viewpoints in local media.

On the other hand, Ohio is also home to Ideastream, a 10-year-old collaborative organization that connects public TV and radio stations with a range of other public access and educational media organizations working together to build a digital public square for local communities. Rather than consolidating staff and diminishing the diversity of voices and viewpoints available, this partnership has augmented and expanded the services each distinct organization offers to the local community. The Carnegie Foundation called Ideastream “a digital community center or a virtual YMCA, seeking to draw together the resources of ‘heritage institutions’ (museums, theaters, colleges, libraries, medical centers, government agencies, etc.) and make them digitally available on demand to patrons, clients and students.“

Whereas consolidation, especially in broadcast and newspaper chains, often reinforces silos, Barbara Cochran notes that Ideastream has “broken down the silos between platforms and embraced interactivity,” reinventing its mission “not as broadcasting but as community service.” Ideastream is motivated by a need to combine resources and leverage shared opportunities, but it is inspired by a public mission that guides its work.

Measuring the Value of Journalism Partnerships

In recent years, much has been written about the fact that journalism is a public good. The Knight Commission’s Informing Communities report asserts, “Information is as vital to the healthy functioning of communities as clean air, safe streets, good schools and public health.” If we agree with this notion, how can we use “the public good” as a gauge to measure and assess journalism partnerships?

It’s not easy. But finding a yardstick to assess the impact of journalism partnerships on local communities is essential if we are to encourage more partnerships that serve the public good.

In its report, the Knight Commission settled on five democratic values that news providers should promote:

Could we apply this same set of principles to assess the impact of journalism collaborations on the overall news ecosystem of a given community (one defined by interest or geography)? Could we use these principles to help us identify when collaborations are contributing to a more robust news environment? Could we assess if a given partnership increases openness, inclusion, participation and empowerment — and fosters a common pursuit of truth? What other factors might we weigh?

I don’t have the answers. The lines are blurry, and that is at least in part a good thing, indicating the range of experiments happening across the news and journalism landscape. Jason Fry, writing about sports reporting, has argued that journalism “is no longer marked by clear divisions or bright lines. It’s become a spectrum.” The same is true of collaboration. But we shouldn’t wait until the dust settles to begin asking these questions and evaluating the impact of all these changes. Indeed, our communities can’t wait.

Matt Schafer contributed additional reporting and research to this post.