Collaborating for Dollars: How to Raise Revenue With Others 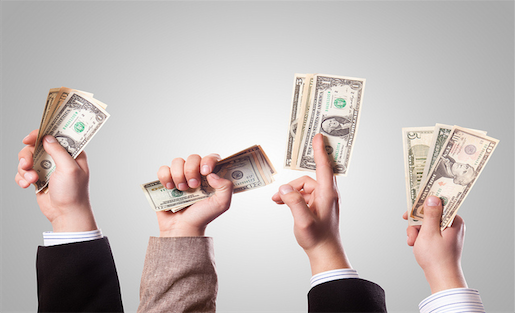 At the recent Collab/Space 2012 event, more hands shot up when Journalism Accelerator’s Emily Harris asked who was interested in generating revenue than for any other question. Clearly, there’s big interest in collaborating to earn money.

Here, then, are some pointers on collaborating to earn revenue and otherwise improve business performance.

Your chances of earning more revenue grow if more people are collaborating to help make a project a success."

The common model in the media business used to be that one party would pay another a flat fee for a specified service or product. A publisher, for example, paid a vendor for printing or distribution. A freelancer got a check for a specified amount, agreed upon in advance.

These days, however, it’s increasingly common for two parties in a media deal to share revenue as it grows, rather than for one to fork over a single lump sum — an approach that aligns interests and keeps both sides working toward the same goal.

Content creators for platforms like YouTube, BlogTV and Yahoo Voices can earn more revenue as what they produce gets more traffic. Vendors like AdSense and ad networks collect a share of revenue as it’s earned, rather than simply charging a fee upfront for their technology.

Sure, if you’re a content creator, it can be hard to let go of the impulse to keep all the money your efforts earn — after all, the more participants there are, the more revenue has to be generated to support them. But your chances of earning more revenue grow if more people are collaborating to help make a project a success.

The more people or organizations there are collaborating on a media effort, the more promotional and distribution outlets become available, from websites to social networks, broadcast outlets, emails, mobile platforms, word of mouth, and so on.

A New York Times executive recently told me that the paper’s collaboration with WNYC on SchoolBook generates a lot more awareness of the education website because of the radio station’s reach. (Read our previous coverage of SchoolBook.)

Such active linking and sharing can, in turn, increase a product’s search engine visibility, thus generating more traffic over time. And every additional pageview that carries revenue opportunities such as ads equals more money over time.

For non-profits, increased traffic can lead to increased funding.

“Collaborations could lead to … more recognition, more distribution and more impact for stories,” MediaShift’s Mark Glaser, who co-hosted Collab/Space with UC Berkeley’s Investigative Reporting Program (Berkeley IRP), wrote on a discussion thread started by Harris on the Journalism Accelerator website. “That could lead to more donations, memberships and foundation interest for funding.”

At Collab/Space, co-host Lowell Bergman of Berkeley IRP pointed out that a Frontline collaboration with another news organization generated twice the viewership of a typical episode of the investigative documentary series.

In today’s resource-starved news business, with reporters being laid off and fact-checking and copy desks eviscerated, it’s increasingly difficult for any individual news organization to have the person-hours needed to carefully report a story and get it right.

Collaborating creates efficiencies by enabling partners to report and produce different parts of the same story. Rather than having multiple partners send a reporter or camera operator to a news conference, the partnership can send one coverage team, and other staff can focus on complementary work. People who are good at writing can write; those who specialize in video production can focus on that; and so forth. Organizations can share resources on the business side, too.

“Do we all want to be islands, or do we want to collaborate, share things like back-office operations?” asked Evelyn Larrubia of the Investigative News Network collaborative, which helps its dozens of members share “back-end” resources such as billing and accounting. “The problem we’re solving is not a content problem. It’s a resource problem and a depth problem.”

Change the Mentality and Learn “Coopetition”

Journalists needed to learn, as technologists in Silicon Valley have, that sometimes, cooperation with competitors is the best thing for your business, Glaser said. Facebook, Google, Twitter, Foursquare and many other media and technology companies share some level of information and code with competitors, knowing they’ll be stronger for having done so.

As The Huffington Post, Business Insider, and Gawker have shown, others will share your material and build a business on it with or without your active participation; in that case, it’s better to form proactive partnerships for mutual benefit.

Many news organizations and some journalists still tend to be proprietary about their efforts. But in a linked economy, why invest resources in “matching” a story that’s just a click away?

“We have to have this kind of cultural shift,” Glaser said. “There’s a kind of ownership of the story that … becomes about us. ‘I want this scoop, I want the award.’ What we have lost along the way is it’s not about us, it’s about serving people — uncovering things that are important.”

Oakland Local’s Susan Mernit talked at Collab/Space about a for-profit news organization that “doesn’t link out” and refused to help fund her organization’s efforts to contribute to their site for fear her not-for-profit group would eventually overtake them. Both, actually, could have benefited and earned more revenue from the content.

Collaboration can take advantage of the network effect, the concept that the more nodes there are in a network, the more value there is to the network and to each of those nodes — even when the nodes are competitors.

One apt illustration is “private label” ad networks that allow similar, sometimes competitive websites to aggregate their page views and communities through platforms such as Addiply, BSA Private Label and AdKiwi and increase each site’s ability to appeal to advertisers they’d have more trouble reaching on their own.

In one example, a group of local websites that reach different neighborhoods around Chicago are banding together and increasing their ability to sell throughout the region with one sales staff.

Large media companies such as NBC Universal and Cox media have formed their own private label networks to group sites by subject, such as health, sports and food. Collaborating in this way can lead to more revenue for all.

Imagine if CBS News had collaborated with computer experts to vet documents allegedly showing George W. Bush shirked his duties in the National Guard, or if Jason Blair had collaborators on his false stories published in Times. In each case, the news organization could have saved huge embarrassment and cost, and even kept the focus on the issues in the stories rather than the mistakes.

Also, the more contributors and organizations there are behind a story, the less easy it is for someone offended by it to take legal action. As Bergman noted, “If you can spread the liability on a story,” you can make those who might sue think a little more before they do.

By its nature, business is a collaborative venture. All sides must derive value for a deal to succeed, and that’s never been truer than in today’s media business. Journalists who’ve grown up in a lone wolf, competitive culture would do well to emulate the lessons of their brethren in other domains.

> Live Coverage of the Collab/Space 2012 Event by Ashwin Seshagiri