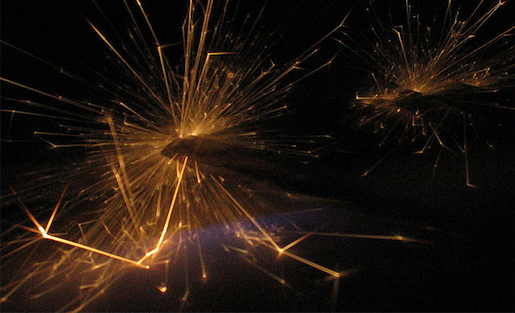 The shift from competition to collaboration in the American newsroom has been so profound that in 2009 the Columbia Journalism Review published an article on “Journalism’s collaborative future,” arguing that “there is something fundamental under way.” That same year, Guardian Editor Alan Rusbridger wrote, “I’ve seen the future, and it’s mutual.” The trend is clear, and by all accounts collaborations are expanding and maturing, but do we have a clear enough understanding of what motivates these collaborative efforts? What are the factors inside and outside the newsroom that are inspiring this great collaborative shift?

The past few years have created a perfect storm of economic crisis, technological transition, and cultural change that have combined to help inspire many journalists to explore news partnerships."

There is a professional transition in the field from an environment where competition was the dominant mode of interacting with other organizations to an era where dividing labor and sharing might serve the public better.

The past few years have created a perfect storm of economic crisis, technological transition, and cultural change that have combined to help inspire many journalists to explore news partnerships. Below, I explore three factors that are motivating journalists to work together.

Journalism practice has always been tied to technological development. In their book, “Four Theories of the Press,” Fred Siebert, Theodore Peterson and Wilbur Schramm argue, “The press always takes on the form and coloration of the social and political structures within which it operates.” Historically, we’ve seen this as the telegraph led to the development of the inverted pyramid, the telephone begat the phone interview, and the always-on cable news channels resulted in the 24-hour news cycle.

One thing that differentiates the current batch of technological changes and their impact on journalism is the profound pace of that change. Now, the Internet, mobile devices and new digital tools are prompting the profession of journalism to become more collaborative, by fostering interaction with the public and with other news organizations.

Platforms like Publish2, a content-management system; Stroome, a browser-based video editing platform; and DocumentCloud, a repository for primary documents — among many others — are helping to lower the costs of reporting and publishing and connecting individual journalists and newsrooms around shared resources. One of the most ambitious of these projects is the Public Media Platform, which former NPR CEO Vivian Schiller said would “allow all of the content from [various public media] entities — whether news or cultural products — to flow freely among the partners and member stations, and, ultimately, also to other publishers, other not-for-profits and software developers who will invent wonderful new products that we can’t even imagine.”

In addition, collaboration between newsrooms and the public is growing. Examples include CNN’s iReport, Huffington Post’s OffTheBus and various crowdsourcing projects from ProPublica and others. As a society we are witnessing a technologically driven resurgence in all kinds of sharing, and journalism organizations are a key part of that development.

This new era of collaboration is not just a function of shiny new gadgets, platforms or programs. It’s impossible to ignore the effect the economic recession has had in prompting collaboration. We’re living through one of the most difficult periods in the history of the news business (albeit, one of the most exciting), where sharp budget reductions, shrinking ad revenues, dramatic shifts in audiences’ media consumption habits, and a range of self-inflicted wounds (from media consolidation to unhealthy debt loads) have upended news organizations’ longstanding business models and sparked an age of reinvention and experimentation.

Indeed, many collaborative journalism projects have either been started or are staffed by some of the 30,000-plus people who lost newsroom jobs over the last four years. Esther Kaplan of the Nation Investigative Fund, which “incubates and supports” investigative stories and journalists until the stories are published across a network of magazines like the Atlantic and Mother Jones, has called her effort a “social safety net” for laid-off reporters.

Journalism collaborations present opportunities to share resources and costs, allowing media outlets — especially independent ones — to maximize their dwindling budgets. Examples include the Investigative News Network and the Media Consortium, which help independent news organizations with things like back office support, fundraising, and the facilitation of editorial collaborations. In its big-picture report “The Big Thaw,” the Media Consortium suggests that the rise of collaboration represents a shift toward a human-centered “alternative economy” that puts community impact and engagement at the center of journalism.

Finally, the economics of collaboration are not only driven by what has been lost, but also by what has been gained as foundations focus on expanding their impact by supporting collaborative projects across organizations. According to J-Lab at American University, foundations have spent upwards of $143 million since 2005 to support new journalism projects, many with collaborative elements. The Corporation for Public Broadcasting (CPB) provided $1 million in mid-2010 for the new Public Media Platform initiative that hopes to create a shared API for community and public media. CPB and the Knight Foundation have also funded regional collaborative journalism ventures between local public TV and radio stations around the country.

Not all of the factors driving collaboration are external to the work of journalism itself. Many early converts to collaborative journalism argue that it produces a superior product. Spot.Us founder David Cohn has said, on more than one occasion, that if content is king, collaboration is queen. Through collaboration you can tap into skills and expertise outside your organization (such as multimedia production), uncover new story angles, bring in diverse perspectives, and extend the reach and influence of your work.

In the Columbia Journalism Review editorial mentioned above, the editors write:

From foreign capitals to U.S. statehouses, [journalism collaboration] is a way to extend our shrinking newsrooms, begin to rebuild public trust and ensure that the standards of the professional press help shape the development of new journalistic endeavors.

Everyone likes to win awards.

In recent years, collaborative journalism projects have been earning significant awards. ProPublica has won numerous awards for its collaborations with NPR and other new organizations. The California HealthCare Foundation Center for Health Reporting and the Chico Enterprise-Record won an award from the Association of Health Care Journalists for their joint reporting on woodstove smoke pollution. And the Tiziano Project won a community collaboration award from the Online News Association for its work promoting collaborative journalism in Iraq.

While the other factors above provide external pressure on journalists, most wouldn’t embrace collaboration if it wasn’t helping them do better journalism.

Regardless of the catalyst for collaboration, there is a growing sense in the news business that we are all in this together.

The magnitude of this shift toward working together, not just across newsrooms but across the profession as a whole, is perhaps best epitomized by the widespread adoption of a “Show Your Work” ethos. The credo, which encourages journalists and programmers to be transparent with the work they do and share the lessons of their work with the field, was first promoted by the Chicago Tribune apps team last year, and has also been [“embraced”: http://www.niemanlab.org/2011/12/propublica-experiments-with-show-your-work] by ProPublica — but the mantra has spread well beyond these two newsrooms. Dan Sinker, head of the Knight-Mozilla News Technology Partnership, called Show Your Work “perhaps the biggest thing to affect journalism development” of 2011.

Show Your Work is a great example of how collaboration can turn safety in numbers into strength in numbers. Instead of collaborating simply because everyone around you is trying to do more with less, this approach suggests that by working together, we can all achieve more with more. We can build on each other’s work, failures and successes to help build better journalism together.

What other motivations and external factors drive journalism collaborations, and how does understanding these catalysts help us better facilitate news partnerships?

Matt Schafer contributed additional research and reporting for this post.