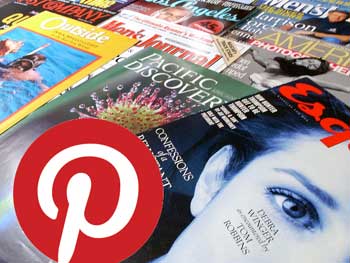 Despite what you may have observed, you can pin more on Pinterest than recipes, home décor, fashion, and enough DIY projects for a lifetime.

Much has already been written about magazines’ use of Pinterest. Because the majority of the site’s users are women, much of the coverage has focused on how Pinterest has presented opportunities for women’s magazines to share content with wider audiences and drive traffic to their own websites. But magazines of all types, beyond just women’s publications, can use Pinterest creatively to craft interesting selections of content to intrigue current — and potential — readers.

Despite all of these creative uses of Pinterest, we don't know yet whether the initial burst of hype about the site will really lead to more magazine readers long-term."

I spent hours on Pinterest looking for innovative ways that magazines — especially smaller publications, and those on non-lifestyle topics — are using Pinterest. Here are five creative strategies I found that might also be new opportunities for other magazines.

I was surprised to see how few magazines were posting links to collections of videos or other multimedia. Music and video provide a refreshing change of pace from Pinterest’s mostly static content. A few approaches to multimedia include:

Pinning for a Purpose

Some magazines focused on social and political issues are using their boards to curate their own work and other online material related to their causes.

Latinitas’ pins reflect a different perspective on fashion and beauty.

Readers can reminisce with Seventeen’s collection of vintage covers on Pinterest.

Quite a few magazines have created boards of “vintage” covers. One interesting example is Seventeen. Most of Seventeen’s boards have relatively few images pinned, seeming to reveal a minimal investment in its presence on the site. However, its “Vintage Seventeen Covers” board includes 79 covers dating back to the 1950s. Seventeen’s reader demographic, with an average age of 16, doesn’t really match Pinterest’s primary users yet, but the somewhat older women who are on the site might enjoy the nostalgia of the vintage covers.

Most of the magazines on Pinterest are lifestyle-focused consumer magazines, to be sure. But business-to-business (B2B) magazines haven’t ignored the site entirely. Finding the right approach for B2B content on Pinterest might be tricky, but here are a few magazines that have given it a shot.

This pin from Architect magazine is part of a board focused on visits to architects’ studios.

Despite all of these creative uses of Pinterest, we don’t know yet whether the initial burst of hype about the site will really lead to more magazine readers long-term. Consider this comment from a Pinterest user who learned about an apparently short-lived print magazine based on Pinterest content: “[O]ne of the things I love about Pinterest is that it’s not in print, no paper, no waste, no junk in my mailbox, no what page, what issue was that. WTF?!”