18DaysInEgypt: Crowdsourcing a Story of Revolution 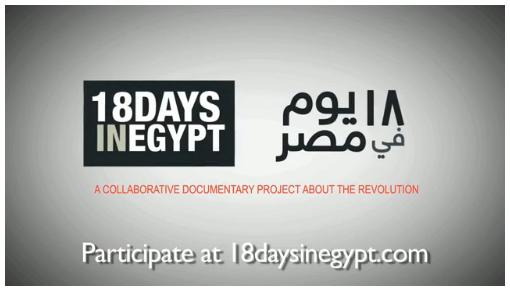 American documentary filmmaker and journalist Jigar Mehta is working on a new kind of documentary. 18DaysInEgypt is a crowd-sourced interactive documentary project aimed at capturing the history of the revolution in Egypt.

In the 18 days of Egypt’s uprising that began on Jan. 25, 2011 and ended with the resignation of former President Hosni Mubarak, thousands of Egyptians turned to their cell phones, digital cameras or social media sites to document the events as they were unfolding in Cairo and across the country.

Tapping into this wealth of material, American documentary filmmaker and journalist Jigar Mehta co-founded 18DaysInEgypt, a crowd-sourced interactive documentary project aimed at capturing the history of the revolution in Egypt. A former video journalist with The New York Times where he contributed to innovative collaborative media projects, Mehta was awarded a 2011 Knight Journalism Fellowship at Stanford University for 18DaysInEgypt and currently splits his time between the U.S. and Egypt.

18DaysInEgypt, a collaborative documentary project about the revolution in Egypt.

In his new capacity as digital entrepreneur, Mehta explains in a Q&A why he considers 18DaysInEgypt a pioneering storytelling platform.

Q: What triggered the idea to create 18DaysInEgypt?

Jigar Mehta: It was around day 17 of the Egyptian revolution. Just like many others, I was following the events via social media to know what was happening in real time. It was overwhelming to see masses of Egyptians taking to the streets in their remarkable bid for freedom, and ousting a leader so quickly. It wasn’t Al Jazeera or CNN telling me what was happening; it was the people who were there filming on their cell phones, taking pictures, texting, tweeting, Facebooking, live streaming on YouTube.That’s when I had my original inspiration: What would it be like to make a film using the media that people generated during those 18 days to tell their stories?

As 18DaysInEgypt kicked off, my team and I realized that the raw material created by Egyptians, whether a tweet, a photo or a video, was just the beginning of the storytelling process. The core part of the project has been to retrieve these snippets of moments captured by the people on location, collect their thousands of stories and make them available on our website, both in English and in Arabic.

Who is involved in the project?

JM: My business partner Yasmin Elayat, a software developer based in Cairo, and I are the co-creators. We teamed up with documentary producer Hugo Soskin to work on the story structure and with Emerge Technology, an Egypt-based software development company. We worked on building the online collaborative storytelling platform, GroupStream. In addition, we started a fellowship program targeted at young Egyptian university graduates. There are currently six fellows who are helping us to collect and post stories on the website, but also to share media through their networks, and encourage other people to contribute with their own stories.

The people who are registering on the website right now are definitely younger people, social media savvy users, bloggers. The stories are, nevertheless, representative of a larger section of the population because young users may post stories relating to their parents, or other, elderly, family members.

What is innovative about 18DaysInEgypt?

JM: First, we introduced something that is not a one-off initiative. Unlike a traditional linear documentary, this project is rather an open, interactive space. Second, this initiative removes the curator in that the person who created the media is the one who shares the story in the way he or she wanted to tell it.

We designed a user-friendly website that guides people through the process of creating a story by enabling them to upload and store media content, produced from events recorded in real time. The stories can then be shared and accessed by everyone now and in the future.

We look at 18DaysInEgypt as a “sandbox” to experiment and gain understanding in how people can tell stories as a group and experience that journey, which is a very important part of the storytelling.

2011 Knight Fellow Jigar Mehta explains what motivated him to set out to help Egyptians capture and preserve the media they had created during the revolution.

What is the project’s main appeal?

JM: I think it is its ability to show how stories are connected. We provide a place to create a story or timeline by pulling together all the media fragments from several sites and services. By adding date tags and map location, we are able to help users connect individual stories.

Besides, the site is updated every day as new features are introduced. We recently changed how we share stories: You can now like a story directly from the site’s main page.

What topics are covered in the stories?

JM: The stories cover a broad variety of topics and events such as the football match tragedy in Port Said stadium, women’s day, humor of Egyptian protesters, music and graffiti art inspired by the revolutionary struggle.

How has the Egyptian public responded to 18DaysInEgypt?

JM: Although 18DaysInEgypt started off as a project about the 18 days, we built the website in a way that it presents the history of the ongoing revolution. There are two interesting correlations that we have noticed in the response to our initiative. We launched the website on January 19 of this year and two weeks later, when the Port Said football disaster took place, we saw an incredible online traffic in people both registering and consuming present day stories. Furthermore, we have clearly seen a steady monthly increase in returning visitors, which is a good indication that people are wanting more.

Will the scope of the project evolve beyond the revolution? Will it expand geographically?

JM: Sure. We developed a project that really thinks in line with the way the web works; we do see the potential in this for many types of stories to be told in a new, open way. What we have seen since last year, through events such as the Arab Spring, the Occupy movement, the riots in the U.K., is that people first want to see raw media elements created from the frontline (photos, tweets, Facebook updates, YouTube videos) before going to traditional media. So a platform that allows storytelling in the rawest form is very powerful.

Our major plan for the next few months is to expand outside Cairo. We recently raised funds through Kickstarter, and soon we will have fellows in Luxor, Aswan, Suez, Alexandria, Port Said, and other parts of Egypt.

The biggest challenge remains the gathering of thousands of stories to contribute to Egypt’s big story.

How do you go about promoting the initiative?

JM: Our fellowship program is playing a big part in our promotional efforts. We organized a mass launch party in Tahrir Square last February 19, when the project successfully raised its funding goal. We are regularly calling on institutional sponsors and partners to support us. Not only are we feeding the site with rich content, we are also training the next generation of Egyptian journalists to gather and craft stories through the fellowship program.

We are actively involving the local press, both in English and Arabic language. We are relying on our personal networks, which is the most effective way to engage with communities and encourage more people to use the website and tell their stories.

What is your long-term vision for 18DaysInEgypt?

JM: We want to wrap up the project at some point. Perhaps after the presidential elections on May 23- 24, we will decide to stop collecting stories, then we can start working on what we call the “experience”: how to take all the collected stories and present them in a digestible format for someone who, in years ahead, would like to learn about the Egyptian revolution. This is a way to make history come alive.

Alessandra Bajec, Italian/French bilingual, holds a Master’s degree in Conflict Resolution and a Bachelor’s degree in Political Science. Between June 2010 and May 2011, she lived in Palestine, where she made her first steps as a freelance journalist. During that time, she reported on news events, conducting interviews and writing feature stories. She also contributed as English radio newscaster to Voice of An-Najah (An-Najah University). Her articles have appeared in Palestinian newswires such as the PNN, IMEMC, and The Palestine Telegraph. Now based in London, she is establishing herself as a regular freelance journalist. Her interests include Palestine, the Middle East, independent journalism, peace, human rights, and international travel.

This piece was originally published by the European Journalism Centre, an independent non-profit institute dedicated to the highest standards in journalism, primarily through the further training of journalists and media professionals. Follow @ejcnet for Twitter updates, here on Facebook and on the EJC Online Journalism Community.
Tagged: 18daysinegypt egypt jigar mehta mubarak revolution storytelling world view