Pizza With a Side of Attitude: The Rise of Snark Online 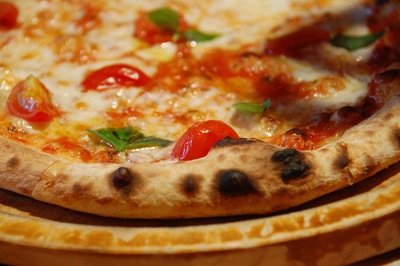 Writer and professor Devin Harner is finding snark in all corners on the Internet -- especially in food writing. Photo by "Chi (back in Oz)":http://www.flickr.com/photos/chiszeo/ via Flickr.

On Mondays, when my students ask me what I did over the weekend, I often reply, “read, wrote, and then read and wrote some more.” Most of the time, I’m being more serious than they know.

A few weekends ago was an exception, at least initially. I visited my family in Pennsylvania, made pizza with my mom, and repaired the turn signals on my classic Saab.

Snark is harder to take when the norms of genre dictate 'how to' or 'help,' and when generic boundaries are blurred."

However, these seemingly leisure activities ultimately led me back to journalism,
and to considering both the side effects of snark, and the growing importance of reader comments in online writing.

Snark informs a lot of what we read, listen to, and watch today. And lately, it has spread to counter-intuitive forms and genres. Out of context, without external referents, today’s snark is directed at the reader, and rather than laugh along with the writer at someone else’s expense, the reader’s left feeling sucker-punched.

I don’t typically follow a recipe when I cook. But sometimes I check my proportions with a quick Google search. That’s how I stumbled upon Slate’s new “You’re Doing It Wrong” cooking column, that sounds like it was written by the love child of Julia Child and Eric Cartman from “South Park.”

This particular recipe was for the Ultimate Homemade Margherita Pizza. Although the flour to water ratio seemed correct, the sauce was a bit heavy-handed. More problematic, though, was that the tone of the piece was off-putting to the point of being nearly unreadable.

The writer, LV Anderson, combined overwrought, affected intellectualism with stylistic cuteness, and attempted to balance the saccharin taste of both with a bitter dash of snark.

First she offered us a needless and formulaic history of the pizza stone’s use among “the Williams-Sonoma set,” and attributed the stone’s popularity to a New York Times article circa 1990.

Clumsy alliteration like “middle … moderate majority” also pushed me out of the story. As did the unnecessary use of the word “literally.” And then there was the pseudo-poetic construction: “acquiesce to the will of your fingers,” which has questionable connotations.

However, none of these issues would be deal breakers if not for the tone.

Readers were inclined to agree in their comments:

Another, speaking generally, was upset enough to use CAPS:

I HATE the name of this series. We live in such a rude world … I really look for a refuge from it in my reading material. Why so needlessly confrontational? And not ONLY the name, but also the whole concept … The title is obnoxious.

A third quoted a well-known sex columnist abruptly, but appropriately:

Perhaps the most venomous reader critique appealed to the credibility of Slate as a whole:

I hope Slate quietly ends this series, it is a small but clear embarrassment to the site. I heard LV Anderson on the Culture Gabfest — I am sure she is very bright and enthusiastic but also is about 13 years old and has no training in food. She also is a vegetarian or something and all of her “right way of doing things” is based on a very provincial (the way it was made at home) and yet somehow elitist (meat is murder) attitude. Seriously Slate, stop. Make her an intern or something but the kids are killing the site by being allowed to take on writing responsibilities they aren’t equipped to handle.

As I explored the rest of Slate’s recipes, I couldn’t help but notice that the tone I found in the pizza recipe was ubiquitous.

What’s for dinner over at Slate? Pizza with a side of bad attitude apparently. It might be a little bit of harmless fun that drives traffic, even for haters. (After all, I read it, didn’t I?) But a tonal problem is as bad as a logical, or quantitative problem, if it ultimately turns off readers (regardless of the number of hits).

The evolution of snark

Snark shouldn’t be a stylistic tick, or an easy, insubstantial surrogate for satire. Eric Cartman’s venomous one-liners aimed at his classmates wouldn’t be watchable for very long without “South Park’s” more complicated plot-level action. And when Jon Stewart and Stephen Colbert use fake news to skewer the real news, there’s necessarily a referent — the people and institutions who create, and inhabit, the real news.

The New Yorker’s film critic, David Denby, railed against snark’s increasing pervasiveness in our collective discourse in his book “Snark: A Polemic In Seven Fits” (2008). And, predictably, he was met with a barrage of snark that attacked him as an Internet-age Andy Rooney, and derided him as not funny and jealous of those with the ability to dish barbs. A number of bloggers denigrated him as the New Yorker’s “other” film critic, and insinuated that he was a second-stringer — all, likely, from the comfort of their parents’ basements. Denby traces snark’s print history from “Private Eye,” the British magazine, to the New York-centered “Spy” of the late ’80s. He notes, as well, that in the Internet age, snark has evolved into something much more virulent.

Yet he fails to consider that snark is rooted in the Net’s history, and that its impact was, to an extent, positive. As Steven Johnson explains in his prescient book, “Interface Culture” (1997), early web-based publications, and blogs like Suck.com, took advantage of the Internet’s unique grammar to comment on, parody and reference in a manner that was, at the time, revolutionary. This was, in a sense, snark-as-style.

In the cases that Denby mentions, like attacks on Ted Kennedy and Barack Obama, and in the Internet history that Johnson describes, wherein early guerrilla bloggers chastise the mainstream media, snark is directed at an external target in the public sphere.

In contrast, “You’re Doing It Wrong’s” snark is more of a Tourette’s-like outburst that attacks the reader. A more logical, and possibly, viable route for the series would be something like “Mark Bittman Is Doing It Wrong,” or “Anthony Bourdain Goes to Lame Places Suitable for Pensioners.” Of course, the odds of Slate besting Bittman or Bordain are slim. And, as a consequence of their vestigial, or possibly, congenital snark, they’re left in the unenviable position of attacking their readers. Or, perhaps in a variation of “Spy’s” print-era antics, they’re attempting to triangulate, and call their readers out as pretentious, while simultaneously striking a blow against the great unwashed, non-foodie masses who consider arugula a foreign threat, and who dine at the Olive Garden.

The problem here, rhetorically, is that by virtue of providing a recipe, Slate seeks to educate the same readers who they’re pushing out of the story with snark. Those of us who know how to make a pizza want to get on with making it, not watch Slate’s writer make fun of someone who doesn’t know how to make it. In contrast, part of the thrill of reading the late Christopher Hitchens in Slate was watching him pick apart a bad idea, or brutalize an inferior intellect. But contextual clues dictated that we wouldn’t go to Hitchens looking for help with a recipe.

Denby posits that snark is fueled by jealousy, that it enters the publishing ecosystem through those with lowest common denominator jobs at the fringes of the industry, and that it sticks with them as they work their way up into the halls of power. This premise is a bit of a stretch — although the blogosphere is clearly going through some growing pains, or, more properly, through a lack thereof, in that there’s limited stylistic growth or career mobility. The rebellious teenager energized by the DIY upstart-friendly ethos of the early web has become the bored, cubicle-dwelling thirty-something bumping up against the glass ceiling of modern publishing economics, never having written that back-burnered Great American Novel, and struggling to rise above the collective din to be heard. Although I’m talking about writers and editors, the metaphor is apt to describe readers, too, and this could account for the endless feedback loop of snark — both by and for “Office Space”-types who’d once aspired to more.

As a consequence, snark has lost its context and, most problematically, its external referents, and has made its way into more workaday writing. But snark is harder to take when the norms of genre dictate “how to” or “help,” and when generic boundaries are blurred. Cartman being a bully might be funny cathartically, because he takes us back, virtually, to the horrors of elementary school. But nobody would want to cook with him.

Although my Saab’s just returned to the realm of the living after six years in hibernation, there are still some issues left to sort out. Like right turns. When I checked out Saabnet.com, an old-fashioned BBS-style users’ group, the tone was remarkably different — even though repairing a car is much like following a recipe. Strangers who I’d never met before, writing for free, told me how to fix the turn signal switch with machine screws and epoxy to help me save 30 bucks at the junkyard. Drivers from all over the world posted detailed pictures awash in community and positivity.

When I returned to school that week, my introductory new writing class was brainstorming story ideas. Two bright students got hung up on another student’s pitch about our college’s new men’s volleyball team. They thought men playing volleyball was amusing, and wanted to write disparaging, gonzo-type stories. Another student wanted to write a day in the life of a new sofa in the heavily trafficked lobby of our building. Their default mode was snark before they could even write a lede.

These were ambitious, creative ideas, and possibly funny in the right context, but the students had allowed their stylistic and generic preferences to get in the way of their reporting of the news, as if the news itself was not up to the task of driving the story.

We teach grammar, news value, attribution, and story structure without even thinking about it. We also need to spend more time teaching tone in order to counterbalance the work of angry would-be cooking show hosts.

The upside to all of this is that reader comments often serve as ballast or as correctives. I’ve found myself increasingly browsing through them, post-story, to get the facts that the writer missed, or, even for a slightly less-jarring bit of snark that’s spontaneous rather than forced (and is thus enjoyable).

However, if we begin to rely too heavily on other readers’ comments to get the facts straight, to add relevant information that the writer missed, or to sort out tonal issues, then the story risks losing its value as a commodity.