Howard Rheingold: Knowing How to Collaborate Is Essential 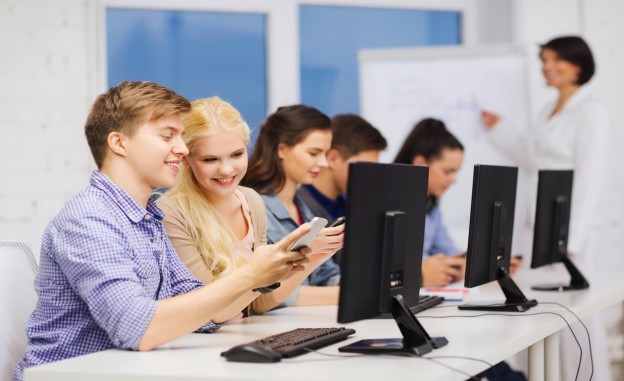 I just read the Kindle edition of “Net Smart,” written by writer and critic Howard Rheingold. The book provides a thoughtful analysis of some major theories and discourses about the “always on” era, while at the same time giving new insights and practical advice about the literacies we need to thrive in this environment.

Knowing the importance of participation and how to participate has suddenly become not only an individual survival skill but a key to large-scale social change." -Howard Rheingold

I’ve followed Rheingold’s posts and videos for some time now, attended presentations, and participated in some of his courses. He’s not only an expert in virtual communities (a term he coined himself) and social media, but also teaches digital journalism.

I had the opportunity to interview him recently about the implications of his thinking on media, journalism and journalism education.

MediaShift: Howard, how Internet-savvy are digital natives — do they need experts such as you to find their way?

Howard Rheingold: I started thinking seriously about the social media literacies that didn’t exist 10 years ago but are crucial today when I faced students at Stanford, a room full of “digital natives” in the birthplace of Silicon Valley, and was shocked to see the blank looks on so many faces on the first day of class, when I tell them that they are going to blog reflectively and collaborate on the wiki.

I had believed the mythology of digital natives and also assumed that most of today’s college students are like my daughter and all her friends. Some digital natives are extraordinarily savvy. When I taught digital journalism for five years at Stanford I learned to ask the other teachers who the most technically savvy students were. I made an effort to get acquainted with the most technically advanced students before they joined my required class.

A couple years ago, one of these students insisted that not only should digital journalism students blog, they should know how to lease their own server and set up their own instance of WordPress. “Can you show me how to do that?” I asked him. In turn, I took the instructions he gave me and made a step-by-step guide for the other students.

Eszter Hargittai’s empirical research seems to show that the economic class and amount of education that parents have is a strong indicator of whether a young person is likely to be able to competently evaluate information found online. And the latest report from the Pew Internet and American Life project indicates concerns about a widening knowledge divide and warns that “contrary to popular belief, young people are not digital wizards.”

More in particular: What are the special needs of journalism students?

Rheingold: My syllabus is a couple years old, but it’s a starting point — and the degree that my syllabus of a few years ago is out of date indicates how fast the knowledge needs change for today’s journalists.

A journalism student needs more than ever to learn and practice the arts of discovering and qualifying sources of information, cultivating networks of informants, developing a sense for newsworthy events, an ability to test the veracity of claims, a talent for putting together verified claims into active narratives — all skills that predate digital media.

But today’s media make it possible to set up an information radar within a few minutes after a newsworthy event occurs, summoning streams of information and media from thousands of sources that relate specifically to that event, filtering those streams socially and technically, curating and editing the results into a rapid response that broadcasts the refined information — the “news” — in a variety of media.

Learning how to use today’s and tomorrow’s tools, from social bookmarking to curation platforms, persistent searches to RSS feeds, is now part of the daily work of the journalist — who must exercise judgment about which of these skills are vital enough to learn, which are compelling enough to learn deeply, and which are best left to others.

Journalists don’t have audiences, they have publics who can respond instantly and globally, positively or negatively, with a great deal more power than the traditional letters to the editor could wield.

How far should the tech skills go — should a journalist have programming skills? Or is that something best left to others?

Rheingold: I think learning a simple programming language — you can get JavaScript lessons via Codeacademy — enables journalists to better know how to deal with the programmers they are going to work with. Much of journalism has become networked — the informants, the publics, the journalists, the journalism teams. You don’t have to be the best video editor in the world — sometimes you will team up with video editors and others — but every journalist ought to know how to put a simple digital video together quickly.

The point is not that every journalist needs to become a wizard, but that learning a little bit about something entirely new like programming is good exercise of the learning-new-stuff-all-the-time muscle that today’s and tomorrow’s journalists need.

You are known for giving students exercises in attention — rather than just ordering them to close their laptops during the course. In “Net Smart” you explain the importance of attention for all of us living in this era of ubiquitous computing.

Rheingold: Attention is the fundamental instrument we use for learning, thinking, communicating, deciding, yet neither parents nor schools spend any time helping young people learn how to manage information streams and control the ways they deploy their attention.

Why not include basic media mindfulness in the fundamentals that parents AND schools are expected to provide to their children if they want them to succeed in the networked society? Don’t parents need to weigh their urge to check their BlackBerry against their sons’ and daughters’ requests for their attention? Attention, and especially attention to media, is a topic that deserves a discussion more nuanced and more proactive than “multitasking doesn’t work” and “too many people are bumping into other people while looking at their smartphone screens.”

Rheingold: There are several important approaches to crap detection that ought to converge. First, this is another essential literacy. The authority of the text is gone forever; in the age of print, the author, editor, and publisher stood as guarantors of the veracity of claims.

Now that anyone can publish anything and search engines turn up inaccurate information, misinformation, and disinformation along with accurate claims, the consumer, not the producer of information, must test the validity of claims. Everyone must learn some elementary critical skills for evaluating information. However, both algorithmic techniques and social (crowdsourcing) techniques are emerging for trying to filter out the bad information and float the best information closer to the surface.

I get into detail about these emerging techniques in my book. So there certainly is a place for multiple kinds of automated and social-algorithmic approaches, in addition to the education necessary to spread the essential literacy.

Some would say that most people are gullible, ill-informed, and easily influenced. At the beginning of the 20th century, the American journalist Walter Lippmann made this argument in his book, “Public Opinion.”

The American philosopher and educator John Dewey responded that if this was the case, we need to build better educational institutions and encourage better journalism, so that people would be less ignorant and better informed. I’d say that this tension still holds, but is multiplied by the overwhelming floods of information that new media afford.

The “people formerly known as the audience” are now participating very actively.

Rheingold: The web and the whole world of digital media are built on broad participation. Without millions of people putting links on their blogs and websites, there would be no web and search engines would not be able to aggregate those decisions.

The political public sphere, citizen science, crowdsourcing and crowdfunding, open-source production, emergent collective response to disaster, the blogosphere — many capabilities and institutions that didn’t exist a few years ago are now wielding computational, economic, political and cultural power, not because of top-down planning by big government or big corporations but by the active participation of billions of people.

Knowing the importance of participation and how to participate has suddenly become not only an individual survival skill but a key to large-scale social change.

Should media evolve to many-to-many networks, with peer-to-peer learning processes, or should we preserve the values of the classic broadcasting model?

Rheingold: Wikipedia, open-source production, distributed computation, citizen science and citizen journalism, crowdsourcing, smart mobs from Arab Spring to Occupy Wall Street, massive open online courses, global citizen response to disasters such as the Asian tsunami, Hurricane Katrina, and the Haiti earthquake, grassroots political organizing from the Howard Dean campaign to the Tea Party — digital media and networks have lowered the barriers to collective action in practically every sphere of human life — the collection of knowledge, the application of computing to scientific problems, the scientific examination of large amounts of data, the selection of political candidates and the organization of political demonstrations, the cooperative creation of encyclopedias, operating systems, and browsers, the delivery of educational material, reporting of news events.

Knowing how to participate is just the first step. Knowing how to collaborate has become essential to individuals who want to succeed in the 21st century and to the health of the culture that is emerging.

Rheingold is a believer in learning. We can learn the necessary literacies in order to deploy “the right kind of collaboration.” Right now he facilitates a collaborative project aimed at creating a peeragogy handbook. Peeragogy is like peer-to-peer pedagogy, self-learners collaborating via a variety of social media to create, deliver and learn an agreed curriculum (which they compose themselves).

I participate in that project, which proves to be a fascinating confrontation with the possibilities, but also the challenges, of peer-to-peer produced media. I hope to report about it in a later installment.

In the meantime, here’s a video in which Rheingold explains “Net Smart” for the Massive Open Online Course (MOOC) Change11.