FTC: If It’s Your Computer, You Should Own Your Data 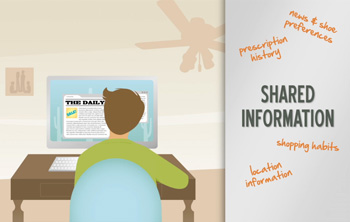 The FTC released a report Monday on Internet privacy. The main message was: If you own your computer, you should own the data on it.

If you own your computer, you should own the data that’s on it. That’s the message from Federal Trade Commission Chairman Jon Leibowitz.

At a Washington press conference — also broadcast — the FTC issued a new report on Internet privacy. Leibowitz praised how far the nation’s come in protecting data, even from this time last year. But he also shared that consumers still need more clarity and control over their personal information.

'Do Not Track' from our perspective means do not collect." -Jon Leibowitz, FTC chairman

The event opened with this animated primer about how information is collected, and where it goes.

The FTC made three main recommendations:

“‘Do Not Track’ from our perspective means do not collect,” Leibowitz said. “We need to have a ‘Do Not Track’ option that is persistent, easy to use and effective. “

In the past year, he said, large platforms and marketers made a lot of progress toward protecting privacy, partly because it’s the right thing to do, and partly because they want to keep consumers’ trust.

“It’s amazing how far these companies have come,” Leibowitz said. “I think we’re all pulling in the right direction. People just get it — it’s the right thing to do … It’s better for your business.”

Overall, the report falls more into the category of “best practices” than regulations. The point, he said, was “not to erect a stoplight, but to take a look at the traffic patterns.” Yet he urged Congress to enact tougher privacy protection laws, and noted that the FTC’s power is based in its ability to enforce the law.

The lengthy report certainly sets the stage for more debate. It ends with a dissenting statement from FTC Commissioner J. Thomas Rosch. His concerns include that the report had no limiting principles, and could be seen as a mandate.

“It would install ‘Big Brother’ as the watchdog over these practices, not only in the online world but in the offline world,” he wrote. He also added that there’s no universally accepted definition of what “Do Not Track” means.

“I still worry about the constitutionality of banning take-it-or-leave-it choice (in circumstances where the consumer has few alternatives),” Rosch opined. “As a practical matter, that prohibition may chill information collection, and thus impact innovation, regardless whether one’s privacy policy is deceptive or not.”