Romenesko Gets His Mojo Back After Leaving Poynter 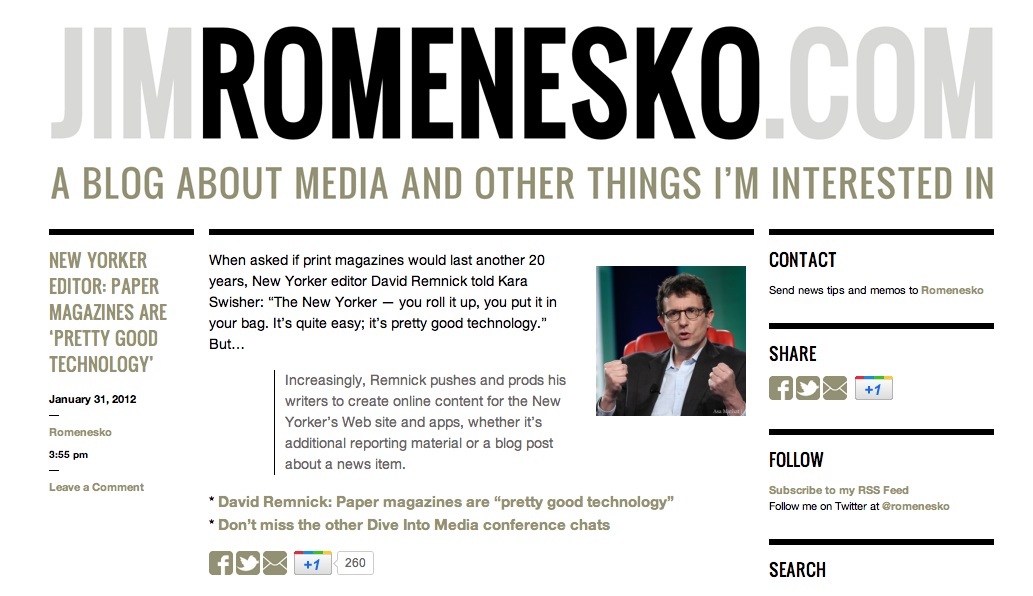 Jim Romenesko is having a good time. Lately, the “journalism evangelist,” “KING of the blogosphere,” and “go-to source for news about the news“ has been waking up earlier, posting more often, and featuring content he had not felt free to publish for more than a decade.

In the wake of his abrupt departure from The Poynter Institute late last year, he established an eponymous independent site that has quickly been embraced by media professionals, educators, students, and even a few Facebook spammers worldwide.

"Romenesko never seemed a good fit [at Poynter]. Just look at the pictures of the Poynter staff in their tiny little mugshots and compare them to photos of Jim. He looks like a serial killer next to their smiley faces." -Michael Koretzky

In just over two months and 400 posts, JimRomenesko.com has become the journalism community’s newest destination site. The rapidity of the site’s rise in popularity and influence has even surprised its founder. He is beginning to earn revenue from related advertising, but sees the cash simply as a bonus.

“I guess in many ways this is my retirement blog,” said Romenesko, 58, in a recent phone chat. “I feel that I can get up and start working when I want to. I can stop when I want to. But it’s been so much fun that I actually get up earlier now than I did when I was employed by Poynter. I enjoy posting on weekends. I don’t see it as work. It’s kind of a hobby now, and it’s fun.”

“How did this go off the rails?” That question began his new blog’s opening post, which detailed the collapse of the Poynter Romenesko media blog he had updated for more than a decade.

A small set of buzzwords and phrases included within the mid-November post sparingly tell the tale: changes to the site, traffic decline, 12 year itch, retirement, doing a media blog on my own, “semi-retirement,” cross post items to Poynter, odd arrangement, smelling bait and switch, the word plagiarism, response was overwhelmingly supportive, called my father, “I resigned from Poynter yesterday,” they were still using my name, cease and desist, Romenesko+ became MediaWire.

It is his most-commented post so far. “When I wrote that very first post explaining what went down and people saw there was a lot going on and had been a lot going on prior to that, just putting that out helped things die down,” he said. “For me and for readers, I wanted to close the book on that. I’m certainly looking ahead, not back.”

He said he has been heartened by the high traffic, the enormous level of interactivity, and the longtime readers who have followed him to his new web home.

One of those readers is Michael Koretzky, a journalist currently serving as director of NYC12, the Spring College Media Convention hosted by the College Media Association.

“I wasn’t outraged by the Poynter-Romenesko dispute because I never could grasp how that relationship started in the first place,” said Koretzky. “Poynter always reminds me of Mater Christie, the Catholic school I attended in fourth and fifth grades — the education was so much better, but the rules were so much stricter. Romenesko never seemed a good fit for that. Just look at the pictures of the Poynter staff in their tiny little mugshots and compare them to photos of Jim. He looks like a serial killer next to their smiley faces. Jim’s site looks like he writes— it’s simple, easy to read, and doesn’t try to be more than it is.”

It is clear the “dean of media bloggers“ has once again found his swing. He is blogging with a renewed vibrancy and candor. He’s inserting more of his personal voice into posts, including periodic giggly headlines and other dollops of dry wit. The writing overall is indicative of a man who is enjoying what he is doing.

Most exciting, he is again delivering scores of shorter posts. They entice readers to scan and click on outbound links without getting lost in the permalinked purgatory of Poynter’s MediaWire.

Five months later, Lavin sees a number of positive changes within Romenesko’s work. “In his post-Poynter product, Jim has expanded his sourcing and list of topics and seems to pay even more attention to packaging,” he said. “If anything, there is now a broader range of topics — all related to newsrooms, the people, processes and products that make them hum. Jim links to material about errors, headlines, job changes, and covers a wider variety of topics than other trade publications.”

A week before that, he published a spirited post about the Fox News “PR Machine” that included journalists’ stories of the network’s heavy-handed media relations tactics. “I would not have done [the Fox News post] in the old days,” Romenesko said. “Now, I can set my own rules. I don’t have someone saying you should put quotation marks here and commas there. It’s a whole new game.”

For Romenesko, the game now includes new competition: MediaWire, the blog that used to bear his name. “I know they get a lot of the same tips that I do,” he said. “For example, when Halifax Media accidentally listed The New York Times papers on their site before the deal was done, I got that leak and Poynter got that leak. I just happened to post mine first and beat them by a half hour and because of that I had absolutely huge traffic, 1,000-plus people looking at the page at one time, which are numbers I never had at Poynter.”

Andrew Beaujon, the current arts & entertainment editor for TBD.com in Washington D.C., is assuming a lead role with MediaWire later this month. Beaujon, recently dubbed the “new Romenesko,” has the respect of the original. “He’s a good reporter,” said Romenesko. “I remember posting an investigation he did [with other TBD staffers], an assessment of all the Patch sites in Washington. It was a really good piece. I think he’s solid. He has his fan base. I think he’ll do well.”

In a phone chat yesterday, Beaujon confirmed the admiration is mutual. “I’ve been a big fan of Jim Romenesko for a really long time,” he said. “Not just because of the work, but also because he was a media blogger who really cast a wide net in terms of the people and the journalism he would feature. . . . [On his current site] he’s doing a lot more reporting and it seems really energetic and engaged. He was a model for media reporters before and he’s even more so now.”

He said he does not view Romenesko as a competitor beyond the literal definition of them encompassing the same beat. “Jim is like a 100 times better sourced than I am,” he said with a chuckle. “I’m going to have to build this beat very slowly. . . . I think more news is always good. I look forward to reading him as much as I always have, which is every day. I hope I’ll be able to contribute something too.”

Since the launch of JimRomenesko.com, the two blogs have regularly traded scoops and offered competing or complementary voices on the same issue or event. Two of Romenesko’s biggest “gets” since going independent: New York Times public editor Arthur Brisbane wrote him during the “Truth Vigilante” column brouhaha; and University of Iowa journalism professor Stephen Bloom emailed from “an undisclosed location” amid the fallout from his Atlantic article “Observations from 20 Years of Iowa Life.”

Romenesko also now seems to finally get social media. He tweets, posts and interacts on Facebook, bases blog posts on Twitter and Facebook feedback, and has activated Facebook comments to appear below all posts along with regular site comments. (His Google+ presence is bare-bones. He views the platform as “a very lonely room.”)

“I really like how his website has Facebook comment integration because pretty much everybody who interacts with Romenesko is involved with or has connections to journalism,” said Doug Brown, a journalism master’s student at Kent State University who was featured on JimRomenesko.com last month for his investigative reporting prowess. “It leads to some good discussion about important topics. His posts seem like he’s leading a discussion, and because informed people are discussing, it works.”

The Fringes and Edges

From the start, the site’s tagline has stated boldly: “A Blog About Media and Other Things I’m Interested In.” Those things include real estate, food and finance. He admits though that so far the tagline’s second half has not panned out. Write-ups focused outside the realm of in-the-moment media news have gained minimal reader reaction and traffic.

As an example, he cited an early December post recounting his interactions two decades ago with a Brooklyn man nicknamed Full Force Frank who described himself as “one pissed-off psychopath!!!”

The 1,400-word reflection fleshes out Frank as one character within the larger fanzine culture Romenesko once worked within and helped introduce to mainstream journalists. It features letters Frank wrote to Romenesko, a pair of related articles Romenesko published, and an embedded video of Frank ranting and holding a gun.

It garnered no comments. “I thought it was pretty interesting,” Romenesko said, laughing. “I think it maybe strayed too far to the fringes and edges.”

Subsequently, for the most part, he has stuck to straightforward journalism and media news aggregation. It is a switch from his public stance prior to the Poynter plagiarism saga. In August, he referred to aggregation work as tedious and increasingly crowded with competitors. “I’m not going to be doing three-sentence summaries of other people’s work,” he told The New York Times about his independent site plans. “That’s behind me.”

Now, the future is less certain. When asked about his next step, he paused a bit and initially stumbled while searching for the right words. “I guess, I, I don’t know,” he said. “I’m not the kind of person who’s going to sit in a chair and do nothing. As long as this is fun, I’m going to keep doing it.”