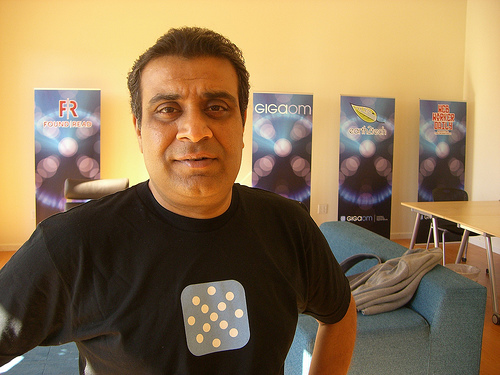 When the U.K.-based Guardian Media Group bought PaidContent in 2008, it was portrayed as an attempt to expand into the U.S. market. The Guardian newspaper was a forerunner in its use of the web, and already got a large portion of its traffic from North America.

But I had trouble seeing why a general interest news organization, even a forward-looking one, would buy what was essentially a network of niche sites geared toward media and technology executives.

"The ethos of PaidContent and our company are in sync." -Om Malik

Now, a company that’s steeped in the businesses of Silicon Valley, GigaOm, has a acquired “the best chronicler of the media industry,” founder Om Malik wrote on his blog yesterday. “The ethos of PaidContent and our company are in sync.”

“Just married the woman of my dreams & the company I founded got the best owner possible. Both after false starts,” he tweeted from New Delhi.

When news of the acquisition spread this week, it wasn’t a particular surprise to anyone who’d been watching either company over the last several years. It made perfect sense — more than the Guardian purchase in 2008.

The news signals two things: 1) the formation of a tech media super-group and 2) the shift in strategy the Guardian had mentioned.

New York-based PaidContent has since its founding in 2002 been one of the leading properties covering the business of media, especially digital. It expanded into coverage of mobile with MocoNews, Indian tech media with ContentSutra, and launched PaidContent:U.K. The sites in January received more than 700,000 unique visitors, according to reports.

The GigaOm network, founded by Malik in 2006, is based in Silicon Valley and covers tech industry verticals such as clean tech, broadband and Apple. It says it receives 4.5 million unique visitors monthly.

Both networks were founded by Indian-born journalists who’d worked in the heady 1990s of New York’s Silicon Alley, Ali for Silicon Alley Reporter, Malik for Red Herring and Forbes. Malik moved to Silicon Valley in 2000 to work for Business 2.0.

Ali and Malik are also good friends, and Ali is on GigaOm’s board of advisers.

Malik has talked of wanting to try his hand in business after covering it for so long. He worked tirelessly to build his company from a blog covering technology to a network, a research subscription service, and an events company.

Standing with Ali and Malik in the fall of 2007, I heard Ali quietly caution his friend to take care of his health. “Blogging can kill you,” I remember him saying. Eerily, a couple months later, Malik suffered a heart attack. He has recovered but is said to be more careful about his work habits today.

Ali, whom I have worked for and with and who is also a friend, has told me of running the business off his laptop both in London and from his apartment in Santa Monica, Calif., where he lived before coming to New York a few years ago.

He, too, worked tirelessly and because of that, PaidContent developed a reputation for never missing a beat. He formed the company almost by accident, having launched it as a way to get a job after Silicon Alley Reporter, and was able to sustain himself with speaking engagements and a few sponsorships.

He hired noted journalist Staci Kramer, who helped him build the site and the staff and became senior vice president at the parent company ContentNext.

“This is a great outcome of an intense process,” Kramer wrote me last night in an email. “Guardian News & Media gave us a great vote of confidence with the initial acquisition and again now by making sure we were matched with the right company, then staying as minority shareholders.”

Malik wrote that the “first and perhaps most important reason” for the deal was “people. I have been an admirer of PaidContent’s editorial team from the very beginning of its journey. Rafat Ali and Staci Kramer were two of my favorite writers in the early days of professional blogging.”

He also cited others on the team, including Ernie Sander (whom I worked with at the AP), who he said would become “executive editor of our sprawling online editorial operations.”

Together, Ali, Kramer and others built an event business and launched ContentNext Dex, a financial index of media-related sites and a research arm, neither of which seemed to take hold. Ali told an M.B.A. class of mine he visited last year that ContentNext, which he left in 2010, made a significant share of its revenue from events.

After 2008, New York media types sometimes marveled how Ali & Co., and Mediabistro.com founder Laurel Touby, my former boss, both sold just before the “nuclear winter,” as a friend from Mediabistro called the subsequent economic collapse.

Mediabistro was paid $23 million by what’s now WebMediaBrands, $3 million of that in longer-term “payout” bonuses should the company hit certain performance markers. The Guardian paid 4 million pounds (about $6.3 million at today’s exchange rate) for PaidContent in 2008, the Guardian reported yesterday.

The guardian as PaidContent’s guardian

It’s not surprising that in the recent environment and focused on other areas, the Guardian couldn’t quite make its new venture thrive.

One of the smaller of leading U.K. media organizations, and solely owned by a trust to keep it independent, the Guardian Media Group has struggled financially in recent years, reporting a before-tax profit for 2011 of 9 million pounds (about $14.24 million) after losses of 96.7 million and 171 million pounds, respectively, in the previous two years.

It has, meanwhile, pushed to get more of its operations into digital, an area where it could be innovative and expand its footprint to new markets.

It has launched blogs headed by aggressive reporters, had “hack days” that invited developers to figure out new ways to cover and present news, developed multiple feeds that allowed seamless intake and display of news and information, even given rather open access to its wider database via APIs (application programmer interfaces) that let others build applications on its proprietary data.

In the annual report, the company said its re-version-ed iPhone app had 322,000 downloads in less than its first three months. It last month ended a three-month free trial of its iPad app, opting to charge 9.99 pounds (about $16) after a week.

Guardian News & Media, the division that bought ContentNext, announced last November that “following a strategic review” it was looking for a buyer for ContentNext while it turned its U.S. focus to “building the Guardian.” Guardian Media Group’s 2011 annual report said the company was “looking ahead to further digital launches … most importantly a major expansion in the U.S. with a new digital-only operation based in New York.”

It recently launched the U.S.-focused GuardianNews.com.

Under terms of the deal, Guardian News & Media gets a minority stake in GigaOm alongside venture investors such as Reed Elsevier, Alloy Ventures and True Ventures. It also gets an observer seat on GigaOm’s board, Malik said.

‘A Fraction’ of the Original Price

Neither Malik, the Guardian nor ContentNext named a price. Ad Age reported it was a “fraction” of the original deal. Guardian representatives pointed me to their statement online.

By taking a seat on GigaOm’s board, the Guardian perhaps hopes to learn more about how the digital world works at the cutting edge. In turn, GigaOm gets more knowledge of media and the international sphere.

GigaOm, in acquiring ContentNext, gets a presence in covering the New York-centric media world, a crowded arena in which it has made forays but never solidified its hold.

They will turn the New York offices of ContentNext into GigaOm East, just blocks from where Ali and Malik used to work.

A GigaOm representative told Ad Age the company would keep PaidContent at its current web address and hadn’t decided whether to fold it into GigaOm.com.

“By blending [PaidContent’s] coverage with ours, we hope to watch this fast-changing industry ever more closely,” Malik wrote.

The GigaOm purchase is hardly an “OMG” — it just makes good sense.