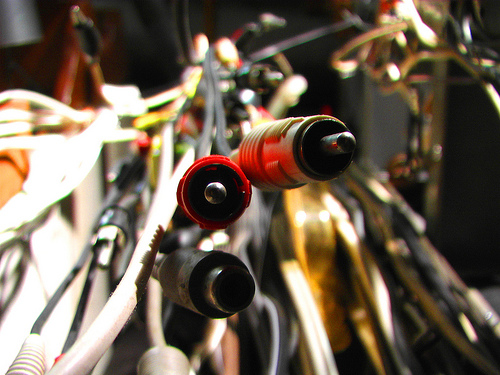 Dan Reimold is more than a half decade into cord-cutting, and he's never looked back. And the tools he's used are pretty simple. Photo by "Sean Bernard via Flickr":http://www.flickr.com/photos/seanbernard/.

This essay is part of a longer e-book. Get it today!

I cut the cable cord in early 2006. When I tell friends and colleagues I’m a cord-cutter, the biggest misconception — beyond initial worries about the phrase involving bodily harm — is that I don’t watch TV.

I have a 42" flat screen. I watch TV all the time. I just don't watch regularly scheduled, commercially interrupted, monthly bill-required network and cable programming."

I have a 42” flat screen. I watch TV all the time. I just don’t watch regularly scheduled, commercially interrupted, monthly bill-required network and cable programming.

Instead, I catch my favorite shows, new and classic movies, real-time sports, and breaking news for free, on my TV, through the Internet. For example, in the throes of Linsanity, I have recently caught a few New York Knicks games by streaming the regional MSG Network broadcasts. In recent months, I’ve also tuned into most of the GOP presidential debates via web fixes that hooked me into the channels on which they aired. And on an upcoming weekend, I have downloaded versions of “The Descendants” and Liam Neeson’s “The Grey” ready to screen at my leisure, neither of which are out yet on Blu-Ray or DVD.

The last program I watched at home on “regular TV” was the 2006 Super Bowl. The Steelers trailed the Seahawks early on, but inched ahead in the second quarter on a touchdown run by quarterback Ben Roethlisberger. They didn’t look back.

Neither have I. I’ve enjoyed TV 2.0 every day since my cable split. Now more than a half decade into my cable-less existence, here are 10 lessons I’ve learned.

1. Almost anyone can cut the cord. I am a low-scale techie. I do keep up with the latest web and digital trends, apps, platforms and networks. But I am not a new media mad genius. When I cut the cord, I Googled, found a few help sites, bugged a few plugged-in peers, and called a younger brother who once worked at Best Buy. It took a day to figure out, a few months and lots of experimenting to master, and a year to feel like an expert.

2. There are five tools I’ve relied on since cutting the cord: a TV, a computer-TV adapter, a netbook, an external hard drive with tons of storage space, and uber-fast Wi-Fi.

I love checking out YouTube videos on my laptop, but for full movies, shows, and one-event wonders like last spring’s royal wedding or President Obama’s news conference confirming Osama bin Laden’s death, I prefer the larger screen and better sound quality of my TV.

I use a netbook for all the downloading and streaming because my laptop is employer-issued. I don’t want the weird programs, strange pop-up ads, occasional viruses, and constant downloading associated with my Internet TV scheme to ruin it. So I bought a cheap netbook, plugged it into the TV with an adapter from RadioShack, and treat it as the greatest cable box/DVD player ever invented.

I rely on a hard drive because I quickly ran out of storage space on the netbook. Even on a standard PC or laptop, after a year of downloading, you will find yourself with the same problem. I don’t want to continually trash or overwrite my growing digital media library, so instead I transfer everything to a 2-terrabyte portable hard drive. (I’ve upgraded hard drives twice in the last six years.)

Finally, decent Wi-Fi is a must. Otherwise, the streaming will be tortuously buggy and the downloading tear-your-hair-out slow.

3. From a content perspective, there are competing cord-cutting philosophies. There is the legal way, and the other way. Netflix, iTunes, Blockbuster, Hulu and PlayOn are lovely services. I have never used any of them. Instead, some of us revel in the freedom and free price tag of less-than-legal downloading services and streaming sites.

4. In the cord-cutting community, I am squarely in the ADSS (always downloading, sometimes streaming) camp. I prefer downloading because it is fairly quick (on my Wi-Fi, most feature films take a half hour, sometimes much less), the quality is usually higher, and the content is then mine to keep for as long as I want it.

My experience with streaming has been hit and miss. At times, it provides the show I want within seconds, but it often comes with maddening side-effects — ads that pop up or blare loudly from the side every few minutes; buffering bonanzas that make a two-hour movie a six-hour stop-start event; and quirky shutdowns that require total reloads simply because I clicked the mouse on the wrong spot or didn’t touch the keypad for a while.

5. By cutting the cable cord, I have not only saved money. I have also made money — and rid myself of some clutter. With my netbook and external hard drive now holding all the movies and TV shows I will ever have time to watch, I have slowly been selling my once-vast VHS and DVD collection. What I’ve found: People still enjoy purchasing both on eBay and at yard sales. I have also donated some dust-gathering Disney titles to Goodwill (to lessen the illegal downloading guilt).

6. Over the past six years, my viewing habits have changed, especially for my favorite TV shows. I am no longer interested in fall premieres or weeks in which new episodes air. I am most excited when the shows’ seasons end. Almost immediately, I download the entire season and watch the episodes straight through in a relatively short time.

Additionally, my TV viewing no longer includes a bunch of separate shows watched altogether in a prime-time block. Instead, I watch one show, repeatedly, until I run out of new episodes, and then I move onto the next one with the same short-burst intensity. For example, for the last week, during my downtime, I’ve been watching almost nothing but season 6 of “Dexter.”

The upside, of course, is enjoying uninterrupted new episodes of my favorite programs. The main downside is that I have to avoid all web and bar chatter about the shows until I can get caught up. One other downside: At times, I notice that the quirks and characters I like in small doses on my favorite shows (like Masuka on “Dexter”) become grating when watching them back to back to back.

7. The main viewing shift I’ve made: passive to active. Without cable, I cannot simply turn on a TV and let the channel guide lead me to entertainment nirvana. Instead, I hunt. I download overnight so a show’s full season will be ready for me the next day. I mark down upcoming must-watch college basketball games or the next Comedy Central Roast on my iPhone calendar so I can remember to real-time stream. The closest I come to channel surfing is web searching. For example, a few months ago, I typed “PBS” into a streaming site’s search engine. Within seconds, I had a week’s worth of documentaries and specials to watch.

8. Even without cable, I have never felt out of the loop on buzzworthy new shows or must-watch “Saturday Night Live” skits or “Daily Show” segments. The only category in which I sometimes feel left behind, strangely enough: commercials. My students or friends will occasionally reference a new, hot commercial making the rounds on prime-time and I will have no clue what they are talking about. I used to jump onto YouTube to play catch-up, but over time I’ve made peace with my mostly commercial-free existence.

9. The cord-cutter’s life is far from perfect. I have spent hours waiting for a movie to download or stream and then find the file is corrupted or sporting laughably low quality. I will be watching a big game only to see the stream suddenly shut down (typically pulled for copyright infringement) just as it heads into overtime.

On some streams, I will have to get up every few minutes to close a pop-up ad or turn off the sound on a side ad. Some of the files I download will be watchable but overlaid with foreign language subtitles or random web addresses. And my netbook has also taken a beating via the viruses that accompany the files and programs I continually load onto it.

10. Watching cable TV at a friend’s house or a hotel has become an act of not only entertainment but nostalgia. Clicking through channels with a remote. Waiting to see what’s on, without any control. Forced to watch one episode of a show at a time.

It all seems so quaint. I don’t mind it. But I definitely don’t miss it.

Note: PBS MediaShift and PBS do not endorse the use of illegal or possibly illegal sites to download content online. This piece is the author’s opinion and experience.