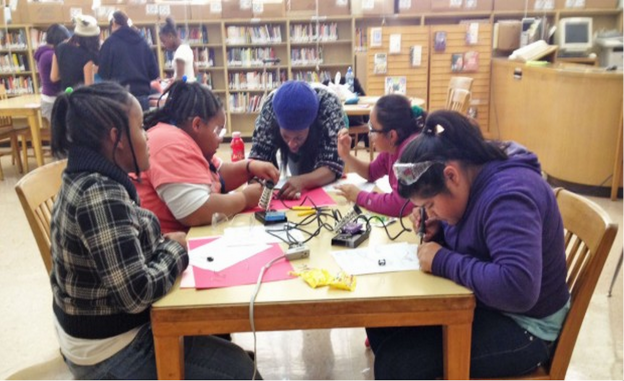 Middle-school students learn how to solder in an after-school science program.

For Ebony Green, a career as a scientist might have seemed unlikely just last year.

"Once these girls get that satisfaction from knowing they can do something that most adults don't know how to do, that knowledge in itself is so empowering." -Esosa Ozigbo

The stereotypical outcome for girls like Ebony, an eighth-grader at Frick Middle School in a rough part of East Oakland, isn’t necessarily a high-paying job in science, math, engineering or technology. In fact, 40 percent of Oakland Unified School District students drop out.

Still, despite her surroundings and the legacy of her race, gender, family background, and income bracket, Ebony sees a different future for herself. She wants to be a pediatrician, or maybe a vet, and she’s starting to take steps to get there.

Last fall, without her mother knowing, Ebony enrolled herself in Techbridge, an after-school science and math program geared specifically to girls. She signed up for math tutoring at school because she’s struggling in the subject. And her science teacher, Ken Eastman, says she even came to his science class twice a day for a while.

Ebony’s interest in science stands in contrast to the reality of women working in STEM (Science, Technology, Engineering and Mathematics) fields. Although women make up half the country’s work force, they comprise less than 25 percent of STEM-related jobs, according to a Department of Commerce report from last year.

Apart from the overall problem of cutting out hands-on science projects and tinkering in schools, the issue is even more pointed when it comes to girls. A recent study called “Why So Few“ shows that only 20 percent of bachelors degrees in STEM fields go to girls.

Thirteen-year-old Ebony Green has hopes for a career in science.

But Techbridge is showing Ebony an alternate future. Once a week, she and 20 other girls voluntarily stay after school from 3 to 5 p.m. to get their hands on soldering irons and protractors to make things like LED-lit sculptures and catapults. Beyond teaching these girls those specific skills, Techbridge is giving them something much more.

“It’s interesting to me,” Ebony said. “Because some things that I didn’t believe, I believe in now. I never knew about soldering, or I never knew about crystals or anything like that, and since I’m interested in that I wanted to get into a program where it’s a lot about it.”

THE IMPORTANCE OF ROLE MODELS

One thing research consistently shows is the impact that one-on-one relationships and role models can have in influencing kids. And that’s one of the defined goals of the Techbridge program.

To that end, Ebony and her peers get to work once a week with Esosa Ozigbo, who comes from a similar background as many of the girls in the program — single-parent home, struggling financially, parents who never graduated from high school. But Ozigbo, a Stanford graduate with a science degree, is living proof that there’s a way out — and it might just be in a field like science or math.

“I definitely know that growing up, it would have been great to have someone like that come in and talk to me,” Ozigbo said.

Ozigbo leads Techbridge field trips, taking girls to companies like Google and Yahoo for site visits so they see for themselves the possibility of a life that’s different than what they’ve lived so far.

“I took some girls to San Francisco — they had never been on the other side of the bay,” she said. “It’s just about seeing what’s out there and seeing if it’s in your grasp and saying, ‘This is what I have to do, this is what I can do.’ I think that makes the world of a difference.”

Though they only meet once a week, Ozigbo makes sure to connect personally with the girls. Sometimes she takes Ebony home after, and they have a chance to talk about what’s going on.

“Even in that short time, we’re going to reach them all, we talk, we laugh, we joke about things like guys and stuff like that,” she said. “We tell them to always stand up for what you believe in, we do shout-outs to the girls who get up so they learn how to be comfortable when speaking in a crowd. It’s little, but I’m hoping that those little different things will make a big difference in the end.”

Claude Steele thinks it will. Steele is the author of “Whistling Vivaldi and Other Clues to How Stereotypes Affect Us” and the dean for the School of Education at Stanford University.

“What those girls will see from that kind of a program is that women do succeed in these fields, that role model strategy is a really effective one,” Steele said. “It’s the existence proof idea, the stereotype may be out there, but look, there’s a woman who is succeeding, and that means it’s possible for me to succeed, and it starts to reduce the sense that I would worry about being seen stereotypically.”

Teacher Esosa Ozigbo, far left, jokes with students, cheering them on when projects are complete.

Learning About Search from Google

Tasha Bergson-Michelson, a search expert at Google, is one of the women that Techbridge girls get to meet. Last month, a group of girls from Montera Middle School in Oakland were brought to Google to learn some important tips in using the site to conduct research — whether it’s simply for curiosity or for a school project.

“I believe that access to information is one of the greatest equalizing forces,” Bergson-Michelson said. “Knowing how to find information, evaluate it, and use it appropriately is one of the ways we see a divergence among people who have access to education and those who don’t. “

Bergson-Michelson hopes that her time with the Techbridge girls will show that her route could also be theirs. “I want them to know that whatever path they choose to take, they have the power to — by experimentation and by engaging with our world and thinking creatively — learn a great deal about these technologies they use every day and become more powerful,” she said. “How could you possibly get a job at Google if you didn’t start with a dream?”

The fact that Ebony shows up to Techbridge week after week on her own volition is an encouraging sign to Ozigbo.

“She’s coming every week, finding some sort of acceptance or community or fun in here,” she said. “Once these girls get that satisfaction from completing that kit, or making that soldering ornament and knowing they can do something that most people aren’t given the chance to do, that most adults don’t know how to do or don’t know about, that knowledge in itself is so empowering and can really take them places.”

As part of the PBS American Graduate Program, I produced a segment for the PBS NewsHour on Ebony Green and Techbridge with correspondent Spencer Michels. Here’s the segment: