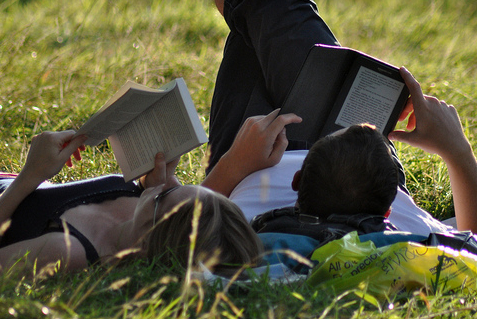 Photo by "Megan Trace via Flickr":http://www.flickr.com/photos/megantrace/6201381800/ and used with Creative Commons license.

For many self-published authors, a traditional publisher is an elusive dream. It means a team of professionals taking over marketing, advertising, publicity and the mechanics of publishing one’s own book on paper and electronically. It means already forged relationships with booksellers, critics and other writers — and it means more time to write, rather than haggling over the costs of a book cover design or editing.

While both the self-published fantasy writer Amanda Hocking and CIA thriller author John Locke show that independent authors can succeed in attracting big publishers and contracts, it seems, for now, that they are the exception, not the rule.

"I don't know of any publisher who would be willing to put out bad stories because their authors are a whiz at promotion." -John Hartness

using the Kindle Store as a talent pool

The rise of e-books and self publishing has certainly enlarged the talent pool for publishers and made it easier to find authors, but that doesn’t mean publishers are all taking advantage of the emerging talent.

Debra Dixon, president of Bell Bridge Books, a small press based in Memphis that publishes young adult, science fiction and fantasy titles, said, “I know that we have seen agents trolling Kindle lists … But our authors tend to come to us based on reputation.”

“I know a lot of folks in the industry, and I just don’t hear anybody saying, ‘I got the greatest author this week — got her on Kindle,’” Dixon said.

Trina MacDonald, a senior acquisitions editor for Pearson Education, said she discovers authors by finding experts in the field, doing research, and hearing from people in the community. “We ask what types of books they would like to see and who would write them,” she said. “And then we would make direct contact.”

MacDonald said she has heard of publishers contacting writers on Kindle and isn’t against the idea.

“I have not approached any authors, but I think it would depend on the book and the author,” MacDonald said. “But if they are already self-published you can see what kind of writing they’re capable of.”

The Truth About Amanda Hocking

Amanda Hocking, a 27-year-old independent author who sold more than a million copies of her books, signed a reported $2 million-plus, four-book deal with St. Martin’s Press earlier this year, making her an indie success story. The news of her book deal flooded the Internet, sparking reports that publishers are looking for the next Hocking.

But Hocking wasn’t a passive participant in the process. She sent numerous queries, manuscripts and book proposals to traditional publishers and agents, only to be turned down repeatedly. Hocking was also a prolific author with nine self-published titles to her name and her popular Trylle Trilogy, had already been optioned for a motion picture. According to her blog, she even had an editor, cover artist and acted on feedback from publishers and agents. By the time she was offered a contract by St. Martin’s she had negotiated foreign language rights in Hungary and sold 1 million copies of her books.

She said she chose to go with a traditional publisher because, “I want to be a writer. I do not want to spend 40 hours a week handling emails, formatting covers, finding editors, etc. Right now, being me is a full-time corporation.”

The new independent author has to be able to market and advertise a book in nontraditional ways on a minuscule budget. That usually means blogs, social media sites such as Twitter and Facebook, and a lot of phone calls and email. That publicity, often called “discoverability” or a “platform,” is what sells books and propels them up the e-book bestseller lists. And for most self-published e-book authors, that means making their downloads available at the Amazon Kindle store.

Erica Sadun, an author who previously wrote technical manuals such as “The iOS 5 Developer’s Cookbook,” decided to work on an independent e-book to stay ahead of the technological curve.

“My friend Steve [Sande] and I were sick to pieces of the 101 days of production before books can get out,” she said from her Denver home. So she and Sande decided to pen a how-to for the iPhone 4S’s virtual assistant Siri, called “Talking to Siri” and had it out within two weeks of the iPhone 4S launch.

After selling well for six days, it was picked up by a publisher — as it turns out, Sadun’s own publisher Pearson wanted it for its Que imprint. “It isn’t the normal story,” Sadun said.

But Sadun’s story isn’t uncommon either. Several successful authors have started independently publishing for higher royalties or using it to test out new genres. One successful author who advocates and guides new Kindle authors into self-publishing e-books, J.A. Konrath, has had six books published by Hyperion since 2004.

But lacking a following or any exposure, unknown independent authors still have to garner interest however possible.

“When I began talking to publishers and eventually signed with Bell Bridge Books, they were as attracted to my stories as they were that I was media-savvy and self-promotions savvy,” Hartness said. “But I don’t know of any publisher who would be willing to put out bad stories because their authors are a whiz at promotion.”

Dixon signed Hartness in September, about two years after he uploaded his first independent e-book to the Kindle Store.

“We saw what he had done and his platform, which made it more attractive because when you relaunch an author it’s a big commitment,” Dixon said.

Traditional publishers do shoulder the price of editing, promotion and publicity, and they usually recoup those costs with higher asking prices than 99 cents or $2.99. With self-published authors, the costs for publishers are the same as for a new author. “We treat (the book) as if it has never been published,” Dixon said. “One of the strong reasons writers come to publishers is to elevate their book.”

While Hartness loves working with his publisher and the process, he continues to self-publish his own work. “I think you are going to see many more hybrid authors,” he said.