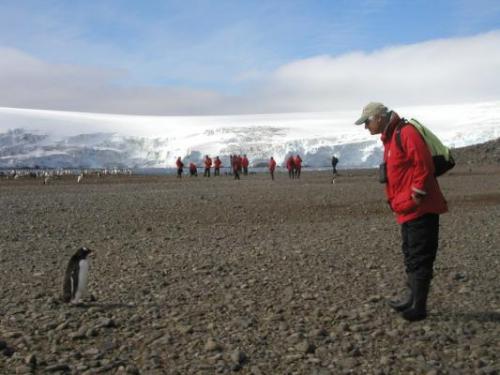 Science and Nature won't have a monopoly the way they have in the past. I think we are getting a wider array of science findings being translated into the popular press." - Steve Running

In his lab, scientist and Nobel prize winner Steve Running focuses on creating and confirming new facts and knowledge about climate change. Running leads the Numerical Terradynamic Simulation Group lab at the University of Montana.

The lab works to understand and model how vegetation responds to climate change and how those changes in turn affect energy, water and carbon cycles. In 2007, Running shared the Nobel Peace Prize for his work as a lead author on the Intergovernmental Panel on Climate Change.

The new media universe, he feels, might adequately communicate facts, despite the declining number of journalists dedicated to the beat. But in the current haze of countless science blogs and websites, his money is still on old money: He trusts that authoritative science reporting will evolve based largely on reputations built in a traditional-media orbit.

In this question-and-answer session, Running shares his thoughts about how new media is changing the landscape for science news.

MediaShift: From where you sit, what is the most important change in the way science news is shared these days?

Dr. Steve Running: I think we’re getting a democratization of science information that’s healthy. The big two journals, Science and Nature, have had a select set of trusted journalists who get a paper in advance and write press reports on it. The minute the embargo is lifted, it floods the news wires with all the latest new science. Well, the other journals have figured this out, and I’m starting to see news from a variety of journals, some of them really technical, disciplinary journals, show up in my local newspaper.

Science and Nature won’t have a monopoly the way they have in the past. I think we are getting a wider array of science findings being translated into the popular press. I think that’s good.

People are also seeing journal articles faster. What some of the journals are doing now is, the minute your paper has passed peer review and been accepted, they post it online. A story can still be in the print queue for months, but once they’re posted electronically, they are open to the public. Whether journalists are watching these, I don’t know. That suggests that this embargo game is going to fall apart.

The flip side of it, though, is quality control. I’m also seeing some of these journal studies coming out before a paper goes through peer review. There’s certainly the potential for quality control to unravel.

SR: I think as a forum for discussion blogs are probably faster and way more interactive than old-time journalism. I don’t like the idea of original research coming out in that way because of the peer review issue. What makes peer review work is a whole system where people’s credibility has been vetted over the years by their performance. There’s no way to shortcut it. Peer review can go wrong, but it’s the best quality control for facts we’ve ever found and the blogosphere just doesn’t have it.

If the host of a blog is a leading expert in a field, they might very carefully screen what’s posted. I imagine through time the best blogs will emerge as the best at least in part because of that kind of quality control. The lesser blogs will just be the chattering masses, with factual basis being optional in too many cases.

MS: The flip side of blogs, in a way, are websites devoted to presenting original research to a general audience directly through a university’s press office. I’m thinking of sites such as Futurity.org, which features stories written from press releases from some 60 universities. It cuts out the journalist middleman. No new reporting is done, though a release might be rewritten to make it more engaging. Is that a good thing? Does something go missing when that journalist is cut out, or does it simply speed the release of new research?

SR: If the university’s news and publication office people are competent it could be that it works just fine. I see it all the time now that journalists don’t rewrite a thing. They’ll summarize the exact same text as the press release. It’s possible that this really is a migration of science journalism from the newspaper to university press offices. And that might be just fine, might even be better if the university has more incentive to make sure they get the science right. As a publishing scientist, that’s at least neutral, and it might even be beneficial. Of course, then the burden of quality control ends up resting in the university’s press office, and they’d better get it right or else garbage goes out the door.

video as a translator

MS: Some people feel video is a game changer for science communication. How do you feel about that?

SR: Yes! NOAA has a climate change website now they just started. It features real scientists posted in 3- to 5-minute YouTube-style clips, in which they summarize: what their science is about; why they’re all excited about it; what they’ve found; and why it matters. And it’s from the scientists themselves. I think that’s really effective. You hear the passion in their voice about why they think this matters, rather than just some dry text on a page. I think it fits so well with the YouTube generation of people sitting around with their iPhones and they have a few spare minutes and can watch a little clip that’s interesting. The scientists have to learn how to do them right. Once they get them right, I really like that form.

MS: What you’re describing is the importance of the scientist turned scientist communicator. Do you welcome that? You do a tremendous amount of outreach, more than a lot of scientists do. How do you feel about being in charge of your own communications? How do think your peers feel about it?

SR: I think it’s not going to be necessary for everybody. I’ve seen plenty of scientists that would be just awful at it unless they worked really hard at it. It’s an interesting question of how much that becomes a criteria for hiring. Somebody that can do a five-minute science video in front of a camera, that’s good. It is part of their ability to teach well. In a way, it measures most of the same thing. How do you simplify the details down so people can follow it? And how do you explain why it really matters? That is where most young scientists really crater.

MS: In this day of rapidly changing journalism, do people understand science news in a way that satisfies you?

SR: A lot of these trends are going the right way. Material is going out quicker. It’s coming out from a wider variety of sources. I see those sorts of things as steps ahead of where we were in the past. I think maybe responsibility has fallen off at the newspaper level, and there’s more at the university press office level and at the government science agency level. I think in this electronic age every science press agency has to have a very credible science news publication division, and that might be where the science journalism jobs are these day, not at the magazines and newspapers of the past.

MS: Do you worry that will politicize science news?

SR: It could, but that could happen anywhere. Where the science journalist is employed doesn’t guarantee the science won’t be politicized. I’ve thought a lot about quality control and the need to filter what’s credible and what’s not. How do you decide whether to trust a website or not?

Sometimes, you respect an individual by name, so there’s trust on an individual level. But more often, it’s trust based on the history of that institution, whether it’s a university, The New York Times or some society’s journal. That’s how we implicitly determine our trust in a lot of this scientific information. So when I try to think through into the future, I guess I see the extension of the reputations our institutions, over the decades, have gained. That reputation ends up being a really big deal in deciding that I’m going to believe what they say on their website. I’m going to be lot more suspicious of these other websites that have no track record.

MS: I was talking to a biologist who complained that people think of science as some kind of a religion where you have a choice in what you believe. People, she complained, don’t get that there’s a process, and they don’t trust the outcome. She was so frustrated by this. That’s part of this question about the trust of institutions and the developing new media, isn’t it? Trust in science.

SR: There’s certainly a lot of that going on. What’s particularly puzzling to all of us as scientists is this idea that facts are optional. We think that the foundation of the analysis of every issue should be the facts and logic around the topic, and then you read these casual discounting of the facts and stated beliefs with no basis. I guess it suggests that some people are just willing to live in a logic-free world. I think that will get us in trouble at some point — that’s for sure. There are some facts you ignore at your peril.