How Non-Profit, For-Profit Newsrooms Are Working Together 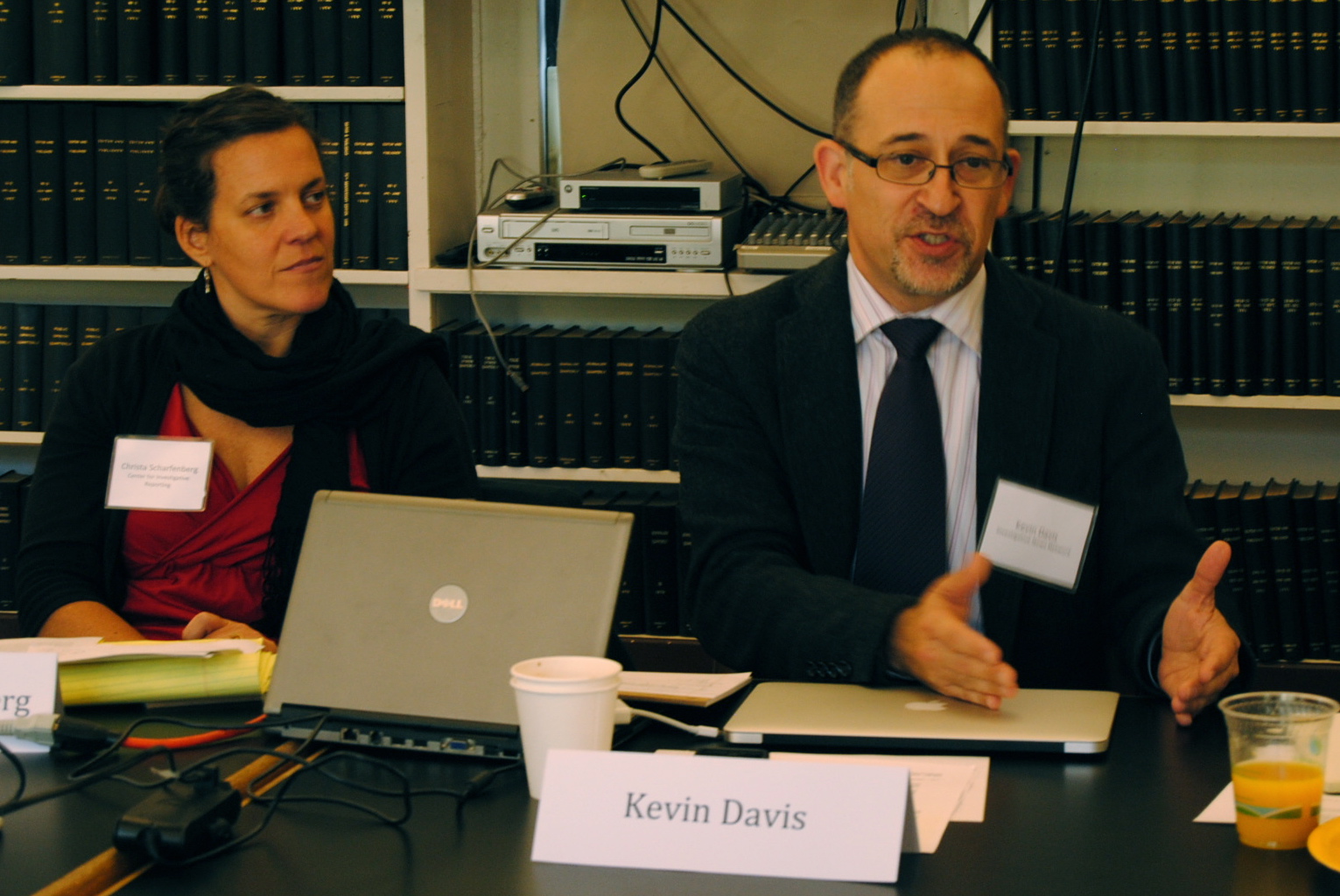 BERKELEY, CALIF. — As traditional newsrooms shrink and budgets tighten, media outlets have realized they can’t do as much investigative, time-intensive reporting. But one solution has been for competing news outlets to begin collaborating, whether working together on reports or with content-sharing deals.

And with the rise of local non-profit watchdog sites such as Voice of San Diego and the St. Louis Beacon, there’s more chances than ever for collaboration to happen between non-profit sites and for-profit mainstream media outlets. That was the subject of a recent roundtable discussion convened by the Investigative Reporting Program (IRP) at the UC Berkeley Graduate School of Journalism, and led by the IRP’s leader, Lowell Bergman, as well as Matt Isaacs and Haleh Hatami. The roundtable was funded by a grant from the Knight Foundation.

"Journalists often write about the issues they find interesting. That's very different than taking market needs into account...We have to move from the experimental into actually being businesses." -Kevin Davis

(Full disclosure: The IRP and MediaShift are working together on a new website, Collaboration Central, to be launched in February. MediaShift also has a long-running grant from the Knight Foundation.)

At the roundtable, representatives from the non-profit news industry came together with local for-profit media gurus from the San Francisco Chronicle, the Bay Area News Group and the Sacramento Press to discuss collaboration, funding, and how people with money can work best with the people without it.

Steven Waldman, who authored a recent Federal Communications Commission report, “Information Needs of the Community,” put it this way: “We know with depressing precision how much we lose on accountability journalism. Stuff that takes six months to produce will not make you money.”

Lowell Bergman kicked off the event Tuesday, talking about how much growth he’s seen in collaboration since he first got into news.

In discussing a project Frontline is working on with PBS, the Guardian and the CBC, Bergman said, “Because we’re sharing resources we’re actually able to do a lot more reporting and shooting that we couldn’t have done on a normal Frontline budget, so there’s obviously economic incentives.”

Waldman talked about how in the days of the newspaper, sections like horoscopes and classifieds were subsidizing the reporting, but people didn’t think of it like that.

“Part of what has changed is that we unfortunately have really good metrics now,” he said.

There are other changes too, Waldman continued. “One is the notion of news and particularly accountability reporting as a public good — the sort of reporting that might not be monetizable. In North Carolina, the paper down there spent six months doing an investigative series on the parole system, found all sorts of problems, people being let out, killing other folks … There are probably people walking around in Raleigh, Durham not dead because of this series. The benefits to the community were there regardless of who read the paper, and that kind of is the nut of the problem and why you have the breakdown of the bundle.”

The Value of Collaborating

Kevin Davis, CEO of Investigative News Network, works with many of their 60 member organizations to write business plans, figure out financing, and negotiate collaborations. “We see collaboration as currency,” he said.

Besides having a business plan, Davis has other suggestions for non-profits. “Journalists often write about the issues they find interesting,” he said. “That’s very different than taking market needs into account … We have to move as a movement from the experimental into actually being businesses.”

Jo Ellen Green Kaiser from the Media Consortium had a different view.

Most of the organizations in the Media Consortium are donor- or member-driven, and focus on appealing to that base.

“We don’t want eyeballs; we want people who became engaged actors,” Kaiser said. “We would rather have one person who takes action than 10,000 who just read the story. It’s a whole different way of thinking about what we’re doing and how we’re relating to viewers.”

As the group moved into sharing how they’ve collaborated, Mary Walter-Brown from the Voice of San Diego spoke about their partnership with the local NBC TV affiliate.

“You really need to know what you want out of the collaboration before you go into it. When our relationship evolved it was very organic — they started bringing us on as experts, and we’d talk about a story we covered. So it was really about awareness for us, getting our name out there,” she said.

“It’s still a struggle to get them not just to direct people to our website but to help them explain that we’re a non-profit and that we’re able to do these investigative reports because we have members and helping them explain our mission,” she added. “They can still steamroll you quite a bit, so you need to know and have a structured idea of what you want in the partnership.”

Lisa Frazier, CEO of the non-profit Bay Citizen, shared some of her knowledge on how to avoid getting steamrolled. She said when she first approached the New York Times in 2009, the paper wanted the Bay Citizen to pay the Times to contribute content, but she changed their mindset.

“We didn’t try to kind of sweet talk them and say we’re going to try to get to know them, because we’re going to get squashed,” Frazier said. “We were extraordinarily confident. We just came from an unmet need. They wanted to do something in the local space, and we wanted to have broader brand recognition for our newsroom.”

Frazier said every organization’s business model has to be different.

“You have to decide both financially and in tangible ways, what do you want out of this relationship? I do not deal with organizations that will not talk turkey and will not get things on paper,” she said.

In terms of negotiation, Christa Scharfenberg, with the non-profit Center for Investigative Reporting, said the organization is trying to diversify from just foundation support and recently completed a business plan that involved ideas for partnerships. A consultant reviewed the plan and said something Scharfenberg can’t get out of her head.

“He used an interesting metaphor of a vitamin versus a painkiller. Right now you’re offering these news outlets a vitamin. They might like it, but they can live without it. You need to give them a painkiller,” she said. “It’s helping both organizations, and it’s a longer-term strategy.”

Scharfenberg shared how CIR works with for-profit partners like the San Francisco Chronicle, the L.A. Times, Washington Post, and many more. They have a California Watch Media Network, and outlets pay an annual fee based on their circulation and, in turn, get stories.

“I think the No. 1 reason that’s made us attractive to for-profits is we’re filling a real need — investigative content. So we’re feeding a niche for sure. Our editors and reporters and producers are respected. Most of them are known entities or have a track record,” she said.

Chronicle editor Ward Bushee is pleased with his relationship with CIR.

“What I think Cal Watch has done is connecting really well with the newsrooms,” Bushee said. “We also like the fact that we get some exclusivity. Expectations set up from the very beginning have been a critical thing.”

Mark Glaser from MediaShift talked about the Texas Tribune based on a conversation he had with CEO Evan Smith. The Tribune has a similar partnership as the Bay Citizen with the New York Times. They make money through donations, foundations, underwriting and holding events, Glaser said.

Glaser said Smith’s take is, “It’s about reach and he uses that reach to justify what he’s getting from foundations. He’s going to foundations and saying, ‘This is my reach. Your money is helping our journalism get out.’”

A quote Glaser repeated from Smith about collaboration: “We’re going to either hang separately or survive together.”

The Chronicle’s Bushee chimed back into the conversation, offering an idea for how to make collaboration just a little easier.

“We deal with a number of different organizations now — each one involves conversation,” he said. “If there were some way to get it all into one bundle where a news organization could get their arms around it in an easy digital way, it would be a great service.”

Investigative News Network’s Davis jumped in. “That’s what we’re trying to do,” he said. “That kind of feedback means we need to do a better job of it.”

Bushee said they are willing to look into content from other organizations. “The trouble is what we pay probably comes nowhere near the cost of what it takes to do the story,” he said. “Most editors are open to ideas that give fresh looks to things.”

Carrie Lozano from IRP talked about the benefits of having an outside reporter able to burn bridges in local communities. “There’s been a belief over time that if you’re the local reporter you’re going to get the story. But you have to maintain some relationships with your sources because this is your beat.”

Martin Reynolds, an editor with the Bay Area News Group, liked that idea.

“There’s certain areas of coverage we don’t do much of now,” Reynolds said. “It could be of significant value and may even be a great sell because it could meet the daily needs of a news organization.”

The roundtable ended talking about membership and individual donors.

“One of the reasons I’m so focused on the small-donor model is it does affect the quality of the reporting we do,” Michael Stoll with the non-profit SF Public Press said. “We feel like we’re more focused on the needs of average people rather than the needs of the one-tenth of one percent who fund these non-profits. If you have a really strong message and really strong brand, you can sell anything to anybody in terms of grassroots donations. If you don’t have a strong brand, your organization fails.”

Walter-Brown from Voice of San Diego noted how important it is to talk to their readers about how the organization can thrive.

“Everybody loves what we’re doing, and they value us, but they didn’t realize what we need from them,” she said. “They didn’t realize they had a role in helping us achieve our mission. You have to ask somebody before they donate — we need to engage with a purpose.”

Hadley Robinson is a second-year student at the UC Berkeley School of Journalism. Hadley landed in San Francisco three years ago directly from Michigan, where she was the managing editor of Up North Publications, a group of local weekly newspapers. Originally learning the journalism trade at the University of California – Santa Cruz, she sharpened her reporting skills as a staff writer for a small newspaper in central Massachusetts. Hadley spent her first year at UC Berkeley graduate school writing for the school’s hyper-local site Mission Local, where she’s now an assistant editor. She spent last summer interning with the Bay Citizen in San Francisco.