Can 35,000 People Learn Anything from an Online Class? 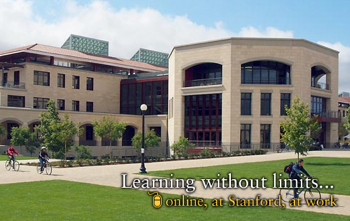 This summer, Stanford University announced its plans to make three of its introductory computer science classes available for free to the general public. The classes — Machine Learning, Introduction to Databases, and Introduction to Artificial Intelligence
— were to be taught by Stanford faculty and held online in conjunction with the regular on-campus courses held during this October-December term.

Those participating in the online versions were able to take (almost) that same class as the enrolled Stanford students, and the online students were given the option to take an easier version too, one that didn’t require completing the homework or taking the quizzes. Those who successfully completed the courses won’t receive grades or credit but will receive a signed “statement of accomplishment” from the professors.

"The three mass courses offered by Stanford are, by definition, far too large in scale for there to be anything other than superficial interaction between students and teachers." -Seb Schmoller
ADVERTISEMENT

The news of Stanford’s online experiment generated an immense amount of interest, with more than 130,000 signing up for the A.I. class and roughly 50,000 registering for the Machine Learning and Databases classes. Now that the term is in full swing, those numbers have dropped off substantially. Even so, some 35,000 students turned in the first three weeks of homework assignments, reported EdSurge in its newsletter, joining the 175 Stanford students taking the class on campus.

Managing a class of that size is almost unimaginable. Even so, professors Peter Norvig and Sebastian Thrun held office last month via a Google Hangout. That, too, was a bit oversubscribed, and even with the ability now to watch Hangouts live via YouTube, some people were not able to attend.

For their part, students seem to have a mixed reaction to the different classes. Some seem to prefer the style of the Machine Learning over the Artificial Intelligence course, for example, because the former is better designed, moves from easy to difficult subject matter, and requires hands-on programming assignments. (It’s interesting to note here that the Machine Learning and Databases classes are regular School of Engineering courses, whereas the A.I. class is a partnership between Stanford and a startup called Know It.) Of course, the differences in opinion aren’t that surprising; you’ll find students in any class react differently to the content and instruction. When a class has 35,000 students, there are bound to be differences of opinion.

Seb Schmoller, who is taking the A.I. class, has been documenting his experiences on his blog and also has a longer write-up of “what we can learn“ from the experiment on ALT News Online. He argues there are several key themes that educators (and not just those in the Stanford Engineering  School) should be looking at: the willingness for “world-class” teachers at “world-class” schools to give away courses for free; knowledge about how to operate classes at such a massive scale — technologically as well as pedagogically; data about how people interact with content and with each other in these massive informal learning settings.

“The three mass courses offered by Stanford are, by definition, far
too large in scale for there to be anything other than superficial interaction between students and teachers,” says Schmoller. “But, if the A.I. course is anything to go by, what Stanford University has solved, with its short, quirky and quiz-laden videos, is a way to give learners the feeling that they are receiving personal tuition, with plenty of scope alongside this for peer interaction.”

What’s also interesting to see is the amount of community that’s built up around these courses. Participants have created special Google+ Circles containing enrolled students. They’ve posted homework help to sites like Hacker News. And when the adaptive learning startup Grockit developed a new tool that enables real-time Q&A for online videos, one of the first-use cases was for the A.I. course materials, letting students point to specific places in the lectures where things were unclear and turn to others for better explanations.

All of this seems to point to a very interesting future for these sorts of massive online classes.