Truth and Contradictions: The Global News Industry Looks to the Future 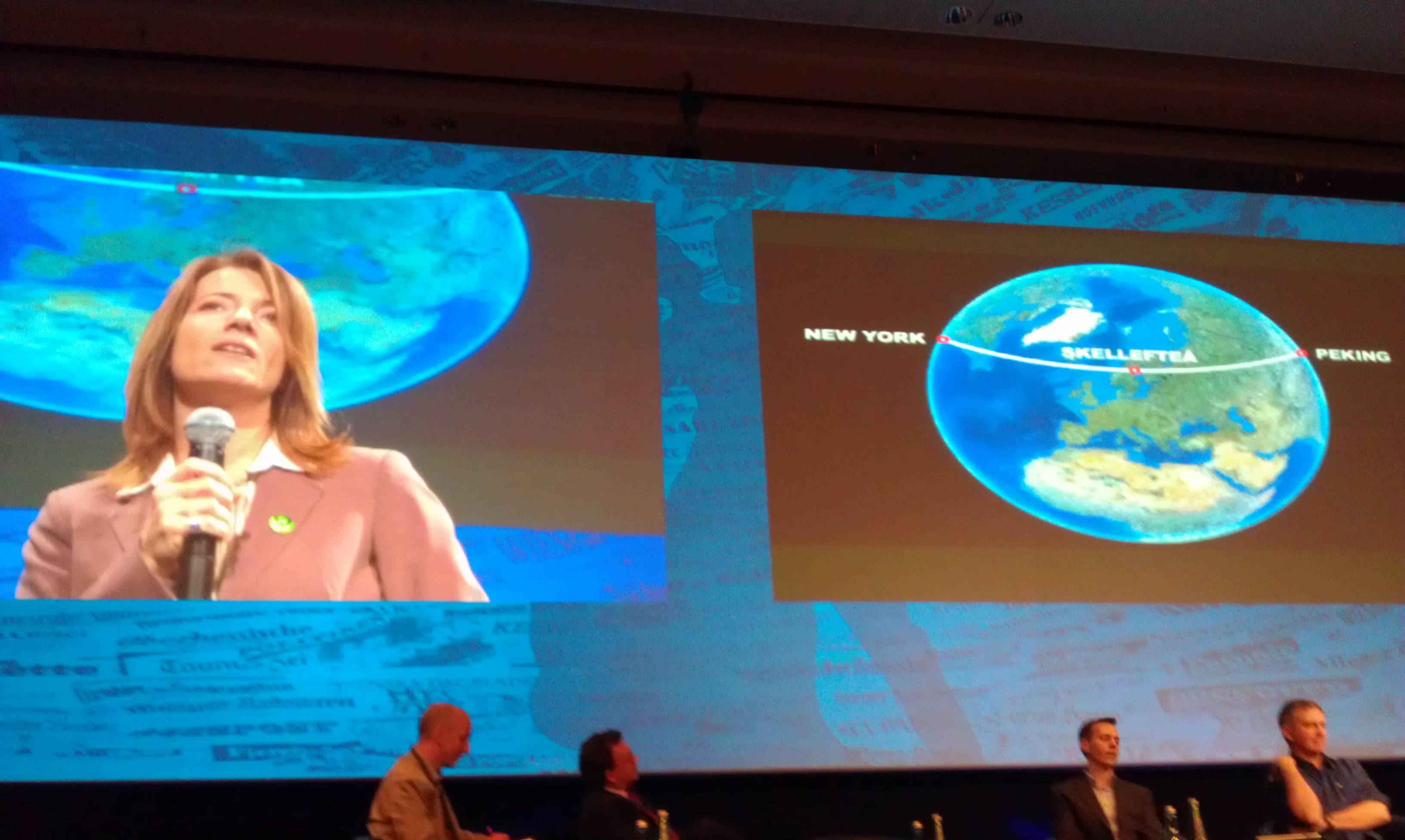 Anette Novak, editor of Sweden's Norran, illustrates her paper's place in the world at the World Association of Newspapers congress in Vienna. Photo by Anne Nelson

In recent years, the global news industry has been battered by the double tsunami of the economic downturn and technological disruption, as managers of newspapers and magazines struggle to integrate digital media into their business models. Now, over the past two years, the tablet and the smartphone have appeared, promising to again rewrite the relationship between digital distribution and content production. But the problem is that no one knows exactly how, giving news managers yet another set of challenges.

In October, I had two unusual opportunities to hear international news executives discuss the industry’s future, first, at the World Association of Newspapers congress in Vienna (where I was presenting), and second, at the Transatlantic Workshop in Digital Media at Columbia University. The two gatherings offered some provocative insights (some of them contradictory) as to where news is headed.

"Internet ad revenue overtakes newspaper in the U.S. this year and in Europe in the near future." -World Association of Newspapers CEO Christoph Riess

News organizations are investing heavily in online platforms, but for the most part this hasn’t paid off in revenues. Nobody has figured out a magic formula for online advertising (and managers are now expressing the fear that there may not be one). News organizations’ online ad revenues are growing, but at a slower pace than expected. Furthermore, online ad rates have dropped dramatically since their advent, and print ads bring in many times higher rates than their online equivalents. So in the vast majority of current cases, online advertising can at best complement print revenues and enhance the brand. Christoph Keese, an executive for German publishing giant Axel Springer, told the Columbia audience, “When you reach No. 1 online, you make a 10th of what you make as No. 1 in print.”

This perspective was reinforced in the report I presented in Vienna, “Financially Viable Media in Emerging and Developing Markets.” (Our research was commissioned by SIDA, the Swedish development agency, and drew on a global survey of World Association of Newspapers editors and publishers and leading newspaper executives.) Although all of the respondents were producing online content, they reported that less than 10 percent of their revenues resulted from their online operations.

Many of the international executives were watching The New York Times’ online experiments with particular interest, especially the paper’s decision to erect a paywall earlier this year. After many rocky quarterly returns, the Times posted a profit in the third quarter of 2011. But this gain was ephemeral, largely based on a combination of cutbacks and the sale of assets (such as its stake in the Fenway Sports Group). Despite the Times’ strong circulation figures, both print advertising and online revenue fell. Digital newspaper advertising showed modest gains, but About.com, the company’s web platform, has been faring poorly, losing ground to Google.

However, the news industry does not behave the same everywhere, and it’s unwise to extrapolate from the U.S. experience — which, in some respects, represents the worst-case scenario. World Association of Newspapers CEO Christoph Riess reported that newspaper advertising is still growing in Latin America (at 6 percent) and Asia (at 3 percent). However, he added, “Internet ad revenue overtakes newspaper in the U.S. this year and in Europe in the near future.”

The hidden footnote is that U.S. newspapers are struggling with other underlying problems, due in part to the pressures of public ownership. These include heavy debt loads (Chicago Tribune), ill-advised acquisitions (New York Times), and reduced editorial quality (Los Angeles Times). Keese pointed out that much of the German news industry is in better shape because most companies are privately held, not publicly traded, and more able to resist premature cost-cutting, layoffs and quality reduction.

There’s renewed scrutiny of Google’s role in disrupting the traditional news business. European news executives are keenly aware that in their part of the world, Google has won a near monopoly on search — though search markets vary wildly by region. In China, Google accounts for less than 20 percent of the search market, with nearly 80 percent going to Chinese giant Baidu. In the United States, roughly a quarter of the market goes to Microsoft and Yahoo, with Google accounting for the rest. But in Europe, Google’s share approaches 95 percent, provoking the ire of both Microsoft and European publishers. Keese holds that European media have been hurt by Google’s “tinkering with the placement of their own products,” such as placing Google maps at the top of its rankings. The European Union has gone on the offensive with an antitrust investigation, and a number of European news organizations have offered supporting arguments.

In Vienna, Stefan Tweraser, the head of Google Germany, took a defensive position, reassuring his audience that Google, as one of “160 search engines globally,” only accounted for “a small percentage” of the $500 billion global ad market. Furthermore, he said, “in 2010, Google paid $6 billion for content around the world.” Google wanted to partner with news organizations, since “Google is not in the news publishing business.” Nonetheless, there’s no doubt that the current structure of the online market heavily favors Google as aggregator over news organizations as content providers.

In the meantime, most of the news managers agree that the key to the future is engagement, and there’s a growing consensus that more hits aren’t always better. The market has been too fixated on unique visitors; the new goal is loyalty. Bill Grueskin, formerly of the Wall Street Journal, made this point forcefully at Columbia. “Media companies have been trying to attract the largest audiences for their websites, but they can be hard to monetize.” It is the loyal, engaged readership that represents the greatest value for advertisers. Engaged readers return often, spend more time absorbing content, and identify more with the brand, and they tend to spend more time on print content than on websites

This balance has been altered by the recent advent of the tablet, whose adoption rate is breathtaking, as demonstrated in an online survey released in September. A Harris poll of 2,183 American adults showed that the percentage who used an e-reader rose to 15 percent from 8 percent over the past year, with an additional 25 percent planning to acquire one in the near future. Publishers are seeing early indications that loyal readers don’t necessarily abandon print editions for tablets, but use them in combination, reinforcing the value. Furthermore, while computer users expect to get their content for free, it appears that tablet users will be more amenable to paying for apps and content streams.

That said, the publishers in Vienna were warned not to regard tablets as a panacea. Although they have been touted as a platform for magazines, the early circulation numbers are modest and ephemeral. (Wired magazine’s iPad launch readership of 100,000 in June 2010 dropped to 25,000 by January 2011.) Why? As brand consultant Mark Brill points out, much of the tablet pricing is high, and print still has advantages: “It’s high res, highly portable, very robust, and the batteries do not run out.” Likewise, at this point, smartphones are fine for bursts of data updates such as Twitter feeds, market reports and sports scores, but early studies indicate that users are unlikely to absorb full news accounts on mobile platforms.

But the technology and the audiences are anything but static, and it’s clear that the age of experimentation has only begun. For example: In Vienna, Mark Johnson, The Economist’s social media editor, reported that the publication’s social networks generate 10 percent of its web traffic, up three times since last year and 12 times from when they started 18 month ago. The Economist is now active on five social platforms — Facebook, Twitter, Tumblr, YouTube and LinkedIn — all of which send traffic to Economist.com. Johnson reinforced the message of engagement, especially through social media.

“In a given month, community contributors view six times more pages than average visitors,” Johnson said. The brand is further enhanced through face-to-face cultivation, via executive conferences and seminars.

The mix may be unusual, but it’s working, partly because such a high percentage of The Economist’s engaged audience is in the coveted $100,000-plus income bracket. Defying the grim trends in British print journalism, last year The Economist’s circulation grew 4 percent, profits rose 10 percent, and advertising was up 15 percent.

But The Economist is the anomaly. The World Association of Newspapers’ Riess warned that overall, print journalism is declining 2 percent a year, and it’s “structural, not cyclical.” Furthermore, the industry will be highly susceptible to the economic turbulence on the horizon. The gloomiest prognosticator in Vienna was Gregor Waller, former newspaper executive and founding director of Digital Age Consulting. He predicted that 2012 would bring a double-dip monster recession that would result in a “second wave of death” in the U.S. newspaper market, and the “first wave of death” for its European counterparts. “The worst year will be the second year, 2013.” There will be survivors, he added — but the winners will be the ones with “a crystal-clear digital strategy.”

Waller’s apocalyptic outlook is far from universal, and no one should discount the industry’s ability to adapt to new circumstances. As Harvard business professor and author Clayton Christensen reminded us, disruptive technologies can make as well as break businesses. There is an ongoing demand for traditional news around the world, and now it’s up to the brightest minds in the business to identify the platforms and economic models that will best serve the public.