The Challenges of Using Kickstarter to Fund a New Novel 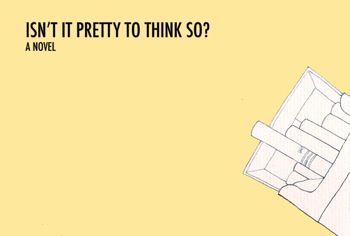 Kickstarter can't do everything, but it can certainly give a project a good start. Nick Miller's upcoming novel is a good example.

This post is a guest post in response to a MediaShift story by Simon Owens that detailed how one novelist bypassed a publisher to raise money on Kickstarter. In this case, things didn’t go quite the same way.

Chances are you’ve never heard of Nick Miller. He’s a writer, but you won’t be able to find his work in literary journals or inside bookstores. He’s neither featured in The New Yorker’s “20 Under 40” list nor won any prestigious literary prizes.

The purpose of a Kickstarter campaign isn't to turn a profit but instead to test demand. It answers the question: Will anyone even buy my product?"

Unknown and unpublished, Nick is a writer nonetheless.

And so agreed the 298 people who gave him nearly $12,000 earlier this year. For what purpose? A pledge on Kickstarter to receive a copy of his not-yet-written debut novel, “Isn’t It Pretty To Think So?“

I met Nick several years ago when we lived in the dorms at Berkeley. I discovered early on that he liked books. A lot. On several occasions, I caught him pulling paperbacks off his shelf and inhaling deeply into the books as he flipped through their pages. Nick majored in legal studies and minored in English, though I can’t recall ever seeing him attend any law classes. He once told me his father gave him a copy of “The Old Man and the Sea” when he was five and that it was his most prized possession. Literature clearly plays a big role in Nick’s life.

When I finished graduate school earlier this year, I found myself jobless but not yet desperate enough to seek permanent employment. I called Nick to catch up, and he said he’d written something that may be promising. For many years, he talked about wanting to write a novel but never really got around to it. Over the span of a three-day weekend, he said, he fervently banged out the first chapter to what he thought could be a novel. I volunteered to help contact literary agents and publishers on his behalf while he focused on writing. After all, I had the time.

One would expect big, haughty New York agents to ignore you, but that’s actually not the case. In fact, I received responses, or rather rejections, all within the first week. A demoralizing month of this made me realize that the traditional path to becoming a writer — agent, then publishing deal, then Oprah — was becoming rarer. Countless aspiring writers like Nick yearn to be signed by Andrew Wiley and handed seven-figure book deals. But as advances flow to a trickle and layoffs sweep major publishing houses, writers — even ones who are already published — must find new alternatives.

Kickstarter to the rescue

The January issue of Technology Review featured a story about two bloggers who raised $14,242 for a sex-themed book, “Coming & Crying,” on Kickstarter. They, too, were rejected by agents who said their book was unsellable. But still, they managed to attract more than 650 people to sponsor their project. I immediately signed up for an account.

Kickstarter did not invent the concept of crowdsourcing nor was it the first to model a business around crowdfunding. But where its service excels is in its ease-of-use and its large community of generous patrons. The company, founded in 2009, has raised more than $75 million for thousands of projects.

One of the first things you do when setting up a campaign is to specify how much money you want to raise and how long the campaign will run. After careful consideration, Nick and I chose $10,000, because it was a round-looking number, and 40 days because it would be a miracle if we pulled it off.

Next, you decide what rewards people get for making a pledge. Bundling is a common strategy used to increase not only the number of rewards but also to drive up the prices. For example, one could offer a novel for $15, but for $25, you get the novel plus a handwritten note. Or better yet, for $100 you get the novel, the note, and a personal phone call from the author. Kickstarter projects thrive on the ability to offer enticing, creative rewards.

For Nick’s campaign, we devised seven rewards ranging from $5 to $5,000. On the low end was a PDF version of the novel, and on the high end was everything below it — PDF, e-book, paperback, Moleskine notebook, two other novels, the unedited manuscript — and also Nick’s MacBook Pro. Unsurprisingly, no one made a pledge for the $5,000 laptop reward.

Because Nick had created a personal blog where, for the past two years, he posted short stories, an audience was already established, albeit a small one. He added the first chapter of his novel and, to our surprise, was featured on the Tumblr staff blog several weeks later. This much-welcomed spotlight brought with it a swath of new readers.

During the holidays, we wanted to thank his fans for their encouragement and support by giving away something. We decided on a Moleskine, Nick’s favorite brand of notebooks in which he wrote his ideas for the novel. A large Moleskine retails for $18.95, and we could have easily given away five. But we learned two valuable lessons: People love free things, and sometimes one can be greater than five. His blog post to give away a single red Moleskine notebook received more than 2,500 responses. To put this into perspective, John Mayer’s posts on Tumblr average about 1,000.

Nick continued to write and post new sections of his novel, even in their draft forms. Another friend, who worked on the Obama campaign, insisted we adopt a grassroots mentality by responding to every message, comment and email. So Nick did, and it took him hours. He also hosted live video chats on Justin.tv where readers could ask him questions. It certainly seemed narcissistic at the time to think that anyone would even want to video chat with him, and it took a lot of persuading on my end to get him on camera. (He was so nervous the first time that he had to drink half a bottle of wine beforehand.) But people did sign on to chat, and we learned the importance of audience engagement. Kickstarter added more fuel to the fire by featuring Nick’s campaign on its homepage.

And so after 40 long, restless days, we pulled off the impossible by exceeding our $10,000 goal. We felt like millionaires.

but does it pencil out?

The honeymoon, however, was short-lived. Right off the bat, Kickstarter takes a 5 percent fee. An additional 3-5 percent (depending on the amount raised) goes to Amazon because it powers the payment system for Kickstarter. Next come the people we had to hire: editors, copyeditors, proofreaders and designers. For a 300-page paperback with a beautiful matte cover, our printer charges about $4 per copy. And don’t forget about buying the other items for each reward bundle. The novel isn’t released yet, but after printing, packaging and shipping, the funds we raised will be gone and we’ll be put in the red.

Will Nick and I become the first Kickstarter alums to actually lose money on a successful campaign? Unlikely, it seems. The two bloggers who published “Coming & Crying” said they just broke even on their project. To imagine, all that work for naught.

In hindsight, our funding goal was clearly unrealistic (but at least it was a round-looking number, right?). Should we have tried to raise $20,000? Or maybe even $50,000? Because Kickstarter’s funding policy is all-or-nothing — you get the money only if you reach or exceed your goal — chances are any amount that allows for a profit would be unreachable for us.

Then, I looked up the definition of kickstart: [verb] to provide the initial impetus to.

The purpose of a Kickstarter campaign isn’t to turn a profit but instead to test demand. It answers the question: Will anyone even buy my product? If the answer is yes, then Kickstarter provides the initial boost, but it’s ultimately up to you to figure it out what to do afterward. Our experience has forced us to evaluate not only the quality of the writing, but also our ability to market and sell the book. We’ve learned that making money comes much later, when a workflow and infrastructure have been established to make the product accessible to the general public. Nick remains a writer, but I’ve essentially become his publisher.

The novel is slated for release early next year. The paperback is already available for pre-orders on Amazon, and sales from that have inched us closer to the black. We plan to release an electronic version that will be priced slightly lower, and despite my fondness for paper and independent bookstores, I think the Kindle e-book will outsell the print version by several orders of magnitude.

While the traditional publishing route still exists, other paths are being carved out by small companies like Kickstarter and not-so-small companies like Amazon. Writers, regardless of status, can now embrace a variety of tools and services that level the playing field. A part of me is almost glad that we were rejected because it’s certainly made the past year as interesting as it is challenging.

And so I hope, after all this is finally over, you will have heard of the writer Nick Miller.

Jesse Young is the founder of Fernando French Publishing, a small publishing imprint based in Berkeley. They will publish their first novel, Isn’t It Pretty To Think So?, in early 2012. Jesse studied engineering at UC Berkeley and journalism at Northwestern University.