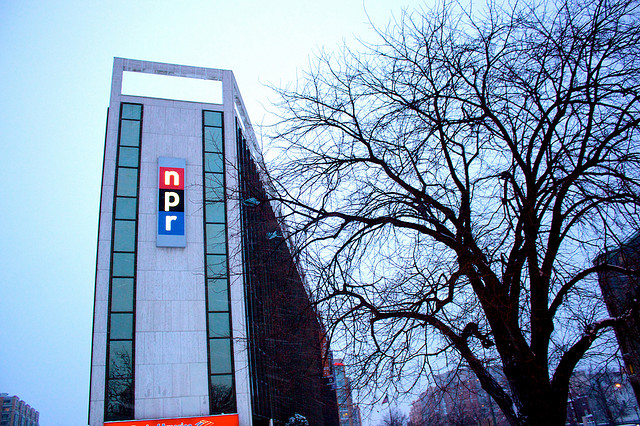 Photo by "Todd Huffman on Flickr":http://www.flickr.com/photos/oddwick/ and used here under Creative Commons license.

Knight should know. He’s had a long career in public broadcasting. Now, he is co-director of the Editorial Integrity for Public Media Project, a ground-breaking attempt to define public media’s principles for a digital age.

Is the difference between public and commercial media only the degree to which commercial factors play a role in their journalism? Or, is there a principled distinction?"

Leading public broadcasters, NPR, PBS, and many stations have been drawing up a new ethics charter. At their website, www.pmintegrity.com, the project posts its draft guidelines.

Recently, my ethics center and Wisconsin Public Radio and Television co-hosted an evaluation of the draft guidelines. The project is an ambitious example of what I call “integrated ethics,” the attempt to construct a new mixed media ethics.

Many other major news organizations are creating integrated ethics, from the BBC to the Canadian Association of Journalists. Within public media, there are many who believe that the future of citizen and government support rests on the successful articulation of what is distinctive and important about public media.

Why this urgency about trust and integrity?

One reason is recent high-profile controversies such as the firing of NPR analyst Juan Williams. More recently, we witnessed the confusing firing-but-then-retaining of NPR opera host Lisa Simeone. Simeone’s impartiality was questioned when she became a spokeswoman for Washington, D.C.-based Occupy Wall Street events.

The controversy has hurt public broadcasting in the public eye and in the purse. Politicians have threatened to end state funding; citizens have stopped their donations.

Another reason for the controversy is decreasing levels of state funding. This means that NPR, PBS, and others have to seek funding from, and to form partnerships with, a diverse range of groups in civic society. Many of these groups have political agendas and social causes to advance.

In a partisan public sphere, what happens to public broadcasting’s claim to impartiality when increasing amounts of its journalism is funded by such groups?

New editorial guidelines to maintain the public’s trust appear to be essential.

The integrity project aims to do at least three big things: define public media; create guidelines for accepting money; advise journalists on how frank they can be online.

We, the public media

Note that I use the term “public media.”

The integrity project uses this term to signal that, in a digital age, we need an understanding of public journalism that goes beyond traditional forms, such as radio and television. The idea of public journalism should include websites and bloggers, among others. But any conception will be contested.

The same complexity confronts the creation of adequate “firewalls” between journalists and funders. The project’s new guidelines discuss who not to take money from (e.g., extreme groups like the Klu Klux Klan), and under what conditions to use caution (e.g., when funders are likely be the subjects of news coverage). Also, the draft guidelines rely heavily on transparency about public journalism and the identity of its funders.

Yet transparency cannot, by itself, solve the problem of editorial integrity or fix the public’s poor opinion of their media. Transparent journalists can be biased, inaccurate or irresponsible. Good journalism also requires superior methods of investigation and verification that result in important stories. Trust is a combination of method and accountability. Moreover, how far does transparency go? Should newsrooms take money from groups that are not transparent about their own funding?

Am I saying the quest for integrity is a hopeless task? No. I am saying we must be realistic about the difficulties of integrated ethics.

Even if the integrity project does not have dramatic success in the short run, the effort will not be lost. It will provide a platform from which others can work.

It is praiseworthy that these journalists care so much about their craft. They are pioneers in reinventing media ethics.

I predict that within five years these ethical projects will produce a fairly clear picture of integrated ethics in a digital age. I suspect that we will have good examples of guidelines for the most troublesome areas, such as transparency and funding.

Let me finish with one last worrying thought.

Enthusiasts of new media may regard public media’s quest for integrity as an old-fashioned concern that is out of sync with our chaotic, interactive media world. As one participant at the evaluation meeting said: “I sometimes feel I am defending a form of journalism that is considered a dinosaur.”

I don’t think we are trying to save a dinosaur. Public media and mainstream media will continue to be a significant part of our media ecology for years to come. We still need newsrooms that care about standards of impartiality and verification, and the public trust.