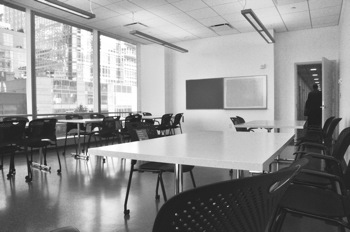 When students covered the opening of our college's new building, they were forced to choose between good light and no people and bad light and people. Ideally, they need both light and people -- particularly when they're still printing on news stock in black and white. Photo by Marisol Rueda.

... Although it's a bit clichéd, I believe that good writing is good writing -- online or off. And that errors and deficiencies are magnified exponentially on the web."

When I designed the curriculum for our college’s recently launched journalism minor, I included courses in nuts-and-bolts digital reporting, and in new media form and theory, but I kept my introductory news writing and editing class pretty old school, and even anachronistically scanned and posted photocopied handouts on news value, canned stories and lede assignments, and notes on story structure that dated from the 80s to Blackboard.

My reason for keeping this particular course traditional was twofold: My college’s administration is very committed to maintaining a print student newspaper, and, although it’s a bit clichéd, I believe that good writing is good writing — online or off — and that errors and deficiencies are magnified exponentially on the web. By emphasizing craft, and in teaching slippery concepts like news value and its relationship to story structure, I’m giving my students a solid foundation from which to blog, tweet and report across mediums.

However, this semester I’ve begun to introduce a bit of 21st, or late-20th century, technology into my news writing classes which I’ve subordinated to, and which complements, the teaching of writing.

Here are some strategies which are mediated, but not heavy-handed:

Transition from Blackboard to WordPress

A few years back, our college’s Blackboard installation crashed for the better part of the semester. Although it’s stable now, relying on it too much, or teaching an online class, is still potentially problematic. I’ve heard about colleagues teaching via blogs, or Facebook even, in recent years. And there’s a new application on Facebook that promises to meld the chatroom and the classroom. In the meantime, though, I’m using a private, dedicated WordPress site as a particularly journalism-appropriate alternative.

I created a basic hidden, password-protected WordPress site on my own server and set students up with usernames and passwords on the first day of the semester.

Students post story ideas, add links to similar or somehow instructive stories, and file their own articles to the site on deadline. They are always aware of what their peers are covering, and they’re beginning to write collectively, for an audience, versus for me, the professor. But the true power of a private WordPress site is that it gives students the ability to read and comment on each other’s drafts from off-campus in real time, even if their stories aren’t yet ready for primetime.

The site also familiarizes students with the platform that our college newspaper, The Sentinel, uses, and allows for newspaper editors to harvest potential stories from the site, while keeping in contact with writers in a manner that’s public and transparent. Blackboard is a nice tool for classroom management, and for distributing documents, but in a news writing class, I’d rather students spend their time working with an intuitive and field-specific interface.

I’ve invited a friend who is a photographer to visit and take students outside and off-campus for the sake of teaching them the basics of journalistic photography. Although many of our students are carrying multi-megapixel cameras around in their pockets, whether attached to their phones or not, they’re often unclear as to how to compose a news shot versus a snapshot for Facebook, and how bad indoor lighting conditions impact their pictures. They also don’t necessarily know how to choose good subjects.

When I was in college, we had to get the photographers to show up and shoot for us. This is because even those among us who were competent photographers often didn’t have our own SLRs (single-lens reflex cameras). Our students are technologically equipped, and we purchased some digital SLRs for the newspaper. So we can thankfully encourage students to think visually, and to be responsible for their own pictures as they’re conceiving their stories and reporting them.

An introductory student recently filed a fashion story for the newspaper that wouldn’t have worked in the old days on deadline. She “made over” some male students by taking them to the mall at Columbus Circle, dressing them up, and shooting the pictures herself. It’s a solid first attempt at a feature that would have been critiqued on Blackboard in the past, revised and graded. This semester, when another story fell through on deadline, the fact that the fashion story was clean, and visually exciting, made it a no-brainer for the editors at The Sentinel.

For years, I’ve wrapped up the introductory news writing class with a profile, which the students enjoy. My rationale was that students had worked hard over the course of the semester learning straight news ledes, the inverted pyramid, and how to set up quotes correctly.

I like to get them experimenting with narrative, and with descriptive language, and to practice showing versus telling, and a profile is typically a good way to do so. However, the profiles that come in often aren’t as good as what I’ve been reading from them all semester.

Students are tired by the end of November, and although they initially think that “creative writing” equals easier writing, they quickly come to terms with the fact that narrative is difficult to do well. This semester, I’m having them compose multimedia profiles in which they shoot pictures and conduct audio interviews, which they then edit down to compelling web-ready pieces.

This assignment teaches them a bit more in the way of tech skills in a comfortable environment, and it gives them high-quality results that they can be proud of. At the same time, it encourages them to make good edits, and to emphasize interviewing, because the story length is in minutes, not words, and is set in stone.

Borrow from poetry and the fine arts

Here’s an exercise I’ve adapted from poetry writing workshops that I ran in graduate school that involves a Phaidon Art Box full of postcards and centers on ekphrasis loosely defined. Students pull a card at random and write some narrative, or a rough outline of a poem, inspired by the picture on the card. Then they consider a poem like William Carlos Williams’ “The Great Figure“ and a related painting, such as Charles Demuth’s “I Saw The Figure 5 In Gold,” or W.H. Auden’s “Musee des Beaux Arts“ and Pieter Breughel’s “Landscape With The Fall of Icarus.”

Charles Demuth’s I Saw The Figure 5 In Gold

The purpose of this lesson, which was originally adapted from a freshman composition textbook, and a book of poetry writing exercises, is to get students to think about the often complicated relationship between text and art. Typically, their photos are headshots and empty classrooms or interior landscapes devoid of people. I want to get them to see that there are storytelling possibilities with pictures — and not just with moving pictures — and to consider that in addition to being boring, poorly conceived art often works against making meaning. If students are encouraged to think of photographs as enduring, and to consider formal issues as a fine artist might, then they’re bound to pay more attention to craft, and to begin to see art as important to their stories rather than ephemeral.

If I seem needlessly contrarian, or like I’d be happier teaching journalism on Gilligan’s Island, that’s not my intention. I want to reaffirm the idea that technology is a tool for content delivery, and that content is still very much written, regardless of how it’s delivered. Consequently, today’s journalism education requires balance both literal and conceptual, and dexterity of both thought and action. (As if to prove this point, I am typing this with my thumb on my iPhone on the subway. The student next to me is on his way to Fordham and reading contemporary Irish drama out of a book while manipulating his own iPhone awkwardly with his thumb.)