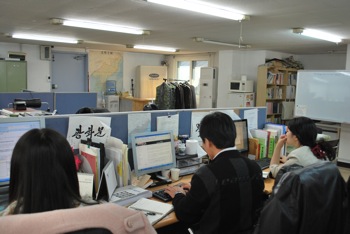 SEOUL, South Korea — “I am always worried about security for those who report information to us from inside,” said Byoung-Keun, a North Korean working in Seoul as a journalist for The DailyNK, a news website focused on telling the world what is happening in possibly the world’s most closed-off society.

Byoung-Keun is a pseudonym, because the former North Korean state official cannot divulge his real name to PBS MediaShift. Doing so could lead to reprisals for family and former colleagues living in North Korea, or even an assassination attempt on him in Seoul, if other recent reports about defectors being targeted by Pyongyang are true.

"Exile groups blended with South Korean aid groups, many of them with a fundamentalist Christian backing, are the best source of news." -Bob Dietz

In North Korea, Internet and cell phone use are restricted to senior government officials and foreigners — and then closely monitored. The only media is state-run, and for those interested in unwittingly funny triumphalism predicting the imminent collapse of western capitalism, then the Korean Central News Agency has it all. More seriously, however, punishment for North Koreans caught passing information outside ranges from imprisonment in the country’s gulags – which some estimates say hold a mind-boggling 200,000 political prisoners – to death. No wonder Byoung-Keun is concerned for those he talks to on the inside.

The drive to tell the story

He said he is driven by a desire to tell the wold what is going on in North Korea, “because no one else is doing it.” Byoung-Keun is one of two defectors working at DailyNK’s Seoul office, with three others based in China, communicating with North Korea from there. Northeastern China is home to an ethnic Korean minority, with an unknown number of North Korean migrants and asylum seekers in the area, and there is a growing formal and informal trade economy across the border into North Korea.

According to Bob Dietz, Asia coordinator with the Committee to Protect Journalists (CPJ), this region of China offers “the best watch” on North Korea. “Exile groups blended with South Korean aid groups, many of them with a fundamentalist Christian backing, are the best source of news and are a regular supply of intelligence for governments trying to get more information about conditions in North Korea,” he told MediaShift.

Some of these missionaries and activists are at the forefront not only of information gathering, but of assisting North Koreans who want to defect — like Byoung-Keun — by smuggling into China and then onward, overland to Mongolia or to southeast Asia, in the hope of eventually finding asylum and a new life in South Korea. Pastor Peter Jung told Mediashift that he and colleagues operate in the border area, but said he cannot give any details about how the “underground railroad” — the step-by-step system by which North Koreans defect — works. “It would be too dangerous to write too much detail about that,” he cautioned.

View from the South Korean side, across ‘The Bridge of No Return’ into North Korea, inside the demilitarized zone along the north-south border. Photo by Simon Roughneen.

Christopher Green is manager for International Affairs at DailyNK, and translates and edits Korean copy into English. He told me that the primary means of communication are Chinese cell phones, which work inside areas of North Korea close to the Chinese border. “If someone gets caught using one of these, they can rationalize by saying that they need the device to keep in touch with family living in China,” Green said.

And in the smuggle and barter economy dominant along the border areas, a bribe is usually needed to get the policeman to look the other way. Before he defected, Byoung-Keun smuggled medicinal herbs into China, by floating them inside tractor tire tubes across the Yalu River that marks the border between the two countries. He said the proceeds from this supported 28 people, who otherwise might have struggled to survive in North Korea’s stagnant economy.

Byoung-Keun is now applying that knack for improvisation and survivalist savvy to his journalism work in Seoul. Describing what at first glance appears to be a challenging operation, getting news out from North Korea, he said, “It is difficult, but not that difficult. We have our system, linking with our contacts on the inside, and that gets us what we need for a story.”

He said defector journalists keep their calls to three minutes at a time, to reduce the risk of surveillance. He said he is asked a lot about the apparent difficulties of reporting on his country, where on the rare occasions that foreign journalists are allowed in, they are kept to a Potemkin Village-style itinerary and shadowed by guides (i.e., surveillance) at all times.

However, even this limited methodology looks like it could be wound down, with a crackdown by state security agents presenting new security risks for undercover journalists. According to a story by another Seoul-based media group with an eye on the North, Open Radio for North Korea, the Pyongyang regime says anyone caught using a Chinese cell phone should be deemed a spy.

Eun Kyoung Kwon of Open Radio for North Korea told MediaShift there is a renewed drive to “crack down on anti-socialist behavior,” in the North Korean regime parlance. The back story is ongoing tensions between North Korea, and its wealthy, technologically advanced neighbor to the south — which is strongly backed by the United States, and a coming leadership change in Pyongyang.

Current leader Kim Jong Il is said to be ailing, with his third son Kim Jong Eun lined up to take over. In 2012, the country will hold lavish celebrations marking the centenary of the birth of Kim Il Sung, North Korea’s founding leader and Kim Jong Il’s father.

The succession and centenary should prompt renewed international media interest in North Korea, which is currently struggling with an under-reported food shortage and possible famine in some parts of the country. As the sole native English speaker at DailyNK, Green often fields requests from foreign journalists seeking the latest news on North Korea. “International coverage of North Korea is really quite limited and often sensationalized,” Green said. “Some publications tend to take whatever Kim Jong Il says at face value,” repeating the dictator’s bombastic and cartoonish threats and denunciations verbatim.