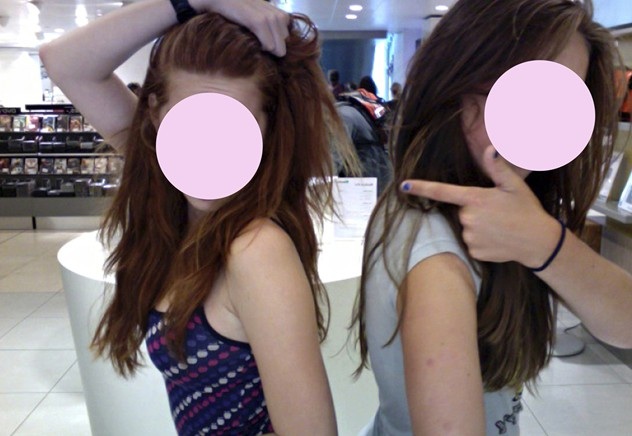 One of the images from Dutch artist Willem Popelier's 'Showroom Girls' exhibit at the Foam Museum in Amsterdam.

This past summer, Amsterdam’s Foam museum exhibited a controversial project by Dutch visual artist Willem Popelier — a project that has raised a debate about the intersection of the Internet, in particular social media, and privacy.

"As soon as we are on the Internet, we forget all that and can only think of one thing: exhibiting ourselves." -Willem Popelier

The two girls visited a shop where customers can take
pictures of themselves on computer webcams in the showroom. They ended up making 153 pictures and two video films of
themselves.

Around the same time, Popelier was doing
research on the various ways in which people use photography and
photographs in their everyday lives. He decided to use pictures taken on showroom webcams. Among the pictures he selected were those that the
two girls had taken.

One of the girls happened to wear a necklace with her name on it.
Through a simple search on Google, Popelier was able to find her and her
friend on various online social networks.

In the forum section of the Foam museum’s website called What’s Next,
Popelier presents himself as a
“dirty 28-year-old man, twice the girls’ age, who has been looking at
them and collecting their digital traces.”

What he found became his Showroom Girls project: “I only used information which is already out in
the open, ready to be found,” he said. The girls’ identities are
not revealed in the exhibition.

Referring to the girl with the necklace, Popelier said: “I exhibit
her pictures and messages from Twitter, but she remains anonymous. She
as a person is not directly traceable. Her face is not to be seen. When
she is using Twitter, her tweets are immediately covered by a shadow as
they are printed live out of a printer in the exhibition room so that
you can see that she tweets, but not what she tweets.”

Are we all conscious social media users?

The majority of the visitors at the exhibition, representing a mixed
group of men and women aged 20-55 from various social backgrounds, were
convinced the girls’ experience could not happen to them. “I would never make pictures of
myself in a public store and leave them there in public exposure,” one visitor said. “I
wouldn’t expose my profile to people I don’t know,” another said.

When asked, most visitors said they were aware of the risks they take
when they go online and use social media: “I’m very conscious of putting
personal information on the Internet,” a young student said.

They said they take the necessary precautions to preserve their
privacy.

Just a few people admitted to not being aware of the risks. “Social
media (hasn’t) exist(ed) that long. I don’t think we have realized what kind
of effect it has,” a woman in her early 30s said.

Some also said they consciously accept the risks involved because
they believe the opportunities offered by social media outmatch the
chances for their privacy to be violated. “What [the Internet] gives me
is more than what I stand to lose,” one person at the exhibit said. “There are certain risks and there
are certain opportunities.”

Popelier, however, is worried about the impact of the Internet on people’s lives. His main purpose in setting up the Showroom Girls
project was to visualize and emphasize how photography and social media are used today. “I want to show you this in a different way
than what you are used to. I want you to step out of your comfort zone
and look at familiar things in a new light. I hope this will give you a
new perspective on things you take for granted.”

Popelier takes this thought one step further. He assumes that people
enjoy exposing themselves. “Being noticed is something we all want or
need,” he said.

Some visitors at the exhibit agreed: “People love attention,” one said.

Furthermore, Popelier believes that people often expose themselves in
an obsessive way and become fascinated by their own face and image. He
calls this phenomenon “digital narcissism.”

For Carsten Rossi, a communication specialist at Kuhn, Kammann &
Kuhn, a corporate communications agency, “narcissism is an absolute prerequisite for managing your online
reputation successfully.”

Some social media users among the visitors shared Rossi’s opinion.
Engaging in social media lifts their self-esteem:
“It feels good when a picture of yours is ‘liked’ by others,” one said.

By seeking acknowledgement through social media, however, users
increase their public exposure. “If your online reputation is your main
benchmark for self-esteem, you will have a tendency to reveal more about
yourself than you normally would or is good for you,” Rossi said.

Popelier sees a paradox in this type of social behavior: “We don’t
want the state to control our every step and listen to every word we
say; we don’t want strangers in our homes and [we don’t] put curtains in
front of our windows. When talking to a stranger we don’t share our
intimate thoughts or our private life. But as soon as we are on the Internet, we forget all that and can only think of one thing: exhibiting
ourselves, marketing ourselves as nice, funny, great, good people.”

Some visitors at the exhibition, however, were more relaxed regarding
the topic of privacy and social media and defined exposure as “normal.”

“It is human,” a young man said. “We are social creatures … Since everybody is putting stuff out there, it’s not a big issue anymore. Privacy is already redundant.”

A woman in her late 20s said: “I don’t feel a picture reveals my
whole being. It’s not everything about me; it’s just what I look like.”

“There is no good or bad in (the) Internet,” Popelier said in the end. “It’s just there and we deal with it.”

The same applies for social media: It’s there and we deal with it.
The Internet and its applications, such as social media, are tools which we
can use in any way we like. It is clearly a matter of the choices we
make about how we want to use the medium. It’s similar to driving a
car: You can drive drunk and take all the risks that come with it or you
can drive safely.

In Rossi’s words, “The biggest damage is done to yourself by yourself.”

Efthymios Kotronias holds a Masters degree in European Communication
Studies from the University of Amsterdam, the Netherlands, and a
Bachelors degree in Media and Communications from Athens University,
Greece. Based in Amsterdam, he is making his first steps as a freelance
journalist as a writer for EJC’s online magazine and for the Dutch I Am Expat website. He is always looking forward to his next publication.

This is an edited version of a story originally published by the European Journalism Centre, an independent non-profit institute dedicated to the highest standards in journalism, primarily through the further training of journalists and media professionals. Follow @ejcnet for Twitter updates, here on Facebook and on the EJC Online Journalism Community.