Did Apple Collude with Publishers to Fix Prices on E-Books? 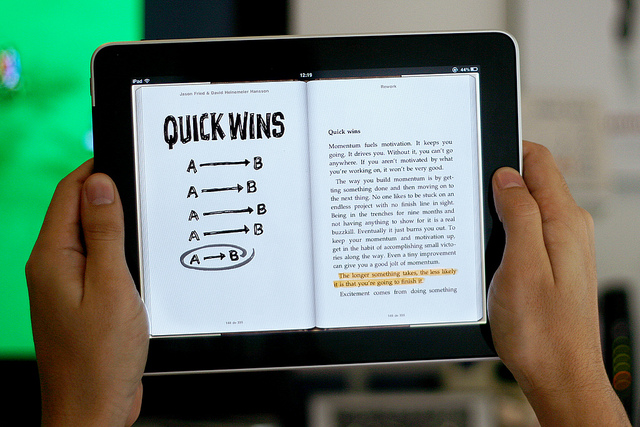 Apple’s iBookstore wields enough power to change how electronic books are sold and priced, according to plaintiffs in class-action suits against the Cupertino, Calif., company and several traditional publishers. The complaint alleges that Apple violated antitrust laws by colluding with publishers to keep e-book prices high.

Hagens Berman, a consumer rights class-action law firm, filed the original complaint in U.S. District Court in California in August alleging that Apple, HarperCollins, Hachette Book Group, Penguin Group, Simon & Schuster and MacMillan teamed up to force Amazon to raise its $9.99 e-book pricing to a new, and often more expensive, “agency model” where publishers set the price. The complaint also alleges that “Apple had strong incentives” to help the publishers because the Kindle is “a competitive threat to Apple’s business model,” according to court filings.

"It's difficult for the publishing industry to change over from the traditional model that it's developed over the centuries, and to adapt is really, really hard." -Robert Berring

“Fortunately for the publishers, they had a co-conspirator as terrified as they were over Amazon’s popularity and pricing structure, and that was Apple,” said Steve Berman, an attorney representing two consumers and the founding partner of Hagens Berman. “So instead of finding a way to out-compete Amazon, they decided to choke off competition through this anti-consumer scheme.”

The lawsuit seeks damages for e-book purchases, an injunction against pricing e-books with the agency model, and the forfeit of profits received by the defendants — which could total tens of millions of dollars.

The e-book market isn’t a huge one yet, but it definitely is a growth market now with the affordability of e-readers and widespread wireless networking. Only about 3 percent of adults even download e-books, but those who have e-readers buy 66 percent of their books in digital form, according to Forrester Research. Sales are expected to grow from $1 billion in 2010 to $2.8 billion by 2015.

Apple maintains a 30/70 split with publishers, with Apple getting a 30 percent commission on any e-book sold, with 70 percent going to the publisher.

Apple spokeswoman Kristin Huguet declined to comment on any pending litigation. Despite repeated contacts, Amazon and almost all the book publishers could not be reached for comment.

“We believe the class-action complaints lack any legal merit and fully intend to contest them vigorously. Hachette’s adoption of an agency distribution model, which is at the heart of the complaints, was an independent, unilateral decision by Hachette and was not based on agreement with any other publisher,” said Hachette Book Group communications director Sophie Cottrell, in an email to MediaShift. “Contrary to the allegations in the complaints, Hachette believes that its decision to distribute its e-books through agency has helped to increase competition and consumer choice in e-books and e-readers.”

Hagens Berman, which represents plaintiffs Anthony Petru of California and Marcus Mathis of Mississippi, argued in the original complaint that the agreement coincided with the launch of the iPad on Jan. 27, 2010. At that same time, the complaint alleges that the average e-book rose from Amazon’s standard $9.99 to around $13, something that could “dislodge Amazon” from its dominant e-book market position in the same way Apple dominated the sale and distribution of digital music files — which was investigated by the U.S. Department of Justice for antitrust violations. The DOJ declined to comment on the current class-action suit or if it was continuing its investigation against Apple.

Other publishers wanted Amazon to duplicate the model and payment system, notably Macmillan, according to court documents. Random House, which did not sign the agreement in January with other publishers and Apple, was barred from the iBookstore, the complaint alleged. Random House converted to the agency model in March.

“Price fixing is definitely an antitrust violation,” said Mark Lemley, director of the Stanford Program in Law, Science, and Technology. “If the allegations are true that the publishers conspired to fix the prices they would charge for electronic books, that agreement is illegal.”

Other agencies have found the allegations worth investigating, including officials from the European Union and both the Texas and Connecticut attorneys general. A spokesman for California Attorney General Kamala Harris and the DOJ declined to comment on any Apple antitrust investigation.

Do We Need an Agency Model?

But what if the Apple allegations aren’t true and the tech company is merely reflecting its highly competitive environment?

Robert Berring, a UC Berkeley School of Law professor who specializes in the changing publishing industry, said the industry is finding it difficult to transition to the increasingly digital world, but both Amazon and Apple exist to ride “the wave of profits,” and are not fighting for the greater consumer good.

“They are both trying to take advantage of a cultural shift,” he said.

Daniel E. Atkins, a professor of information and computer science at the University of Michigan who specializes in digital media distribution, said Apple benefiting from publishers’ dissatisfaction with Amazon pricing may well be a part of normal competition. He also said that the “agency model” may be a necessary price to cover costs.

It’s true that in the past Amazon’s tough negotiations with publishers gave the online bookseller cheaper books and lower profits for traditional publishers. So when Apple’s iPad was being developed, publishers likely saw some leverage against Amazon.

Whether one believes allegations of collusion or not, in an interview with Walt Mossberg dated January 29, 2010 — only two days after the iPad was officially announced — Apple CEO Steve Jobs said that Amazon’s $9.99 pricing for e-books was about to end. When Mossberg asked why anyone would pay more for e-books when they were cheaper on Amazon or Barnes & Noble, Jobs replied that it wouldn’t be the case. “The prices will be the same … Publishers are actually withholding their books from Amazon because they’re not happy.”

Regardless of one’s opinion on the allegations, the iPad soon began to outstrip Amazon’s Kindle as an electronic reader. Between August and December 2010, the iPad rose 16 percentage points as an e-reader, while the Kindle dropped 15 points. The original complaint points out that this occurred once the retail model was changed to the “agency model.”

But other factors are at play. “The Kindle is a much lower dedicated cost,” Atkins said. “You can do everything you can on a Kindle on an iPad, but not the other way around.” Despite the initial drops, Atkins said he believes the Kindle still has a solid future. “Some will prefer the Kindle and others the iPad.”

Atkins said he believes that until publishers can embrace the changes in digital books, they will hang onto their old way of doing business. The digital transition means a book “can offer high-quality graphics, videos or go deeply into data, and be continually updated,” he said. “It has additional value.”

While the lawsuits deal primarily with the digital distribution model of consumer books, the most radical changes are occurring in digital textbooks, he said. “Digital technology has aggregated all the traditional outlets. You don’t need the middleman you once did.”

Whether or not these class-action lawsuits have merit, they illustrate the radical changes publishing has undergone. Independent authors and editors can now self-publish and make money (provided they know online marketing), and traditional brick-and-mortar bookstores are disappearing. Although publishing houses are insisting on an “agency model,” it’s a holdover from another time and likely won’t last, Berring said.

“It’s difficult for the publishing industry to change over from the traditional model that it’s developed over the centuries,” he said, “and to adapt is really, really hard.”