Can Mainstream and Ethnic Media Collaborate? 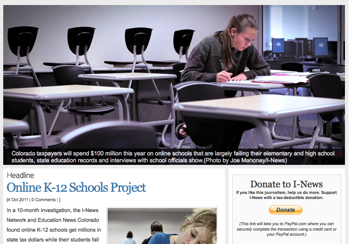 A collaboration between "I-News Network":www.inewsnetwork.org, an independent investigative organization in Denver, and "Education News Colorado":www.ednewscolorado.org found that Colorado taxpayers will spend an estimated $100 million this year on online schools that are failing their students.

While investigative collaborations are blossoming in newsrooms across the country, few are taking place between mainstream and niche media. As a result, news organizations could be missing the opportunity to reach a wider audience, tap into reporters’ talents, and uncover stories from perspectives not often examined.

Niche media include ethnic media and those that publish in a language other than English, as well as independent media that focus on a single topic such as the environment, finance, politics or technology.

We have very specific needs on how we're going to talk about an issue. And we don't want to be brought into the project to be 'the people of color stamp.'" -Kai Wright

“There needs to be more collaborations because sometimes the organizations that you want to work with are located in strategic areas you cannot get to and already have a skill set of languages or talents that you don’t have in your newsrooms,” said Manny Garcia, executive editor of El Nuevo Herald and Investigative Reporters and Editors board president. “It’s a way to expand your talent base.”

The challenges around collaborations, for any news organization, are numerous. Reporters and editors from different and sometimes rival news outlets must put their competitiveness aside; they must be able to work through problems that happen along the way without impacting the project; and they must trust their partners.

For niche media, language barriers, lack of resources in smaller newsrooms, and fewer staff with investigative reporting skills make it more challenging to team up with legacy media.

“Some of them have staff that aren’t even trained as journalists, but they are very, very passionate about informing their communities,” said Mc Nelly Torres, associate director at the Florida Center for Investigative Reporting and IRE board member. “The biggest challenge for them is that they don’t have the skills.”

As investigations decline in legacy newsrooms, fewer young journalists are getting mentoring in this area, Torres said. Both Torres and Garcia train early and mid-career journalists through IRE workshops, including investigative workshops geared for ethnic and Spanish-language newsrooms.

Collaborations between niche and mainstream media have the potential not only to create big-impact journalism, but also to help young reporters learn the deep-diving reporting skills by assisting in projects and through mentorship, Torres said.

“One of the best strategies is to plan ahead,” Torres said. “How are you going to keep it alive by working together and reach the biggest audience possible?”

Collaborations grow out of connections. Kai Wright, editorial director of Colorlines.com, a daily news site with reporting, analysis and investigations through a racial equality lens, said more networking needs to be happening between editors from niche and mainstream media or ethnic media risk being left out.

Garcia said editors must deliberately work to expand their networks.

“It’s cold calling people and developing relationships and sources, like with a beat, until you establish a trustworthy relationship,” Garcia said. “Out of pure necessity to survive, I think you just have to do that.”

Funders of investigative reporting projects have the potential to encourage collaborations by requiring, for instance, their grantees to look for partnerships and attend conferences by ethnic or specialized media as part of a grant, Wright said.

“Anytime you’re talking about a structural systemic problem, the reality is that it has to be a structural change,” Wright said.

That’s not to say that collaborations between niche and mainstream media haven’t taken place. A handful of partnerships, some led by ethnic media, have been extremely successful.

“There was a lot of reaction,” Garcia said. “The Dominican Republic cracked down on the border crossings from Haiti to the DR. And the government in DR cracked down on child trafficking.”

Another project, also led by El Nuevo Herald, on the 2009 explosion of the Puerto Rican refinery Caribbean Petroleum Corp., a company that was cited multiple times for serious environmental violations, exemplifies how editors have capitalized on the location and skills of journalists in other newsrooms. Garcia said he wanted a story looking at the refinery and couldn’t send a reporter to Puerto Rico. He asked Mc Nelly Torres, who is based in Florida, and Omaya Sosa Pascual, the executive co-director of The Puerto Rico Center for Investigative Journalism, to partner on the story.

Still another was a collaboration between the I-News Network: Rocky Mountain Investigative News Network, an independent investigative organization in Denver, and Education News Colorado to produce a three-part series examining K-12 schools. The 10-month investigation by Education News’ Nancy Mitchell and I-News’ Burt Hubbard found Colorado taxpayers will spend an estimated $100 million this year on online schools that are failing their students, among other things.

Hubbard knew the state kept a large database of online public school students in Colorado. The reporters, who had previously worked together at the Rocky Mountain News, divided the work based on expertise.

“The organization was really simple,” Hubbard said. “I did the database analysis. She did the open records requests. Nancy, she knows the education system backwards and forwards.”

Hubbard stressed the importance of discussing each person’s responsibilities in advance and sharing findings with each other along the way.

Wright cautioned against teaming with an ethnic news organization for the sake of having an ethnic voice on the project.

“We have very specific needs on how we’re going to talk about an issue. And we don’t want to be brought into the project to be ‘the people of color stamp,’” Wright said.

There must also be a balance between the goals of the investigative project and informing your partners about a community. The collaboration shouldn’t get mired in understanding the perspective from which an organization reports and writes to the detriment of the story itself, Wright said.

Demographic changes in the U.S. show that immigrants and ethic groups are reshaping the face of America, particularly in the Northeast and the South. Latinos, for instance, are the fastest growing group in Rhode Island. In California, Latinos have become the largest ethnic group. At the same time, some segments of ethnic media did better than their mainstream counterparts in ad revenues, according to the State of the News Media 2010 report. For the first three quarters of 2009, television ad revenue overall fell 8.3 percent, while Spanish-language television saw a 0.7 percent decline. And African American television ad revenue increased by 31 percent from the previous year, according to the report.

Collaboration between niche and mainstream media can thrive, journalism leaders say. And they’ve offered some ideas on how to ensure they’re successful.

“Every successful media is successful because it knows its audience. If you’re collaborating with an organization with a distinctively different audience than your own, then you’d be an idiot not to learn from them,” said Diana B. Henriques, senior financial writer for The New York Times.

Henriques, who was among some of the first in the NYT to participate in collaborations more than a decade ago, said collaboration participants must go into the partnership with a clear set of guidelines on what’s acceptable before the project starts.

In a collaboration between Henriques and ABC News’ Brian Ross, they negotiated on, for instance, who had the rights over what and who would have the last word on the collaborative venture.

“We were unwilling to be in a position in which one of our media partners would put something on their show that was done in collaboration with us which we would not have been comfortable with,” Henriques said. “And it turned out that, yes, reasonable minds could reach an agreement.”

Reporters and editors should be open to learning from the strengths of their partners. If a mainstream news outlet is collaborating with a niche market, a website, or a publication that’s highly specialized, in say finances, the niche outlet is going to know what the burden of proof will be for its highly knowledgeable audience, Henriques said.

“We certainly want to be sure we are persuasive, in our collaboration, to the niche audience,” she said. “But they should also be guided by us, because we don’t have the luxury to communicate with just a highly sophisticated niche audience.”

Here are some tips shared by journalists who have done these types of collaborations: