The Importance of Understanding the Growing U.S. Latino Market Online 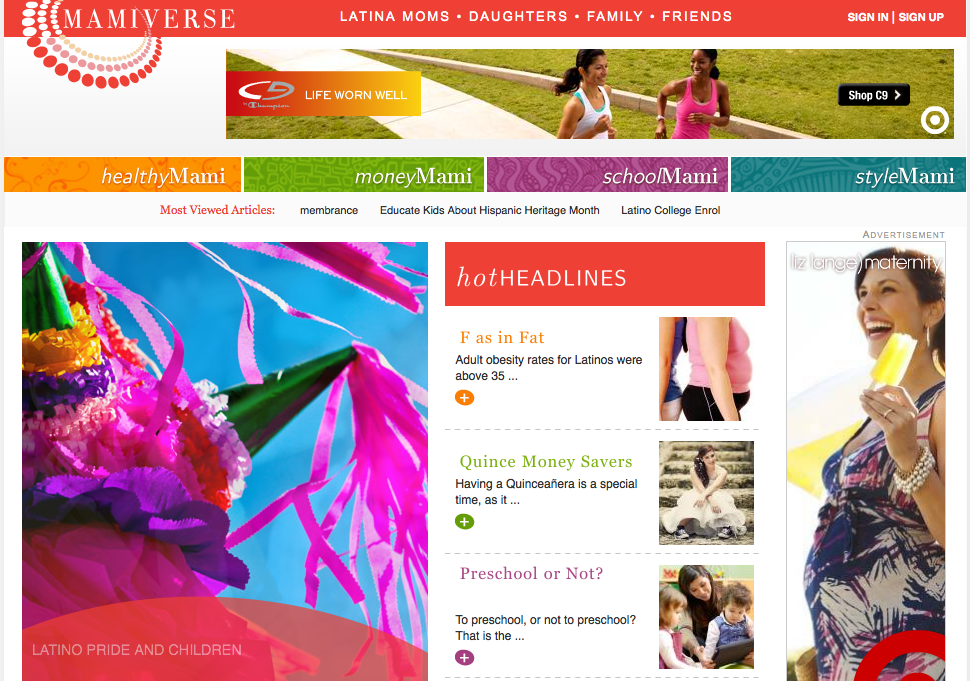 Rene Alegria's Mamiverse is working to capture a growing media market for Latinos.

As a new media professional, educating yourself about this population (if you haven't done so already), is an integral step.

Rene Alegria, founder of Mamiverse, a website focused on Latina moms, has heard every possible misconception of the Latino market. For years, these misconceptions kept many businesses from tapping into this fast-growing consumer segment.

However, they also provided Alegria with an opportunity to become a market trailblazer by showing organizations the proverbial boat they were missing.

Most notably, Alegria founded Rayo at HarperCollins, the first-of-its-kind Hispanic book publishing imprint. Launched in 2000, Rayo published books in English and Spanish. However, there was doubt in the industry about the viability of this market.

“For many, publishing books geared to the Latino market seemed like a hopeless endeavor,” Alegria said. “They couldn’t see the purchasing power and influence of the U.S. Latino market.”

Rayo, by all standards, became a success, publishing the works of several award-winning authors, and helping HarperCollins tap into a new source of undiscovered revenue.

Seeing the same void or opportunity he saw years before in the publishing industry in the online sphere, Alegria decided to launch Mamiverse. While providing high-quality content for Latina moms is a top priority, the following ClickZ.com stats illustrate why Mamiverse was also a smart business choice:

When I was asked to help Mamiverse with SEO (search engine optimization) research, I began to notice that even though I identify myself as a “Latina,” I and many of my colleagues are also missing the boat on the significance of the U.S. Latino market online and how to reach them effectively. We were making the same mistake others had done before us.

Why New Media Should Care about the Latino Market

According to the U.S. Census, Latinos are the fastest-growing and largest minority. Their presence is also growing significantly online. In 2007, only 56 percent of Latinos were online. By 2011, the percentage of Latinos online climbed to 62.9 percent.

A journalist or communications professional would be foolish not to tap into this market considering its sheer size — 50.5 million people — a number that does not include the estimated 11 million undocumented immigrants. This is particularly true considering that the U.S. Latino market is as diverse as the general market, with individuals having various interests and lifestyles. In fact, according to the U.S. Census, it’s projected that by 2050 Latinos will constitute 30 percent of the nation’s population. That roughly equates to 1 in 3 Americans.

The Misconceptions of the Latino Market

As new media professionals, we understand that the Internet has torn down the mass media model by placing a heavy focus on niche marketing. While on the surface, this seems to make it easier to reach targeted audiences, misconceptions and old habits create many obstacles. This is particularly true for the U.S. Latino market, which has ironically been part of the U.S. cultural fabric since the get-go. Breaking down these misconceptions is a first step.

Misconception #1: All Latinos speak Spanish, and to reach them, you must do so in Spanish.

There is a reason why emerging sites like Mamiverse are written in English. While immigrants may speak Spanish, generations that follow may vary in degree when it comes to their Spanish fluency, ranging from none to fully fluent. As an example, a recent study published in American Political Research found that English-language print ads have greater impact in mobilizing Latino voters than Spanish-language print ads. One can identify as a cultural “Latino” without having to speak Spanish. By default, this opens up countless doors to other communities who may have not found your information through typical channels you routinely use, such as parts of the international community who also imbibe online content in the preferred language of the web: English.

While it is true that Latinos may share certain similarities in the same way that “Europeans” do, the U.S. Latino population is composed of individuals that come from different countries, each with its own history, culture, cuisine, etc. This complexity is compounded by the fact that traditionally, certain parts of the U.S. have different immigrant concentrations. Los Angeles, for example, has a stronger Mexican influence than Miami, which traditionally has a Cuban one. In fact, sub-groups that are ethnically from Spanish-speaking countries may not even identify as U.S. Latino, such as Chicanos (Mexican-Americans). While it is true that a pan-Latino movement does exist, one must be very sensitive to the nuances each Latino group brings. “In-culture” messaging focused on the Latino experience in the U.S. helps to reach the broadest number of Latinos. Doing so in English furthers this reach into the coveted “New Generation Latino.”

The idea that Latinos are only concentrated in cities such as New York or Los Angeles is false. While the 2010 U.S. Census shows that in 2009, 47 percent lived in California and Texas, it also shows that 16 states have at least half a million U.S. Latino residents. This includes Georgia, Florida, Arizona, Illinois, Massachusetts, Nevada, New Jersey, New York, New Mexico, North Carolina, Pennsylvania, Virginia and Washington. Given predicted growth patterns, it is fair to say that in the future, most states will have a significant Latino population, with hyper-growth areas being far from the existing cities stereotypically associated with the U.S. Latino.

Misconception #4: Latinos have not yet “come into their own,” and currently do not wield any real political and economic clout.

Alegria believes that the Americanized-Latino demographic will play an important role in the upcoming presidential election, which is why later this year Mamiverse will be launching VoterMami, a section designed to help inform Latinas on 2012 election issues. While he gives several reasons for this influence, the most important one is that U.S. born Latinos are fueling 55 percent of the total U.S. population growth. These are individuals who have grown up in the U.S., are integrated in every part of American culture from politics to business, and have become a key center of influence.

Economically, the 2010 U.S. Census revealed that between 2002 and 2007, the number of Latino-owned businesses grew by 43.7 percent, which was twice the national average. By 2007, the 2.3 million Latino-owned businesses generated $345.2 billion in sales and employed 1.9 million. The Immigrant Policy Center has a project that allows you to see how U.S. Latinos, Asians and immigrants contribute towards your state’s economy.

As a new media professional, educating yourself about this population (if you haven’t done so already), is an integral step. Additionally, start familiarizing yourself with topics that may be of interest to this population, as well as cultivating relationships with community leaders who may be able to serve as cultural liaisons. Above all, however, remember that the most important step when targeting niche groups is learning how to both communicate and listen effectively.

Sandra Ordonez is a web astronaut who provides digital strategy, collaborative consultation, community management, and website design.
Currently, Sandra serves as the Senior Digital Strategist to NYC and TopMBA Connect. She also serves as the External Communications lead for Joomla. Sandra is the founder of various online worlds including Virgins of NY. Previously, she was the Communications Manager for Wikipedia. She graduated from American University with a double degree in International Relations and Public Relations.