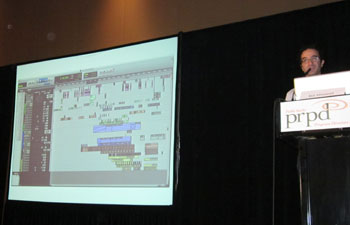 Radiolab's Jad Abumrad offers a glimpse of the show's innovative editing process in his keynote speech at the recent Public Radio Programming conference.

What does innovation feel like? According to newly minted MacArthur genius Jad Abumrad, it’s a bit like being chased by a tiger: visceral and gut-churning.

Abumrad, the co-host of WNYC’s ground-breaking show Radiolab, advised the audience at last week’s Public Radio Programming Conference (PRPC) to seek out this life-or-death sensation. Innovation isn’t always obvious, he explained in his keynote address, and can elicit backlash from those comfortable with the familiar. You can’t innovate by talking about it, only by doing, which can involve a painful “radical uncertainty.” Sometimes you can only recognize promising new directions in retrospect.

We don't have to succeed in building a utopia; we just need to get closer." -Jay Allison

Abumrad’s keynote, “Change, and Why It’s So Hard,” kicked off three lively days of debate on: Should public radio change? Can it? And if so, how?

Abumrad, a lauded producer who has painstakingly carved out a space for experimentation with support from a big urban station, falls on one end of this debate. On the other end are program directors in smaller markets who have few resources or staff hours for research and development, and don’t want to alarm current listeners — many of whom count on NPR’s flagship news programs, and donate accordingly. These stations confront the infamous innovator’s dilemma: They have found a successful formula for serving a core constituency, and find it hard to recognize or explore the value of disruptive new approaches.

But, with public service under the funding microscope, and the country’s demographics shifting sharply, serving that educated, well-heeled core constituency may no longer be enough. On panels, in the hallways, and online, PRPC attendees grappled with the variety of ways in which public radio needs to expand — to younger, more diverse listeners; across new digital platforms; in terms of tone and style; in quality and quantity of local reporting.

Several of these discussions were convened by the Association of Independents in Radio (AIR), for which I now serve as the media strategist. AIR executive Sue Schardt worked with PRPC organizers to both invite independent producers to attend, and develop relevant sessions that would bring them face-to-face with station programmers and funders. With support from the Corporation for Public Broadcasting (CPB), AIR also provided “New Voices” scholarships to up-and-coming producers from around the country.

Schardt herself served as the moderator for a panel titled “Beyond Age, Color, Creed: A New Public Radio Conversation.” While the panel brought together a range of perspectives, several speakers and audience members of color spoke frankly about how they were leery to tell friends they worked for public broadcasting because they didn’t feel it represented their communities. Panelist Jasmin Garsd, of NPR’s Alt.Latino, noted that when her boyfriend wore an NPR T-shirt she gave him, his friends joked that it stood for “Not Puerto Rican.”

While the line garnered laughs, similar themes about representation and exclusion were echoed in a panel about how to appeal to millennials. You can start, said Snap Judgment host Glynn Washington, by “not calling them millennials,” and by paying them to produce content with a new sound and for new platforms.

So where might support for such innovation come from? At the conference, AIR offered one answer by launching Localore, a project designed to support 10 independent-minded radio, TV or digital producers to work with 10 public stations across the country. The goal? To increase their capacity for innovation in ways that will connect them more deeply to their communities.

During Thursday’s launch event, CPB CEO Patricia Harrison announced a $1.25 million grant for Localore, much of which will go directly to the producers and their collaborative teams to support 9- to 12-month projects that go outside of traditional platforms and storytelling routines, and create new public media life forms. Localore — also funded by the MacArthur and Wyncote foundations and the NEA — builds upon the successes of AIR’s earlier MQ2 project.

In her remarks in Baltimore, Harrison spoke of producers who will, as part of the “public media family,” mine for “stories that are hidden treasures of insight, edginess, compassion, anger, humor, understanding, and in the process connect us to neighbors and neighborhoods beyond our own.”

The videos submitted to Localore’s Station Runway are already painting a vivid picture of diverse communities from coast to coast:

Producers and Stations: Apply for AIR’s Localore Initiative from AIR on Vimeo.

Both stations and producers are encouraged to apply by Nov. 10; more than 20 stations have already committed to submit a 3- to 5-minute piece of media to Localore’s Station Runway. (A webinar on the project happened at 1:00 ET today; catch the replay.)

The odds that Localore producers can succeed in developing new and spreadable models of public media storytelling are bolstered by the growing network of makers, funders, and outlets striving to re-envision local news.

The project’s name is a play on the term “locavore” — someone committed to eating fresh, regionally produced and flavorful foods. And just as is the case with the local food movement, there’s a national groundswell to forge new chains of production and distribution, and meaningful connections between news producers and consumers. Localore aims to inspire a similar taste for reporting that’s sourced from nearby, prepared carefully and consciously, and good for both mind and community.

Supporters of such bottom-up, tech-enabled approaches to public media transformation were in full force at the PRPC conference — leaders from the Third Coast Festival, PRX, Mozilla, the Public Insight Network, the National Center for Media Engagement, and others, including veteran independent producer Jay Allison, who gave the closing “benediction.”

As befitting a sermon, Allison promised to offer equal parts chiding and inspiration, and to ultimately send attendees away with a sense of redemption. He praised many public radio makers’ and programmers’ commitment to mission, but noted that it was easy to “get lazy” when audience numbers and money become the key goals. His advice? Hire a person who scares you, and “do something too creative.”

“Listeners like us for our news, but they love us for our heart,” Allison said. “All of this is utopian of course, but so what? We don’t have to succeed in building a utopia; we just need to get closer.”

Jessica Clark is the Media Strategist for AIR, and a Senior Fellow at American University’s Center for Social Media. She is the co-author, with Tracy Van Slyke, of Beyond the Echo Chamber (New Press, 2010).