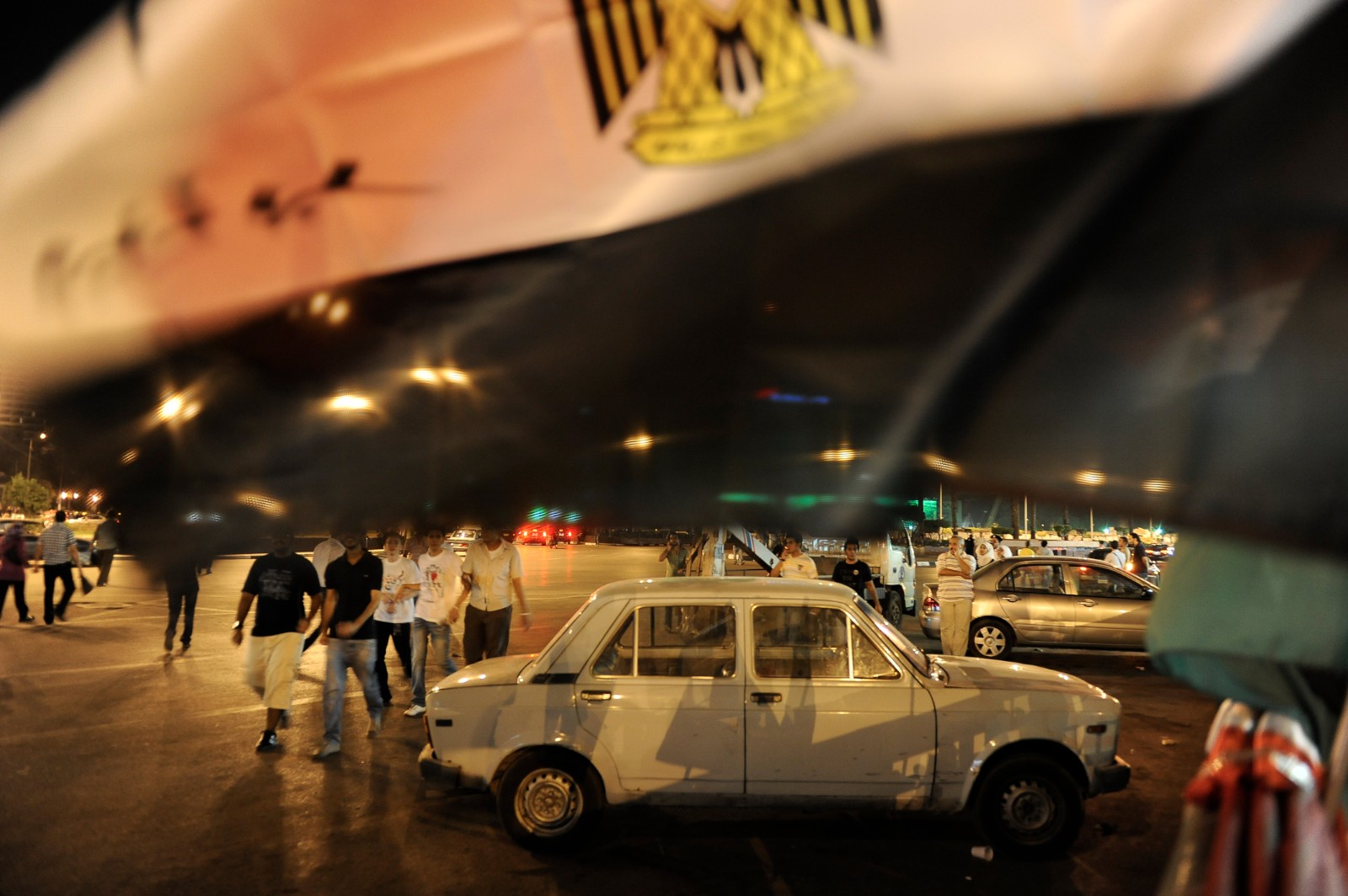 "You can say whatever you want, but you will pay for it." - Videoblogger Salma el Daly

Since the uprising, a plethora of new online initiatives have sprung up. Several citizen journalists have become full-on celebrities. News agencies have started disseminating on Facebook. New TV channels are aired.

It would seem then, that freedom of speech is blooming, too. But the red lines restricting Egyptian voices are still there, only pushed back.

“You can say whatever you want, but you will pay for it.”

That’s how Egyptian videoblogger Salma el Daly describes the extent of freedom of speech in Egypt at the moment. Even though there seems to be more freedom of speech than during ousted President Hosni Mubarak’s time, Egyptians still can’t freely express themselves. The military is leading the country, and punishes people who criticize the army.

And a week ago, the military raided Al Jazeera’s offices in Cairo, confiscating equipment and arresting an engineer. “If broadcasting the truth is considered endangering stability,” the TV channel’s manager Ahmed Zein said at a press conference after the raid, “then it is an honor for any media outlet to be endangering stability.”

“Mainstream media and citizen journalism used to be two separate islands. After the revolution, the lines have blurred more and more,” said journalist and videoblogger Sabah Hamamou.

She is deputy business editor at the state-owned Al Ahram newspaper, and also a citizen journalist with her own YouTube Channel Masrawyya, which she established during the uprisings in the spring.

The new online journalism can be divided into three tiers. First, there are the independent bloggers. Second, joint initiatives from citizen journalists, like campaigns against police brutality, corruption or for poverty alleviation.

And third, more institutionalized citizen journalism platforms, such as Global Voices, a community of more than 400 bloggers and translators who report on blogs and citizen media from all over the world. Or Menassat.com, a platform focusing on improving journalism in the Arab world. Menassat is sharing news stories, cultural pieces and gathering interesting blogs, in addition to being a community platform for Arabic journalists.

Many citizen journalists move freely between mainstream media and these three tiers, such as Hamamou, who works in a traditional newspaper and at the same time, runs her citizen journalism site. Or there’s Hossam El-Hamalawy, a leftist journalist who helped when the State Security Investigations headquarters was stormed in March, obtaining and leaking important institutional information. El-Hamalawy has his own blog, 3arabawy.org, where he writes on social justice and human rights. He is also one of the founders of Piggipedia, a Flickr page where anyone can post pictures of police officers who are allegedly using torture and violating human rights.

Citizen journalism and blogging has deep roots in Egypt. Citizen activists started writing blogs in the early 2000s. The Egyptian movement for change, Kefaya, used the blogsphere to post pictures and news from their demonstrations, outside the mainstream media.

From there, bloggers continued using their growing impact by bringing an important issue to the forefront: the torture of civilians by the Egyptian police.

Finally the mainstream media had to pick up the cases brought up by the independent blogger scene.

(For more on the blogging scene in Egypt, check out this earlier coverage on MediaShift.)

After the revolution, the impact of citizen journalists and independent media has kept on growing. Mainstream media is picking up stories from the indy scene, and the online audience is overall increasing, as Internet usage is up after the revolution.

Egyptians are turning to new media sources, because State-controlled TV channels and newspapers were accused of biased reporting during the Mubarak era. The Al Ahram newspaper, for instance, confessed this after Mubarak stepped down and published an apology for their readers about inaccurate reporting.

New publications aim to serve the goals of independent journalism better. The initiatives include el Tahrir; Bikya Masr, a regional news site; Elaph.com, an Arabic online newspaper based in London; and Youm7, which offers online coverage of Egyptian news.

Political awareness is spread in animated satires produced by independent media. For example, Kharabeesh publishes films and cartoons on its YouTube channel, and the satires have gained in popularity.

Media scholar Maria Roeder describes the new media as an innovative cultural space. She is doing her Ph.D. on the changes in the media used in post-revolution Egypt for Mannheim University in Germany, and conducting her research in Cairo.

“The new media is not just a tool for organizing protests. It is a space for people to express themselves, to form identities, to exchange opinions. Before the revolution, social media was part of the popular culture. Now it’s part of the political sphere,” she said.

In this online boom, some journalists are gaining celebrity status. For instance, Nawara Negm, daughter of the famous poet Ahmed Fouad Negm, started out as a journalist and political blogger and became a spokeswoman for the Egyptian revolution, often aired on Al Jazeera during the 18 days in Tahrir square. After Mubarak’s ousting, she got her own talk show on Tahrir TV. Now she has 82,000 followers on Twitter.

Another trend is to find news on Facebook. On Jan. 25, a Facebook site called the Rasd News Network started covering events related to the revolution in real time in the form of updates on the site. It quickly became a clearinghouse of news from the revolution, and still has 1.1 million followers.

“But the accuracy level was fairly mediocre, and nobody knows who runs the site,” said Adel Iskander, a media scholar at Georgetown University in Washington, D.C., who specializes in the Middle East.

He added that rumors hold that RNN is operated by the Muslim Brotherhood. After some under-reporting of liberal protests, other similar sites have sprung up, capitalizing on the exodus of RNN. One of them is the Egypt News Network, or ENN, with 13,000 followers.

The new media gives an opportunity to communicate with the younger generation, and more precisely with the elite. Still, only around 25 percent of Egyptians are online and the bloggers can be likened to the country’s new intellectual aristocracy.

However fast online media is growing, TV remains the dominant medium for the Egyptian masses. Sixteen new channels have started since the revolution, among them Channel 25, Tahrir TV, and the January 25 channel.

However, as a news source, Al Jazeera is highly regarded, confirms activist and blogger Abdelrahman Hassan. Al Jazeera’s role is primarily that of an amplifier.

But this media boom was just halted by the army last week, after deciding no more licenses would be granted to new satellite TV channels. Likewise, Al Jazeera’s office in Cairo was forced to shut down. The network’s licenses were canceled and the accreditation of staff in Cairo was withdrawn by order from the information minister, according to Al Jazeera.

Earlier there was an official censor and editors-in-chief of the government publications were appointed by politicians, effectively imposing self-censorship. But even though bloggers and journalists have more freedom now, there are still repercussions.

Bloggers have been arrested and tried in military courts. Archaic laws are in place banning criticism of the army. Blogger Maikel Nabil Sanad was sentenced to three years in prison for his critique of the army. He has been on a hunger strike since Aug. 22, and has been hospitalized.

The international association Reporters Without Borders and The Egyptian Organization for Human Rights have several times appealed to Egyptian authorities to release Nabil.

Others are luckier. Asmaa Mahfouz, a prominent blogger who urged demonstrators to take to the streets on Jan. 25 in a YouTube video that went viral, was charged with a similar “crime” as Nabil. She had called SCAF, the military council in charge of the country, a “council of dogs.”

But after a huge public outcry, a lot of it taking place on Twitter and Facebook, the military backed off and released her and fellow blogger Loay Nagati on bail in August. Referring to the Mahfouz case, Egyptians now use a new term: “released with a hashtag.”

This post is a part of a story project The Cloud in Egypt: Help or Hype? which is being crowdfunded on Spot.Us. You can support the project by donating for the pitch on Spot.Us, or taking the survey to earn free credits on Spot.Us.