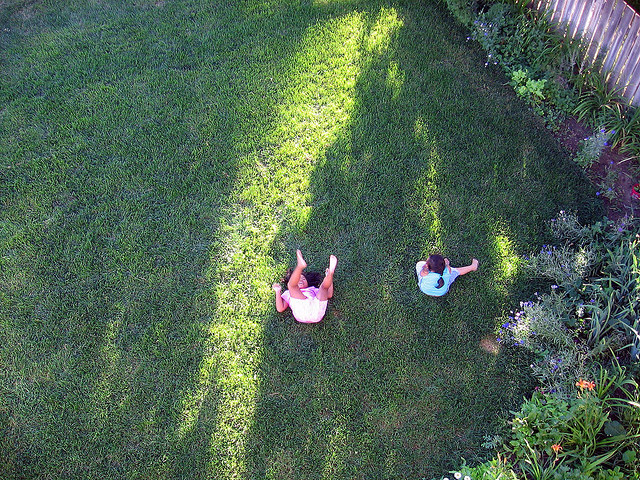 Last spring, there was a minor outcry when the Auburn School District in Maine
announced that it would be piloting a one-to-one iPad program with its
kindergarteners. Part of the uproar involved the cost of the program —
some $200,000. But much of it involved the notion that somehow young
children should not be exposed to technology, that somehow iPads and
other gadgets inhibit their imagination and make them play less — or, to
slightly modify one of Apple’s famous logos, to “play different.”

But is that really the case? Has technology really dampened the way children play?

"There seems very little evidence that the influence of technology and media is making kids play less."
ADVERTISEMENT

A new study (PDF)
of children’s playground games and songs suggests that much of the
outcry about declining kids’ play may be exaggerated. The research comes
from a collaboration between the Universities of London, Sheffield and
East London, along with the British Library, and draws from the Opie
Collection and the work of the famous children’s folklorists Lona and Peter Opie.

And as most folklorists will tell you, the discipline itself has
always been associated with the idea that cultural practices — whether
of children or adults — are dying out, and that songs and games and
folktales must be collected and preserved to prevent that from
happening. So it was in the 19th century, and so it is today.

Things have changed since the Opies did
their research on children’s folklore in World War II. It isn’t simply
the rise of technology or media influences; family structure is more
fluid (with more divorces, for example) and the definitions of
childhood, adolescence, and adulthood have changed too. Children,
particularly those from higher socio-economic backgrounds, have more
leisure time, but there’s also more surveillance over their activities —
no matter their background. No more playing freely in the street, for
example. The playground space — where many folklorists observe
children’s games and songs — has changed as well.

But despite the fears about an untoward influence of media and
technology, the researchers found that children’s folklore and
children’s imaginations still thrive:

Modern children are, then, immersed in an enveloping
mediascape, which is impossible for them to ignore. However, our
research indicates that playground culture and children’s games are not
overwhelmed, marginalized or threatened by the quantity and plurality of
available media. We have seen that children make use of the cultural
and media resources that surround them, and creatively manipulate them
to their own ends. In the playground, children are still singing rhymes
and songs that have come down through the decades, whilst sometimes
bringing them up to date with references to the latest TV shows, soap
opera characters and pop stars. Skipping games and clapping games are
still popular, and hula-hoops have made a comeback. Cheerleading and
other dance routines are in evidence, children citing influences as
diverse as Michael Jackson and “High School Musical.” Make-believe games
and old favorites such as Tig are staples of the primary school
playground. Media is an undeniably important aspect of children’s lives,
but part of a wider repertoire of playground culture that also includes
older games, songs and rhymes.

Children’s play is changing, as it always has and will continue to.
But there seems very little evidence that the influence of technology
and media is making them play less.

Photo of kids on the playground from the Seattle Municipal Archives and used with Creative Commons license.