Traveling Back in (Technology) Time With Hurricane Irene 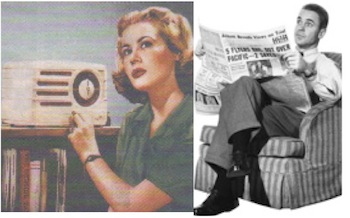 Hurricane Irene brought us back to an earlier media and technology era.

Hurricane Irene brought home for me how our media technology defines eras.

On the eastern end of New York’s Long Island on Saturday evening, as the storm approached, my family and some friends were having a pizza party for my younger daughter’s birthday at Emilio’s, a local restaurant in Greenport.

As the technology receded, then came back, intermittently and in stages, it felt as if my family and I were moving back and forth in time across the decades."

As the technology receded, then came back, intermittently and in stages, it felt as if my family and I were moving back and forth in time across the decades.

Our first taste came when a rumor spread through the small town that power would be cut off at 6 p.m. to protect some local marinas. I paid the pizza bill at 5:45 to be sure I could use my credit card. We talked of scooping Italian ices by candlelight as it melted in the freezer.

The rumor was unfounded, but the electricity finally did go off at 6:10 a.m. the next morning, as wind, rain, branches and walnuts from a tree in our yard struck the windows and walls.

I had, partly because of the urging on TV of a Suffolk County official, charged our computers, phones and iPad, though I accidentally neglected my BlackBerry.

With no power, we had no lights, no television, no Internet and, it turned out, intermittent cell phone service for the phones and the iPad, on three different services.

Back to the 19th Century

We had no landline telephone service, until that afternoon I discovered an old POTS (plain old telephone service) set tucked beside the bed in my parents’ room that plugged directly into an RJ-11 jack and needed no other power.

I soon realized how current my family’s media and communication habits are, how integrated into our lives they are, and how different from when the house was built, more than 170 years ago.

With no Internet, phone, TV or radio, we sat around and talked as we ate muffins we’d bought, washed down tea we heated on the gas stove, which was working (minus the electric flint and oven temperature gauges) thanks to tanks hooked to the house.

My daughters read books they’d brought. My wife and her mother, who was visiting from Memphis, Tenn., read a newspaper we’d picked up Friday. Life felt, at that moment, how it might have in, say, the late 1800s or early 20th century: no electricity, gas for cooking, no way to contact the outside world without leaving the house. We talked of using wood from felled branches, if the gas gave out for some reason.

Once I found the phone in my parents’ room, we moved a few decades further, and called a few others to see how they were faring. My wife suggested we plug my computers into the phone line, but none have an RJ-11 jack.

After breakfast, and unable to go outside in the rain and wind, many of our usual forms of entertainment and socializing were unavailable. I didn’t want to use up computer batteries on a DVD, not knowing how long we’d be without power. My mom never broke out her Kindle.

Starved for information, my stepfather pulled out a battery-operated radio, which let us get scratchy AM reception and hear nominally useful and geographically broad storm updates mixed with commercials for local businesses and national products. We were moving into the mid-1940s.

I discovered my BlackBerry was working as a text from my sister, in Georgia, prompted an alert sound. I called her, let my daughter get birthday wishes, then went out to the car — a very 21st century Prius hybrid — powered it up, and listened to the radio while my phone charged.

At 1:30 p.m., the electricity came on for a bit, but not the cable TV or Internet connection. I plugged all our devices in, again, to keep them charged, but our media and entertainment were still limited to print and terrestrial radio. My cell phone service was flaky, and I couldn’t get on the web, or Facebook or Twitter through my phone’s apps.

It felt oddly frustrating to not be able to just log on and get more detailed information about what was going on, what the damage had been, what we could expect in services in our area.

We all started to adjust. Without the media and technology stimulation, it seemed as if our body rhythms slowed.

We must have 15 to 20 screens in that house, and we always seem to be accessing them, to check email, read news, watch video, interact on a social network, read a book, play a game, web chat, text message, and, yes, watch a regular old TV show or movie (though sometimes through a quasi-legal streaming service).

Without those screens, my kids and I sat around a lot more, maybe dozing a bit, reading printed matter, doing dishes, sweeping the floor, talking a bit. For some reason, none of us turned on one of our MP3 players to listen to music or watch a TV show.

The children seemed momentarily befuddled at the idea of having electricity but not being able to watch episodes of “Dr. Who” on Netflix. I restrained myself from making a “when I was your age, we had to watch TV shows when they were on!” quip.

We were still in the 1940s, media-wise. Fortunately, my children and their friends next door like to play with each other and read, though I’m not sure how my teenager would have fared had she been without Facebook or Tumblr for days.

She did joke about how she couldn’t see what any of her friends were up to, and one relative later complained that we hadn’t been posting Facebook updates about our status as the storm progressed.

Once the weather cleared enough, we went outside, checked the house for damage, tried to clear a bit of flooding from the basement, dragged fallen branches from the yard to the curb, and took a walk to discover downed trees and sagging power lines. Thankfully, we heard of no major injuries or damage in our area.

The adults in the house took a drive and found that most of the surrounding towns were still without electricity, and so signs that usually gave information were blank. Hand-written notes on restaurant and store doors told us they were closed due to Irene.

Back to the Future

When cable TV came on for good that night, we entered the later part of the 20th century. I eagerly turned on the local Long Island Channel 12 news to hear updates on what the storm had done locally in a way I hadn’t been able to since the previous evening.

And when Internet was restored with a steady and reliable signal on Monday morning, it was as if our bio-rhythms kicked back into high gear. We all went to screens and logged onto our various networks. My children quickly got onto Netflix to catch an episode of “Dr. Who,” something of an obsession in our house.

Before you think I’m oddly obsessed with media (which I may in fact be), let me state that my higher priorities were, of course, safety, food, shelter and warmth. We had stocked up on food and water, had flashlights around the house, and I was careful not to drain the car battery while charging my phone, lest we not be able to drive away in an emergency.

We were fortunate to have gotten away with little damage — a few rain gutters and that walnut tree took some hits. Many, including my family in New Jersey and Virginia, were not so fortunate, and are still without electricity as I write this two days later.

And I am also grateful for the peek I got at how how media and technology are layered through our lives in ways that define our eras.