Teaching Journalism in an Age When News Comes to You 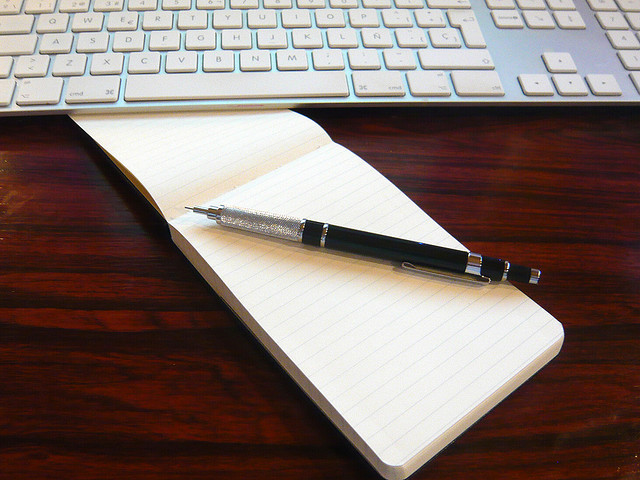 Photo by "Berto via Flickr":http://www.flickr.com/photos/bertop/.

Does it matter where a story comes from, as long as it makes the news? Apparently it doesn’t matter at all, to many of the latest crop of journalism students who believe their smart phones hold the keys to truth.

And so, a sinister thing is happening in the world of journalism, and I’m going to get right to the meat of it, the way we used to do it on CNN Headline News.

Today's journalism students are like no other, in that they were born with a smartphone in one hand and ear pods in the other. The world comes to them, not the other way around."

You remember Headline News, a newscast every half hour, no matter what. When the concept was new, critics called us many things, the most polite of which was “Short Attention Span Theater.” I would have preferred “Streamlined,” but I was gratified we were noticed at all. The important thing is that, whatever we were called, the journalistic process that brought our stories to air was not streamlined.

As the eyes and ears of the public, CNN reporters and internal staff chased stories. Facts were gathered, confirmed, checked and double-checked the old-fashioned way, face to face or on the phone with a reliable source. And that’s where an interesting, new development comes in.

when the news comes to you

Today’s journalism students are like no other, in that they were born with a smartphone in one hand and ear pods in the other. The world comes to them, not the other way around. I did not expect that this would have a profound effect on their approach to newsgathering — after all, writing the news is simply the act of telling a story objectively and very well — but it has.

As Storyteller in Residence at Centennial College in Toronto, I spend time with journalism school students and their professors. I prefer to devote as much time as possible to discussion, rather than lecturing. The atmosphere is loose, and the kids are relaxed … relaxed enough to ask, over and over, what’s wrong with giving credibility to unsolicited photos and reports that arrive on their cell phones.

At first I was horrified. Then I realized they never have known a time when information was not immediate and in their face, screaming for attention. When there is so much of it, a person begins to believe it’s real, no matter where it comes from. But that doesn’t make it accurate.

Here’s a perfect example, a story that percolated for an entire year before it reached its recent conclusion. If its associated cell phone video had gone viral, it would not have been questioned by many new reporters. A 25-year-old man in Atwater, California was tried in June 2011 on eight felony counts, in connection with the apparent rape of a 20-year-old woman. She said it was rape, he said they’d been together three times and the sex was consensual. He allegedly recorded their last encounter on his cell phone. That footage, along with the woman’s genital trauma consistent with rape, was damaging enough to convince prosecutors to take the case to trial. As I write this, those prosecutors are wondering what went wrong. Their efforts resulted in a hung jury on all eight counts, no conviction. Translation: the video proved nothing. If it had gone viral, it still would have been worthless. Not much on which to base a story, your reputation and another human’s life.

It’s clear that once a reporter buys into an anonymous video’s authenticity, it’s an easy slide into the next crucial step, which is deciding whether or not to use it, and how quickly. Because there’s no longer enough time to evaluate information before it’s replaced by something even newer, there is a tremendous temptation to use it now — presumably, before a competitor does.

This is where I deliver the bad news: It doesn’t matter how fancy the video is, how glossy the pictures are, how compelling the mystery voices in the background may be. Be very, very careful. Step back and think about it. Your temptation is nothing new, I confess, it’s been mine, too.

Their shiny new faces morph from hopeful to doubtful to are you nuts? I don’t blame them; they’ve never had to wait for anything, so why this? Feeling as if I may have crushed their passion forever, I try to recover by issuing them a new challenge: the universal truth about reporting.

A story is only as good as the source. Now your job begins.

Some of them get it! They understand that journalism is storytelling, but it shouldn’t be a fairy tale.

Ear bud photo by by Dan McKay via Flickr.

Lynne Russell anchored CNN and CNN Headline News from 1983 to 2001, making her the first woman to solo anchor a daily primetime network newscast. Her long-standing dedication to the people’s right to know was recognized in the New York Times, which called her a “just-the-facts stalwart of CNN Headline News.” In the Washington Journalism Review, she took a spot as “Best in the Business.” A private investigator and former deputy sheriff, Lynne now writes romantic crime novels and divides her time between Atlanta, Georgia and Toronto, Ontario, where she is journalist in residence at Centennial College.