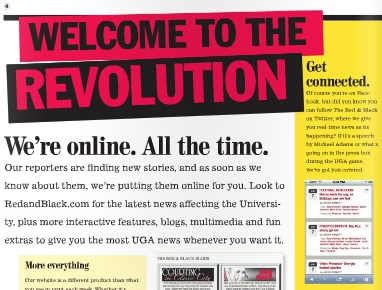 In its first issue of the school year, the University of Georgia student newspaper announced plans to publish in print only once a week.

The Red & Black, one of the largest and most-feted college newspapers in the country, recently dropped a bombshell on its readers and the student journalism community.

In a wraparound section of a special issue published on the first day of the new school year, the University of Georgia student newspaper revealed it will be switching from a daily to a weekly print edition.

"This is by far the most proactive, high-profile student newspaper shift away from print."

According to Ed Morales, Red & Black’s editorial adviser, staff are simultaneously rolling out a digital-first workflow and publishing philosophy. The publication’s website will now be the “main arm for delivering the news of UGA to the masses.”

To be clear, this is a huge move within college media. In recent years, some daily campus newspapers have dropped Friday editions and a few smaller papers have gone online-only due to tough economic times. But this is by far the most proactive, high-profile student newspaper shift away from print.

As the paper explained on the front page of its introductory wraparound, “Forget everything you’ve ever thought about newspapers, because we’re redefining how it works. Think a breaking news operation, run by the generation which grew up with computers, cell phones and iPods.” Or as it told readers more simply online: “Welcome to a media revolution.”

Reasons for the Revolution

The Red & Black is a major player within college media, acclaimed for its reporting and new media work. Last year, the paper earned Associated Collegiate Press Pacemaker awards (the student press equivalent of the Pulitzer) in both the Newspaper and Online categories.

And so the suddenness and boldness of the newspaper’s digital shift has left many in student journalism circles curious about its root causes. In an interview, Morales outlined three main reasons for the Red & Black revolution.

1) Educational, Not Financial. “Our publisher Harry Montevideo was asked by our board of directors to look into how to keep the Red & Black viable within the shifting dynamics of this business,” he said. “Financially, we’re not in trouble at all. But educationally, our mission is to prepare students for the next level of journalism. And the next level of journalism is digital first. That’s the way it is. We wanted to see if there was a way to get the students to focus on the Internet, on the website, in a way they haven’t before. A daily print paper pretty much ties them into doing that daily miracle, as we call it, every day. If you take that away, they will be more inclined to think about the daily breaking news cycle on its own merits, instead of how they’re going to make it fit the space.”

2) Little Computer Competition. “Students don’t pick up newspapers as much as they used to because a lot of them get their news from the little computers in front of them — their smartphones, laptops or tablet PCs. Like a lot of other college newspapers, we’re having people just not pick up every paper like they used to. Ten years ago, you’d put the paper out and there wouldn’t be any left by noon. Now, we’d have papers to pick up at the end of the day. So we were spending a lot of money to put out papers people weren’t picking up, quite frankly.”

3) The Good Stuff. “We want to make sure the product we put out is strong and meaningful. With the daily paper, you have to fill it, no matter what. We don’t have wire copy. We feel it’s filler. We’d rather have our own news. But there were some days we were putting stuff in the paper that didn’t deserve to be there. And I think a lot of students understood we were suffering from quality because we had to fill space … We want to have the opportunity to put only the good stuff in, always.”

The new online edition will run daily breaking news, blogs, expanded video and audio, and other interactive elements that will stand on their own or accompany content featured in print.

The weekly print paper will focus on “investigative articles, personality profiles, in-depth stories, expanded sports coverage, a full listing of local events, and features on what to do in the coming week.” Red & Black staff sum up the weekly as “informed, in-depth, indispensable,” and a dramatic design and content departure from the old daily. It sports three sections — news, sports, and variety.

“The news section is like Time, the sports section is like Sports Illustrated, and the variety section is like People or something like it,” Morales said. “Every story that’s in print deserves to be in there and could be the main tease on the front page … We’re going to be covering the week of events in more of a broad sense than you would in the daily online publication.”

He used football as an example. “We used to have a lot of stuff in the Monday paper about the Georgia football games,” said Morales, who joined the paper as editorial adviser more than five years ago after a long professional career. “Now that’s all going to go online. We’re going to have a Sunday online edition focused on the football game. There’s not going to be any game stories in the sports section of the weekly print paper. We’re going to have features and trends. A story online about the football team might be about what a player did on the field. The story in the print publication might be a story on who the player is off the field.”

Financially in the Red or Black?

Among student publication advisers, skepticism about the paper’s digital shift centers in large part on its financial health. With online advertising not yet boasting revenues anywhere near print promos, how is the Red & Black going to stay in the latter?

Morales said, in part, it’s what is gained by being lost. “We’re now not printing five days a week,” he said. “The cost of printing all those pages and distributing them is money that we’re saving … There will also be some savings in pay to the students, and part of that comes with not having a daily paper. For example, to do this, we don’t need as many print designers.”

Additionally, according to Morales, the weekly’s advertising profits will be comparable with its daily predecessor. “We would put out 36 to 44 pages a week doing the daily papers,” he said. “The weekly section is going to be anywhere between 24 and 32 pages. A lot of our advertisers would advertise only once a week. So now they’re all advertising on Thursday [when the weekly comes out]. So, it’s still early, of course, but we see the falloff from our advertising being the people who advertised more than once a week, which wasn’t a lot.”

The newspaper’s website boasts a robust readership — garnering between 40,000 and 50,000 page views and 15,000 unique visitors per day during the school year — and has filled every advertising spot.

In recent years, the non-profit organization that owns the Red & Black has also diversified its financial potential via efforts such as publishing an area visitors’ guide and even selling parking spaces for home football games.

The last part of the Red & Black’s revenue push and rebranding effort is the launching of a magazine, known by the symbol &. As the paper explained, “Sometimes, there’s a need for an even more in-depth story. Or, something fun and quirky that is best shared via the glossy pages of a magazine. So once a month look for our new magazine … Yes, it’s pronounced ‘ampersand.’ Get it?”

Morales explained further. “It’s going to be like Esquire for UGA,” he said. “It was something the students wanted. We have a whole degree of magazine majors at the University of Georgia who just don’t come to the Red & Black because they don’t want to work for a newspaper. They want to write for magazines … We’re going to have one a month. It’s going to have a loosely based theme … The first one is obviously football, because it’s fall and we’re at UGA.”

“It’s funny how the students nowadays, they didn’t grow up with newspapers and they don’t read magazines,” he said. “But when they work for those publications, they want it to be in print. They don’t think online is as important as it is. I try to tell them, ‘Look, with online you can get way more reads than you can with print.’ They don’t quite grasp that. A print publication of a newspaper, by the next issue, everyone’s forgotten it. It’s in the recycling bin. And that’s what it is. That’s its purpose. Online, it’s forever.”