Your Guide to the U.K. Phone-Hacking Scandal (or ‘Hackgate’) 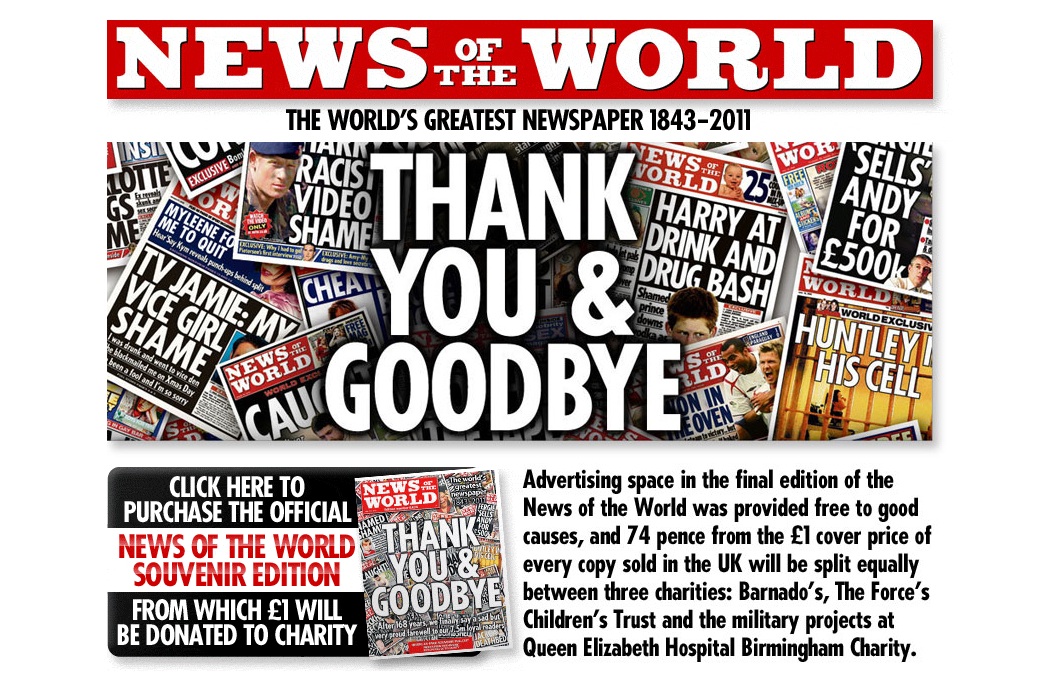 After 168 years, the News of the World was closed because of the fallout from the phone-hacking scandal.

From time to time, we provide an overview of one broad MediaShift topic, annotated with online resources and plenty of tips. The idea is to help you understand the topic, learn the jargon, and take action. We’ve previously covered Twitter, local watchdog news sites, and Net neutrality, among other topics. This week MediaShift U.K. correspondent Tristan Stewart-Robertson looks at the phone-hacking scandal.

To still use the terms “phone hacking” or “News of the World” to describe the scandal engulfing the British media is now somewhat insufficient.

[The Guardian's] multimedia coverage and interactive features on a continually moving and expanding story are second to none."

“Hackgate,” as it’s often called on Twitter, has really been going on since 2002, but didn’t explode until July 4, 2011 and has since dominated the news in the U.K. and increasingly abroad.

Without question, The Guardian has been the leader on the phone-hacking story from day one, and reporter Nick Davies will most certainly be the runaway candidate for “reporter of the year” at next year’s British Press Awards. The paper’s multimedia coverage and interactive features on a continually moving and expanding story are second to none.

The New York Times has also been a leader on the story, particularly with its September 2010 investigation into the subject.

“Blagging”: It might sound like a quaint English term, but it, too, is illegal. As the BBC summarizes, the Data Protection Act 1998 prevents someone from pretending to be another person for the purposes of gaining access to private data, such as medical records.

Phone hacking: The technical term for what private investigators, and some reporters, were doing for the News of the World is actually “illicit voice message interception.” It’s illegal to access someone else’s cell phone messages, usually by having one person call the phone, and while it is engaged, a second person calls and gets access to the messages. Most people wouldn’t think to change the standard manufacturer’s code, such as 9999 or 0000, to protect voicemail, and so it’s usually quite easy to access.

“Pinging” or phone tracking: Police can track a suspect’s cell phone by triangulation from nearby cell phone towers. But as the Guardian exposed, the News of the World allegedly paid police to access such tracking. If proven, both the bribery and obtaining of private data would be punishable.

Public Interest: When the British media talks about what is in “the public interest,” this is quite broad but has a specific legal backing which is referred to as The Reynolds Defense. The full case is here, but Wikipedia has a summary of it.

Regulation: Many commentators, when talking about possible statutory regulation of the press, cite the flaws of self-regulation, which currently takes the form of the Press Complaints Council and its code of practice. But regulation could mimic the Broadcasting Act 1996 which dictates fairness and balance in television news, and can invoke large fines for breaches.

Andy Coulson: Editor of the News of the World. He resigned in 2007 when phone hacking was first exposed with the criminal convictions of former royal correspondent Clive Goodman and private detective Glenn Mulcaire. Coulson later was appointed as chief of communications for Prime Minister David Cameron before resigning again this year.

James Murdoch: Chairman and chief executive of News Corp., Europe, and son of Rupert, he authorized out-of-court settlements for phone hacking, which he later said he regretted because he did not have all the information about the extent of the criminality. His evidence in front of a House of Commons select committee has now been questioned.

Rupert Murdoch: Chairman and CEO of News Corp. Political leaders considered he was essential to have on their side to be able to win British elections.

Rebekah Wade: Editor of the News of the World, then its sister paper The Sun, and then chief executive of News International until her resignation during the hacking scandal. She was editor at the time of the alleged hacking of the phone of murdered 13-year-old school girl Milly Dowler, which turned the public against News International.

In 2005, a story about medical treatment of Prince William led Buckingham Palace to suspect interference with his voicemail.

Goodman, the News of the World royal reporter, was jailed in 2007 as was private investigator Mulcaire. Coulson resigned as editor, and everyone claimed it was just a few bad apples.

In 2009, the Guardian returned to the story and exposed out-of-court settlements to public figures, suggesting there were thousands more potential victims, including celebrities and politicians.

On July 4, 2011, the Guardian revealed the hacking of Milly Dowler’s phone, which turned public attention dramatically to the story.

The next week, News Corp. announced it would stop its attempt to take over all of BSkyB.
And in the ultimate climax, the following week, James and Rupert Murdoch and Wade gave evidence to a House of Commons select committee.

The phone-hacking story traditionally would have started in print on July 5. Instead, the Guardian released it online first on July 4, giving other media a chance to pick up the story for the next day and hitting the social media sphere much earlier than Tuesday morning.

That very much fits into the strategy announced by the Guardian last month of digital first. Most, if not all, of the revelations from the phone-hacking scandal were broken online before print editions hit the streets in a battle for the public attention — and frequently mid-afternoon so ideally placed to catch the 6 p.m. TV newscasts and an American audience five or more hours behind.

Online coverage has also allowed for detailed timelines and data visualizations in the Guardian, as well as crowdsourcing from the Guardian and Telegraph (see below).

When news of the hacking of Milly Dowler’s phone first broke, outrage ensued on social media such as Facebook and Twitter. Although the public did not initially have papers in front of them to target particular advertisers with the News of the World, a campaign soon started.

Parenting forum Mumsnet helped drive the online campaign and pulled its own campaign from Sky television, which at the time News Corp. was trying to acquire.

Again, the Guardian was at the forefront of providing information, publishing the Twitter addresses of the top 50 News of the World advertisers.

Twitters users became perhaps the most active during the James and Rupert Murdoch testimony in front of Britain’s Select Committee on July 19, showing the speed of social media reaction. Within minutes of a protestor throwing a shaving-cream pie at Murdoch senior and the right-hook reaction from wife Wendi Deng, #piegate shot onto the Twitter trending list, only to be overtaken minutes later with #wendi.

The Guardian and Telegraph have both invited readers and users to get involved in sorting through data. The Telegraph released articles from the past decade in the News of the World that mention phone calls, voicemails and emails. The Guardian’s crowdsourced list of potential victims is currently offline to check accuracy. The Atlantic has also praised such efforts to tackle the volume of potential phone-hacking victims and associated data.

Laid Off: 200 [News of the World staff, according to its former political editor]

> What’s Your Current Interest in the Phone-Hacking Scandal? by Mark Glaser

> Who Is Ultimately Responsible for the UK Phone-Hacking Scandal? by Mark Glaser