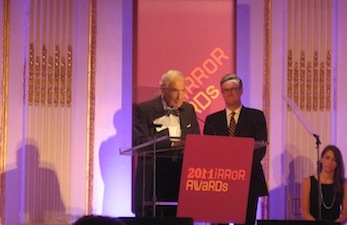 The media universe is more multifaceted, and confused, than ever, something Foursquare founder Dennis Crowley alluded to at the Mirror Awards on Tuesday.

“Even though we’re a technology company, we behave like we are a media company,” he said. “It’s a question people ask all the time: What is a media company?”

"Years after magazines realized that readers are turning to the web as a journalism resource, both the Mirror Awards and ASME decided they can't ignore online reporting." -David Kaplan

By giving Crowley and co-founder Naveen Selvadurai the i-3 award “for impact, innovation and influence,” the Mirror Awards were in essence acknowledging that even a location-driven social media service like Foursquare can be considered within the media sphere.

Founded five years ago at Syracuse University, the Mirror Awards are given to honor excellence in media industry reporting, and they’ve been following industry trends in becoming more digitally focused.

“We have tried to make more of an emphasis on digital journalism,” said Wendy Loughlin, director of communications for Syracuse’s Newhouse School, where the awards are housed. “It used to be we’d see a lot more entries in traditional media. We are also moving into the digital area, almost organically,” as more and more entries come in for digital categories such as “Best Single Article, Digital Media” or “Best Profile, Digital Media.”

Some of the more traditional journalists, too, acknowledged the effect digital is having on their work.

“This award is an example of why the blogosphere is a good idea,” said Eric Alterman, “The Liberal Media” columnist for The Nation, who won the award for “Best Commentary, Digital Media” for pieces he did at the Center for American Progress. Blogs, he said, subject mainstream media to scrutiny, and he couldn’t do his journalism without them.

“Before there was the blogosphere, there was not this scrutiny, and we had less truth in our media ecosystem,” he said in accepting the award. His three winning columns were about Fox News, coverage of the Gulf oil spill, and a critique of a New York Times story on Sinatra fandom in the Philippines.

But while the awards are moving to reflect the way media is today, most of them, as in every previous year, were for what we might call “the usual suspects” — a term I heard from more than one person at the event.

“Years after magazines realized that readers are turning to the web as a journalism resource, both the Mirror Awards and last month’s ASME Magazine Awards have decided that they can’t ignore — and shouldn’t be afraid of — online reporting,” David Kaplan of PaidContent.org told me in an email. “While it’s all well and good that online writing is being recognized, an institution like the Newhouse School, which is in the business of preparing people for the media future, should be placing greater emphasis on digital excellence with something more than a few additional categories.”

The awards were overwhelmingly given to white men based in New York or Washington, with one notable exception: Best In-Depth Piece, Traditional Media, went to Mary Van de Kamp Nohl, for her incisive portrayal of how executives ran the Milwaukee Journal-Sentinel newspaper into the ground.

“Thank you all for honoring what feels like an endangered species: investigative journalism in the Heartland. Or as many of you call it, ‘flyover country,’” Van de Kamp Nohl quipped to the bedecked audience at the swank Plaza Hotel in Manhattan.

Presenters Joe Scarborough and Mika Brzezinski of MSNBC addressed the suited and gowned crowd over salmon salad lunch under chandeliers and ceiling murals. Crowley jokingly bemoaned that by wearing a T-shirt rather than a suit he’d mistakenly worn his “start-up outfit.”

Other award winners included Gabriel Sherman for a piece about Fox News in New York Magazine, James Wolcott of Vanity Fair for Best Commentary, Traditional Media, and The New Yorker’s Ken Auletta for Best Profile, Traditional Media for his story on an Afghan media mogul.

Comcast founder Ralph Roberts, 90, accepted the Fred Dressler Achievement Award on behalf of son Brian Roberts, Comcast’s CEO, who couldn’t attend, he said by video, because he was in Lausanne, Switzerland, negotiating rights to the Olympics for NBC, which Comcast owns.

As a judge this year, and others, I’ve urged the Mirrors to move more into the current era, to find ways to acknowledge not just narrative writing and video, but also impactful forms that aren’t captured in just a few articles or videos.

What, for example, about the media blog that covers multiple aspects of the business and is a must-read for anyone in the media industry, and breaks news in its Twitter stream?

Or, what of the reporter who creates video, text and social media, and maybe even some graphics? How can we consider the entire package, its reach and impact, rather than comparing only text to text and video to video?

How about creative mashups, like the ones on EveryBlock combining Google Maps and police blotter reports?

Still, it is a bit hard to get terribly upset at the Mirrors for giving the awards they do. Auletta is, arguably, the best reporter about the media business in American history. “The pool of media journalists does tend to skew toward the white male,” Loughlin said.

She also said the Mirrors board is “looking at the tools that are transforming journalism and our industry, and the way communications is carried out these days,” adding that a researcher worked hard to increase submissions from new geographic areas and diverse ethnic groups.

An award-winning former managing editor at ABCNews.com and an MBA (with honors), Dorian Benkoil handles marketing and sales strategies for MediaShift. He is SVP at Teeming Media, a strategic media consultancy focused on attracting, engaging, and activating communities through digital media. He tweets at @dbenk.