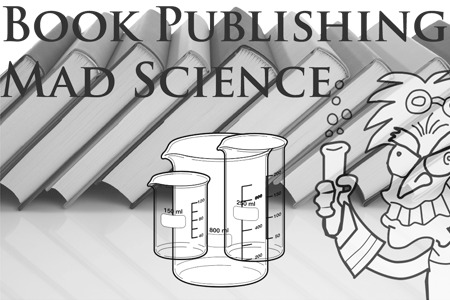 With big publishing buying only the crème de la crème of books, and more authors turning to self-publishing, many literary agents are getting squeezed right out of the middle.

Is the literary agent, formerly an ally, becoming the competition for publishers?

But some savvy agents are acting as literary consultants to help their authors self-publish, a role that offers up new opportunities and challenges for everybody in the industry.

I talked with three agents about their experiments to serve authors by widening their middle ground.

Ted Weinstein, a San Francisco-based agent who represents non-fiction authors, said that self-publishing “has added one more serious option for my clients when we are looking at all their possible opportunities.” He’s currently working with authors he has successfully placed with traditional publishers “to launch additional mid-length material and backlisted books using new self-publishing tools.” These tools include Amazon’s CreateSpace and Kindle Direct Publishing, Barnes & Noble’s PubIt, Smashwords, and more.

Big publishing is simply not set up to publish anything but books. Mid-length materials, worksheets, and other writing that might be downloaded from Amazon or directly from the author’s site are not in their repertoire. Neither do they help the author develop unpublished chapters into articles for placement in magazines. Though these kinds of supplemental materials help the author — and publisher — get attention and sales, the responsibility to create, distribute and publicize them lies with authors, many of whom turn to their agent.

Laurie McLean (left), an agent with Larsen Pomada Literary Agents in San Francisco, spent more than 25 years in high-tech publicity and marketing before she started her career as a literary agent. McLean, who also co-organizes the San Francisco Writers Conference and runs SF Writers University, knows how to work the web and social media. Like Weinstein, she says she is “incorporating self-publishing into every one of my clients’ career plans for backlist titles, experimental fiction, shorter works, and more.”

McLean supplements her agent business with Agent Savant Inc., to help authors discover their brand and create a marketing plan. “I can’t do social media for them, but I can show them the road map and get them started on their journey.”

Laura Rennert (left), senior agent with the Andrea Brown Literary Agency, has taken it a step further, pioneering an indie-publishing path for the agency’s authors. The first to debut is a young adult novel titled “Solstice” by P.J. Hoover, an author who previously published a series for younger readers with small press CBAY Books.

Rennert shopped “Solstice” to traditional publishers, and it even went to acquisitions at one house. She said that when it was finally rejected (because it was too similar to another book being published by a big name house), “we realized this was a concern we were likely going to run into elsewhere, so Hoover made the choice, in consultation with me, to go the independent publishing route and be the first to work with our agency in this capacity.”

“We are not becoming a publisher,” she said. “We’re building slowly, figuring things out, and adapting to the changing market and to our authors’ needs.” The agency handles formatting, conversion, cover design, jacket copy, editing and proofreading, with the author in complete control. “We also aggressively shop all sub-rights, including foreign, audio, and film/TV/performance,” Rennert said.

It’s an interesting paradigm shift — literary agency as publishing consultant — and there is no standard.

“I think we may be in our own bucket for the moment. We are not a packager or a publisher, and we are not acquiring or licensing rights from the author,” Rennert said in response to my observation that much of these services are provided by companies like Bookmasters. “We are not charging any fees … Our only compensation after recouping our clearly defined costs [formatting/conversion, cover design, and proofreading] which are agreed upon upfront and which we pass through transparently, is our standard 15 percent commission.”

So Hoover — “a fabulous self-promoter and a very talented author,” Rennert said — earns back her debt to the agency, and the agency gets 15 percent to cover “the hours and months we devote to editorial; figuring out how to position and package the book to reach the right market; the time spent on quality control; seeking out and dealing with high-caliber vendors providing the above services; and locating and vetting professional photographers and cover designers whose work is every bit as good as those used in traditionally published books.”

With the agency getting 15 percent, the author earns 85 percent. With this model, authors may soon be flocking to agencies for publishing instead of for representation to big publishers. Is the agent, formerly an ally, becoming the competition for publishers?

“The answer is that authors are driving this trend in publishing,” Rennert said, “and it is my job as a literary agent to represent my author’s interests … My role is to help them navigate the publishing landscape and maximize their potential.”

While Rennert’s agency seems to have settled on a 15 percent commission, Weinstein is still working out various fee-based and royalty services for the myriad of projects his authors need. And McLean charges $500 for a litany of deliverables in her Agent Savant package.

Today, self-publishing has lost its stigma, with agents and big publishers thinking of it as a market test. So for authors who dream of gaining an agent and a publishing house, don’t worry that self-publishing will hurt your chances — though building a platform is essential. Hoover successfully self-published three previous books before Rennert took her latest project. Weinstein looks for platform and the ability to self-promote. If self-published authors sell more than 5,000-10,000 copies of their book, “at a minimum,” he said, that gets his attention.

One of Weinstein’s authors is Peter Montoya, who he placed with McGraw-Hill, and whose self-published book “The Brand Called You“ sold 60,000 copies worldwide.

McLean found her first self-published author, Kait Nolan, by reading her comments on a blog. McLean was impressed by her advice. “So I went to Kait’s blog (conveniently appended to each of her comments), read her free e-novella, paid 99 cents for the sequel, and by then I was hooked on her combined strengths of writing style, unique voice, mastery of social media, and gutsy attitude. She also posted that she’d sold 1,000 copies of her 99-cent novella in the first month it was available, so I knew she was on top of the business end of things, too.”

For authors faced with choosing a DIY self-publishing package or starting their own small press (with the burden of fronting the expense of editorial and design), it’s a clear win. But for the agent? It’s too soon to tell. “It’s a newer venture for us,” Rennert said, “so success isn’t yet proven.”

These agents are right in the middle of the whirlwind, playing with various consulting services and fee structures to see what works. But they all share one quality: excitement about the ability to help their authors succeed by experimenting with new publishing tools and technologies, paying attention to this rapidly changing marketplace, and creating their own models while the industry nervously watches.

> “Literary agents open the door to self-published writers“ by Alan Rinzler, on his blog The Book Deal: An Inside View of Book Publishing.

Carla King is an author, a publishing consultant, and founder of the Self-Publishing Boot Camp program providing books, lectures and workshops for prospective self-publishers. She has self-published non-fiction travel and how-to books since 1994 and has worked in multimedia since 1996. Her series of dispatches from motorcycle misadventures around the world are available as print books, e-books and as diaries on her website. Her newest book, The Self-Publishing Boot Camp Guide for Authors, was released in February 2011.