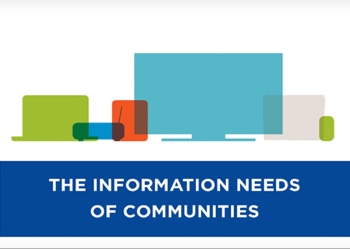 A consensus has begun to emerge around the Federal Communications Commission report, “The Information Needs of Communities,” released Thursday: The diagnosis is sound, but the remedies are lacking.

The 465-page report (see full report, embedded below) is the result of 600-plus interviews, hearings and reams of research conducted over 18 months. It represents the most ambitious attempt yet to come to terms with the consequences of the current media transformation. It’s a synthetic and comprehensive look at the entire ecosystem — commercial, non-commercial and user-generated; across print, broadcast, online and mobile — making it a tremendous resource for advocates, journalists, entrepreneurs and media educators.

Steven Waldman, journalist, editor and digital news entrepreneur, was lead author for this project and worked with a distinguished team of experts from across the country to compile both capsule histories of each sector and an atlas of current facts and figures. See the gallery of graphs from the report below, assembled by Josh Stearns of the media reform organization Free Press, for a sense of the range and depth of the research. (Overwhelmed? A two-page summary of findings and recommendations is also available here.)

The primary conclusion echoes that of many recent reports: Amid vibrant experimentation by a broad range of news producers, local reporting is in the biggest trouble. There are less ad dollars for newspapers, fewer reporters on the beat for both print and broadcast, fewer enterprise investigations, and more “hamsterized“ reporters, all resulting in a gap in the ability to hold governments and corporations to account.

The report also represents an unprecedented effort by the FCC to take stock of the results of previous policy decisions supporting non-commercial and community media. Rather than focusing solely on public broadcasting as the answer to commercial news woes, as many recent analyses have, this report acknowledges the growth and dynamism of a broader non-profit news sector:

More accurate than “public broadcasting,” the term “non-profit media” better captures the full range of not-for-profit news and media organizations. Some non-profit media groups are affiliated with public broadcasting, some not; some receive government funds, most do not. But what these groups have in common is this: they plow excess revenue back into the organization, and they have public-interest missions that involve aspirations toward independent journalism.

The report’s authors see the growth and vigor in this sector as promising, and even have some kind words to say about public access stations, often dismissed or left entirely out of the local news equation. However, they also confirm that news production by non-commercial outlets is still not sufficient to fill the yawning gap in local reporting that has opened up over the past decade.

What’s more, stable business models for such outlets have not yet emerged, and the federal funding that undergirds the largest swath of non-commercial outlets, public broadcasters, is under political threat. Corporation for Public Broadcasting funds that were supporting digital innovation were slashed this year, as were funds earmarked for buildout of new station infrastructure.

To add insult to injury, Waldman & Co. note, public interest obligations for commercial stations have been defanged, offering no way to ensure diverse or high-quality local public affairs coverage. Those requirements that remain are rarely enforced.

Yet, bafflingly, despite identifying these clear market gaps, the report stops short of offering bold solutions, perhaps in reaction to the currently charged political and funding climate. Instead, as several commentaries — such as this piece in GigaOm — note, the resounding message to the media industry is “don’t look to us, we can’t help you.” GigaOm’s Matthew Ingram writes:

One of the biggest trends that the FCC flags as important in the report is the loss of what it calls “accountability” journalism, in which news outlets on a local and/or national level cover the government and thereby act as a check on power. As more than one person has noted, this conclusion isn’t exactly a news flash that required government funding and two years of research to unearth, but is arguably still worth highlighting, since it’s a gap that has yet to be filled.

And what does the FCC think can be done to fill it? Not much.

Commissioner Michael J. Copps objected emphatically to this laissez-faire approach at the report’s release; he was the first to observe that “the policy recommendations … don’t track the diagnosis.”

For some conservatives and the entrepreneurially minded, that’s just fine. “I think I’m relieved that, on first scan, the FCC report on journalism recommends little,” tweeted CUNY’s director of interactive journalism Jeff Jarvis. As Waldman explained at the release event, a primary goal of the report’s recommendations was to protect the First Amendment, a priority that sits well with libertarian commentator Adam Thieirer. He blogged his initial reaction at the Technology Liberation Front site:

For those of us who care about the First Amendment, media freedom, and free-market experimentation with new media business models, it feels like we’ve dodged a major bullet. The report does not recommend sweeping regulatory actions that might have seen Washington inserting itself into the affairs of the press or bailing out dying business models.

So, what kind of remedies should the report have offered? Of course, I have my own ideas about how taxpayer dollars can best support civic engagement and innovation — many of which I’ve reported on in the pages of MediaShift. I also have my own stake in this report, which cites research that I’ve conducted with colleagues at the Center for Social Media and the New America Foundation — see the annotations in the embedded version of the report below for some highlights.

But, as several observers noted, the report will do its job if it spurs broader conversation about how best to support the evolution of news. That process has already begun.

And, you can read the full document here:

Jessica Clark is a Senior Fellow at American University’s Center for Social Media, a Knight Media Policy Fellow at the New America Foundation, and is currently consulting with the Association of Independents in Radio on a forthcoming initiative.