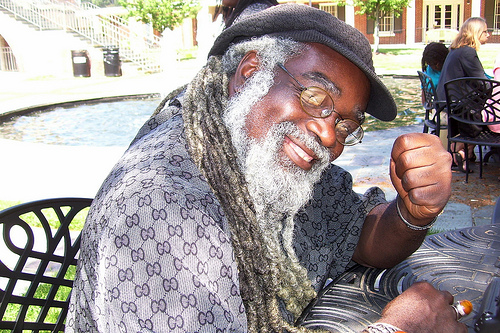 Paradise Gray, founding member of One Hood in Pittsburgh, hangs out in a patio area at the University of North Carolina-Greensboro. Gray, a multimedia producer, was part of a group that pitched a project called "Show me your ID." The pitch teamed up with another group to win a combined $1,000 grant. Photo by Bill Densmore.

The Greensboro 52. That’s the label a group of journalists, students, educators and community members adopted during the Create or Die 2 conference in Greensboro, N.C., which took place June 2 to 5.

The label takes its inspiration from the Greensboro Four, African-American students at N.C. A&T University who sat down at a lunch counter at Woolworth’s in 1960. Others joined them, launching a sit-in movement for civil rights across the South.

The Create or Die 2 participants hope to be just as viral.

The first Create or Die gathering was held in Detroit in 2010. The project, part of Journalism That Matters, describes itself as a collaboration supporting new creators of news and information.

One wall held metaphorical tweets, or short thoughts shared by those at the meeting.

Bill Densmore, director of the Media Giraffe project at the University of Massachusetts, Amherst, said at the end of Create or Die 2 that the event inspired the upholding and spreading of traditional journalism ethics and values, “by any means necessary.”

If that means spreading the standards of investigative journalism through hip-hop and biofueled buses, so be it, said participants at the conference, which took place at the University of North Carolina-Greensboro.

Actually, the “conference” was designed as a structured unconference, with attention paid to things like seating arrangements and story-sharing to build trust and interaction, within a schedule that allows for concrete idea pitches and tours of the community. Journalism was loosely defined, or perhaps redefined, to include mission-driven efforts and storytelling in a broad sense across various platforms.

Peggy Holman, co-founder of Journalism That Matters, and Michelle Ferrier, associate professor at Elon University, were primary organizers, holding weekly calls with volunteers and building an online community before the event.

Holman has been organizing Journalism That Matters programs for years, and Ferrier brought the gathering to Greensboro, to take inspiration from the International Civil Rights Center and Museum and build ties and journalism capacity in the state.

Michelle Ferrier, a professor at Elon University, opens up the conference at the Elm Street Center in downtown Greensboro.

Three incubators in the center of North Carolina offered support for startups emerging from the conference. Sponsors also offered $500 grants to groups who pitched ideas at the gathering.

Homewood Nation won a $500 grant for efforts to build online and offline community in a challenged neighborhood in Pittsburgh.

Two other $500 grants were combined and went to a creative, diverse group that formed at the gathering.

Members were mostly young, scattered from Los Angeles to Charlotte. They shared ideas, backgrounds and skills at the conference and made plans to launch a new website aimed at letting people claim and control their online IDs.

Create or Die has plans for a biofuel bus tour to spread the word of the project to underserved communities across the country.

A week out, the conference’s impromptu hashtag, #g52, was still going strong on Twitter.

Holman, one of the organizers, reflected on the spirit of the conference in an email afterward.

“If we want to create a more multi-cultural view of the news that is reflective of our changing demographics, we need to shift the mix of providers from the 85 percent of white mainstream journalists that exists today,” she wrote. “Yet less than 10 percent of foundation funding is going to people doing online news and information in underserved communities. That’s a reason for a wakeup call.”

And Ferrier said in an email that the conference isn’t really over.

“The gathering is still unfolding,” she wrote.

Andria Krewson is a community news editor for The Charlotte Observer and has written about hyper-local journalism for PBS Mediashift. Reach her through http://andriakrewson.com