4 Filmmakers Use Social Media to Crowdsource Their Stories 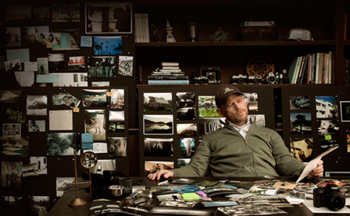 Ron Howard's Project Imgain8ion promises to be "the first user-generated photo contest in history to inspire a Hollywood short film."

The second line of filmmaker Tim Burton’s new short story is this:

It is, of course, a tweet — and one that encapsulates a new participatory era where contributions and voices from the public are reflected in all forms of art and storytelling, film included.

One of the early adopters of emerging media was filmmaker Kevin Smith, who now has a thriving personal media empire via a popular podcast (SModcast), nearly 2 million Twitter followers and even his own iPhone app. While Smith is a standout in digital engagement, he isn’t the only one experimenting with today’s digital connectors: Facebook, Twitter and YouTube. These four prominent directors have embraced new media tools and social networks to connect and co-create with audiences, and their projects are capturing a new kind of imagination.

Last year, director Tim Burton embarked on his own big storytelling adventure on Twitter around a character named “Stainboy,” as the “Tim Burton” exhibit opened at the Toronto International Film Festival (TIFF) Bell Lightbox. Called #BurtonStory and integrating a sequential storytelling technique called Cadavre Exquis or “Exquisite Corpse” (Burton’s 2005 film “Corpse Bride” was nominated for an Oscar), users submitted tweets and the best one each day was added to the story. From the 88,967 tweets submitted, 87 were selected from 2,141 users.

This open, participatory approach to storytelling gave people access to perhaps a new iconic Burton character — from the mass-marketed “Batman” to the mass-created “Stainboy.” The “Tim Burton” exhibit is currently at the Los Angeles County Museum of Art through Halloween.

Oscar-winning director Ron Howard (“A Beautiful Mind,” 2002) partnered with Canon on Project Imagin8ion, “the first user-generated photo contest in history to inspire a Hollywood short film.” Shutterbugs are encouraged to submit their photos for a chance to be one of eight grand prize winners (prizes include camera equipment, a trip to the film’s premiere and a meeting with Ron Howard).

Photos will be judged on how imaginative and inspiring they are in eight categories: Setting, Time, Character, Mood, Relationship, Goal, Obstacle and Unknown. The deadline has already passed for submitting photos, but you can still vote online for your favorite images among the finalists. Here’s a video explaining the contest:

As previously discussed, Ridley Scott (director of “Gladiator” and “Blade Runner”) produced a crowdsourced YouTube project titled “Life in a Day“ — a documentary that “tells the story of a single day on Earth” on July 24, 2010.

The film, directed by Oscar-winner Kevin Macdonald (“One Day in September,” Best Documentary in 2000), strives to be the largest user-generated feature film ever created. The ambitious film project received more than 80,000 video submissions. National Geographic will release the movie in theaters on July 24, the one-year anniversary of “the day.” And if the movie fails to entertain or attract audiences, we only have ourselves to blame (especially those who submitted videos or curated them).

Twitter has become an immediate, collaborative tool for many filmmakers on and off the set. To help write jokes for his speech at the Producers Guild Awards, Judd Apatow hit up his community of followers. Apatow (“Bridesmaids,” 2011, “Knocked Up,” 2007) included this joke from omitofo</a>: "Inception is really about Hollywood. Everyone's constantly trying to ruin your dreams so they can make a buck." Follow Apatow on Twitter (<a href="http://twitter.com/#!/juddapatow">JuddApatow) and tell him a joke. If you’re lucky, he may just use your creation to amuse and entertain others.

Whether we collectively tell the story of a character, offer up a single joke or jointly experience a single day, all these examples point out how social media is opening doors for the public to the big screen.

What filmmaker would you want to collaborate with to share your story?

Nick Mendoza is the director of digital communications at Zeno Group. He advises consumer, entertainment and web companies on digital and social media engagement. He dreamstreams and is the film correspondent for MediaShift. Follow him on Twitter @NickMendoza.