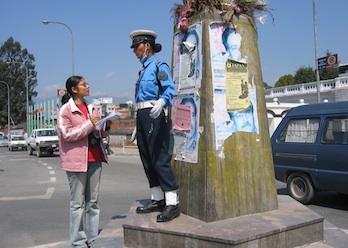 About seven years ago, Global Press Institute founder Cristi Hegranes was working as a foreign correspondent in Nepal. During a visit to a village in the Eastern part of the country, Hegranes offered a pen and notebook to the matriarch of the village, and asked her to write down her own story.

“What she came up with was a really powerful piece of journalism,” Hegranes said.

"We train women from all walks of life. It doesn't matter if they've used a computer before, or the Internet before, those are all skills they get in our training." -Cristi Hegranes

If only the matriarch had some journalism training, Hegranes thought, couldn’t she tell this story better than foreign freelancers? Why would foreign correspondents, who often sweep into foreign regions during times of crisis, be better suited to report on a country and a culture than the people who call that place home?

Cristi Hegranes started the Global Press Institute to help women across the globe tell their stories.

Hegranes is part of a wave of leaders who are re-envisioning the scope, style and business model for international journalism. With the near extinction of American foreign news bureaus, and the growth of participatory media, these journalists-turned-entrepreneurs are rethinking global reporting models and training people to do journalism in foreign lands.

Three of these organizations include Hegranes’ San Francisco-based Global Press Institute, Seattle-based Common Language Project and Minneapolis-based Round Earth Media. All three provide a platform for social justice stories from under-reported parts of the world.

Hegranes’ business concept revolves around a desire to paint a more holistic picture of the world’s people. She turned her idea about the village matriarch into a reality when she opened up her first newsdesk in 2006 in Chiapas, Mexico. Since then, she’s opened up 23 newsdesks around the world in India, Zimbabwe and Brazil, to name a few.

Once GPI picks a new location for a newsdesk, the organization trains and hires on-the-ground staff: an editor, a program director and about five reporters. “We train women from all walks of life. It doesn’t matter if they’ve used a computer before, or the Internet before, those are all skills that they get in our training program,” Hegranes said.

GPI uses journalism as a development tool to educate, employ and empower women.

“Generally speaking, we get report after report indicating that when men get skills-based training they tend to take that training out of their local community,” Hegranes said. “Statistics show that women tend to invest 90 percent of their salary locally.”

Other development organizations that focus on women pay for them to do traditional crafts. Those are important, and there’s a place for that, Hegranes said, but these jobs relegate women to the same position they’ve been in for decades, and continues the cycle of poverty. GPI, on the other hand, gives women literate leadership roles.

GPI content revolves around social justice issues including climate change and education. The emphasis on these kinds of issues, Hegranes said, represents a return to American journalism’s muckraking roots, reminiscent of Ida Tarbell and McClure’s Magazine from the early 1900s.

GPI articles are published on the non-profit’s website and distributed to more than 35 content syndication partners including Reuters, UPI, Lexis Nexis and Women’s eNews. Syndication comprises 10 percent of GPI’s budget. Hegranes aims to make GPI fully funded through syndication by 2020.

Hegranes has also revamped her online fundraising strategy, which is outlined in a Stanford Social Innovation Review article. The strategy, which involved simple things like changing the fundraising language on their website from “gifts” to “social investments” tripled the number of online donations in six months. Rather than having individuals contribute to the organization in general, they enlist people to invest in a place, people or journalism. Investing in a place is the most popular option, according to Hegranes.

While GPI trains women to be journalists, the founders of the Common Language Project do original reporting, and also provide a platform for freelance contributors.

CLP focuses on “personal” international stories, according to co-founder Jessica Partnow. “We wanted to find that one individual person whose experience ties into broad political issues or economic issues or environmental issues, whose day-to-day life has been affected by those big issues,” Partnow said, “because we felt that’s what was missing, and what our generation wanted to see in the news.”

For the CLP, “personal” also includes first-person narrative-style writing. The CLP recently added a commentary section to its website, which features first-person narratives from freelancers around the world. This style enables journalists to insert emotions and insights into their writing. “It’s the kind of writing that I think really helps communicate and helps people understand the context of what is really going on,” Partnow said.

In 2008, the CLP won a Knight-Batten award for interactive journalism for its series “Water Wars,” which explored the role of drought in fueling conflict in Kenya and Ethiopia. A single multimedia package about Lake Victoria included a radio version, which aired on NPR; a newspaper article which was published by the San Francisco Chronicle; and visual elements (a video, photos and a map) that were posted to the CLP’s website. Here’s one of the videos:

Troubled Waters: The Coming Calamity on Lake Victoria from The Common Language Project on Vimeo.

“Part of the idea is that on our site all of those things come together on one story page,” Partnow said. “Our site is designed to combine multimedia elements in the way they’re meant to be combined.”

The University of Washington’s journalism school hired the three CLP founders as full-time lecturers in 2009, as part of the university’s effort to tap into Seattle’s burgeoning non-profit new media movement. That gave the three founders economic security, but didn’t necessarily create a funding source for the international journalism they’re committed to doing.

For example, if CLP fundraises for a reporting project in Asia, it might reach out to the Asian American Journalists Association or the Association of Women in Communication. It’s about “finding sweet spots and facilitating those relationships,” Partnow said.

Partnow said she will show donors the direct impact donations have on specific projects.
“Consumers haven’t had to be faced with the cost of enterprise or international reporting until recently, because it’s been subsidized by something we didn’t have to think about for a long time.”

Mary Stucky of Round Earth Media, which supports freelance reporters working on under-covered stories across the globe.

The idea for Round Earth Media started small. Mary Stucky wanted to do independent international journalism. She and her friend Mary Losure, another reporter, applied for and received a grant from the Kellogg Foundation to do a story about NAFTA. “At that point we thought we were two veteran journalists who would have a nice life getting grants to do international trips,” Stucky said. “It evolved because we were watching what was happening in journalism.”

Round Earth is mostly funded by grants and contributions, but the organization has experimented with for-profit funding models. In April, Stucky was negotiating a partnership with Social NewsLine, a public relations firm. For a fee, Social NewsLine would have distributed news releases about businesses, non-profit organizations and academic institutions to Round Earth’s Facebook wall. Social NewsLine was prepared to pay the majority of the costs of an upcoming project in India.

Stucky, along with her board of directors, ultimately decided to scrap the partnership with Social NewsLine. “Despite all the safeguards we put in place, we decided we are not going to be able to counter the perception that the journalism could be influenced,” Stucky said. In the end, journalistic ethics trumped Round Earth Media’s need for alternative funding. “The entrepreneurial path is never a straight road, and this has certainly proven that.”

But Stucky said she’s determined to pioneer an innovative funding solution. As an entrepreneur, she says she realizes this might result in multiple tests and failures, but she’ll never know what works unless she tries it out.

Rebecca Wolfson just finished up her final semester as a graduate student at the University of Missouri journalism school where she was executive producer of Global Journalist, a weekly public radio talk show that analyzes international news from journalists’ perspectives. This summer she will be a Carnegie-Knight News21 Fellow at UC Berkeley.