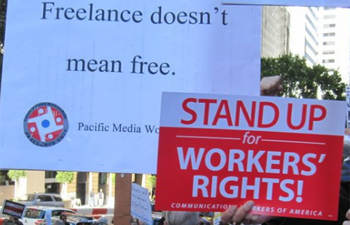 Welcome to the third episode of “The Mediatwits,” the new revamped longer form weekly audio podcast from MediaShift. The co-hosts are MediaShift’s Mark Glaser along with PaidContent founder Rafat Ali. This week’s show looks at the recent $105 million lawsuit brought against Huffington Post for not paying its bloggers, as well as our grades for AOL’s various business moves, including the hyper-local Patch sites and buying TechCrunch.

I would say @FakeAPStylebook was a contributing factor in me having the job that I have now. Success in social media is the Holy Grail for any company." - Ken Lowery

Our guest this week is Ken Lowery, one of the co-editors and co-authors of the @FakeAPStylebook on Twitter and the new book “Write More Good.” Plus, we give first impressions on the new “Street Fight” online magazine about the hyper-local news business.

Mark switches from AT&T to Verizon

5:00: Rafat thinks the web is built on user-generated content

17:55: How the Bureau Chiefs started with a Gmail group

27:40: Rafat thinks it’s a longshot to bring in revenues

The Unpaid Writers’ Lawsuit Against Huffington Post is Bunk at Slate

Is Blogging for Free Better Than Nothing? at WSJ Speakeasy

About that Lawsuit… by Arianna Huffington

Be sure to vote in the MediaShift poll about the future of AOL: