Video: Robert Scoble on How to Build a Career in Media 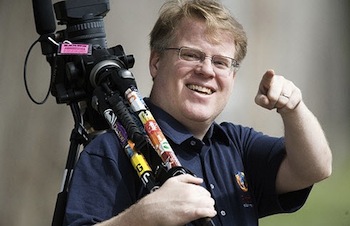 Robert Scoble said those looking for a career in media need to think like entrepreneurs. Image via Business Insider

I don’t know about you, but when I want to find out about the newest tech stuff, I read blogs and their related Twitter feeds. As a newspaper journalist, it puzzles me that somehow those blogs, with their limited resources and short history, manage to beat the mainstream media.

Take, for example, uber-blogger Robert Scoble. When Flipboard’s servers went down around the time of its launch, some said it was because of a positive review on his blog, Scobleizer. Scoble currently works for hosting company Rackspace as a kind of online media ambassador, but he’s also a media brand of his own.

So, when I met him a few weeks ago at the Lift conference in Geneva, Switzerland, I wanted to talk to him about how bloggers can outsmart mainstream media, and what this means for aspiring journalists, among other things.

During our conversation, which is captured in the below video, Scoble made five key points about breaking into media and building a brand:

Scoble said journalism departments don’t focus enough on equipping students with entrepreneurial skills. In his view, this is because mainstream journalists have traditionally relied upon other people in their organization to find an audience and handle distribution.

“In this new world you need to do a lot of that hard work yourself,” Scoble said.

This hard work has its advantages. By taking control of distribution you cut out the middle men and are able to control your content. By working on attracting an audience, you have the opportunity to build a stronger connection. Distribution is today less of an issue — the hard thing is getting people to pay attention to what you’re doing.

No matter what you end up doing — whether you start your own website or company or work to push innovation at an established organization — you’ll need to develop a deep understanding of what it means to be a new media entrepreneur, according to Scoble.

Here’s my video chat with Scoble:

What do you think? Is Scoble correct about the skills needed by today’s journalists? Share your thoughts in the comments.